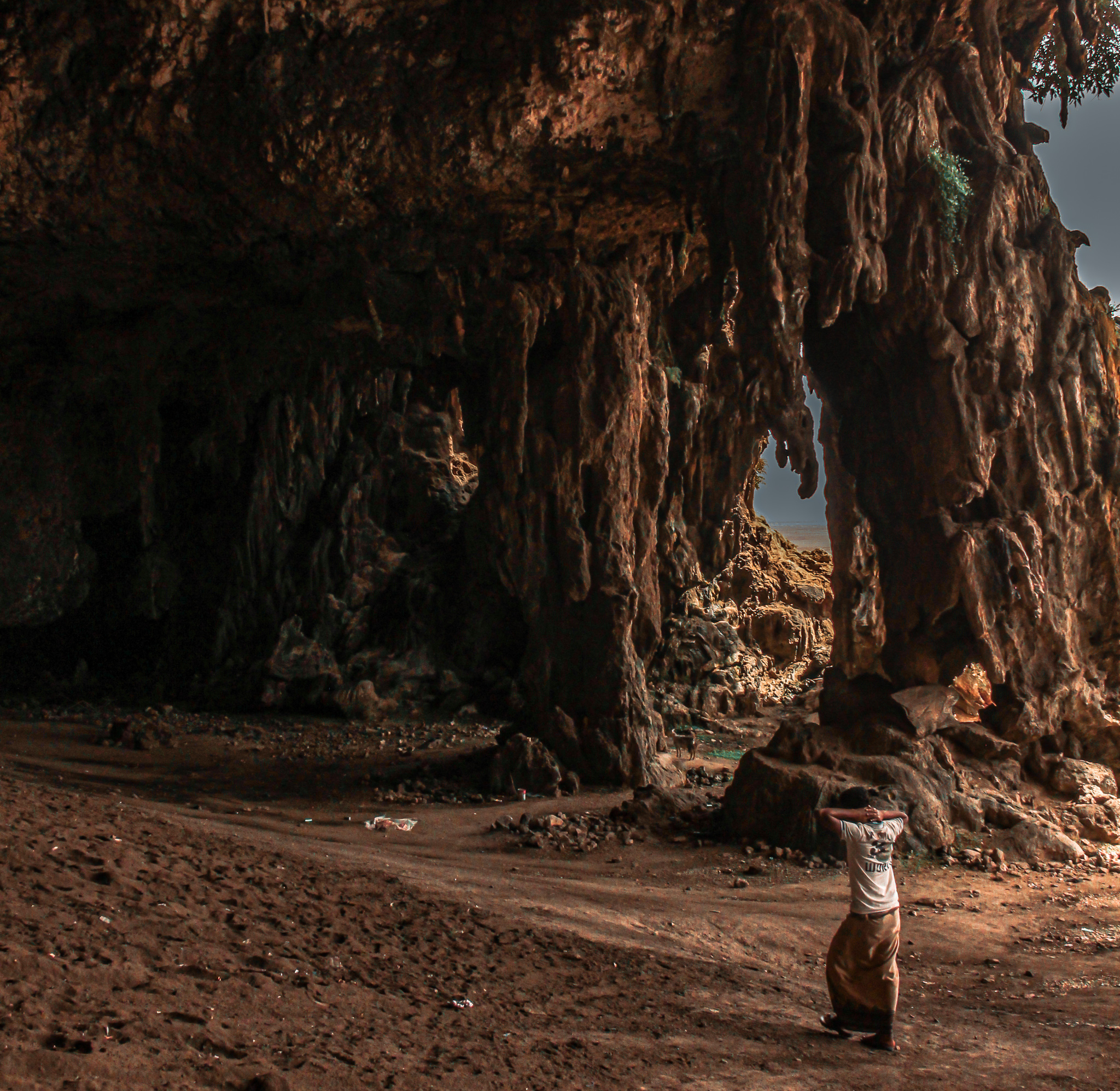 The drive-in cave escapade at the massive cave in Socotra

Our next stop after the beautiful Wadi Dirhur canyon was the massive Dogub cave. It was a couple of hours’ drive away from the canyon and we started early before the day got too hot. Socotra as I mentioned before, despite being drop-dead gorgeous, is a harsh place and blazing sun and strong winds make it a hostile environment. Dogub cave was located in the southern part of the island and though not as spectacular as Hoq, Anwar guaranteed that it was a very unique place. I did not disbelieve even once since Socotra island has a very interesting and complex cave network. In the past, many archaeological finds have been discovered in the bigger caves and these were telltale remnants of prehistoric humans to ancient sailors’ scribbles.

The drive to Nogid

Dogub cave was in an area called Nogid and it was dry, red, and inhospitable. At the time of my visit, Nogid had recently received an asphalt road, and Socotra’s only highway connected it with the rest of the island. Huge rocky hills bordered the arid plains of Nogid and a beautiful blue ocean lay on its other side. Dazzling white sand dunes rolled along the coastline and in comparison, the rest of the area looked sparse with dry, leafless, scrubby bushes. Camels roamed Nogid plains in herds and only a few human settlements were scattered along the vast expanse. We were again close to the sea, with the cool highlands left behind, and most of the time of the year, harsh winds blew into Nogid.

The dry arid plains of Nogid

The dry arid plains of Nogid

Nogid was Anwar’s favourite place in Socotra and he simply loved the dry, inhospitable looking landscape of the south. The drive from Diksam Plateau to Doub cave was a very interesting one and the scenery changed rapidly as we neared the ocean. The mountain slopes slowly slanted down to plains that held dry river beds and sheets of grey lava rocks rocky slopes held swollen trunks of the desert rose trees. These grotesquely shaped flowering trees grew in neat rows as if in a plantation and a few small caves hidden behind them held actual homes. Small pieces of cloth strung at the mouth of the caves served as curtains and behind their privacy, standalone families with their entire herd of animals lived.

The desert rose trees of Nogid

The massive shelter of Dogub cave

The most beautiful part of Nogid was its stunning rock formations and Dogub Cave was a yawning hole in one of them. The access to the cave had been fairly easy and the size of the cave took me by surprise. Picturesquely twisted stalagmites guarded the mouth of the cave and the sweeping interior was large enough to hold at least 20 cars. Several small chambers bifurcated inside the cave and dripping thin streams created small natural wells of fresh water. This was a very precious commodity in Socotra and the water streams of Dogub cave attracted many herders, animals, and birds. A severe bat stench also pervaded the interior of the cave and as usual, I shared my mattress and lunch with many inquisitive goats, a lonely sheepdog, and a bunch of curious locals.

The second day at Zahak

As much as I liked Dogub cave, the bat stench along with some suspicious “turdy” looking things in its background appalled me a lot and I could not wait to get out of there. Our destination for that day was Zahak, an area known for its beautiful snowy white sand dunes and I was very eager to see them in daylight. Massive mountain-sized shifting sand dunes are one of the highlights of Socotra and these mounds shifted in position and size according to the island’s inland winds.

My last sight of Diksam Plateau

A Bedouin hut at Wadi Dirhur

The island gets drier towards Nogid

The stony mountains of Nogid

The dry part of Socotra

The ocean appears as we leave the central highlands

The rolling dunes of Zahak

Socotra is all about beautiful falling light