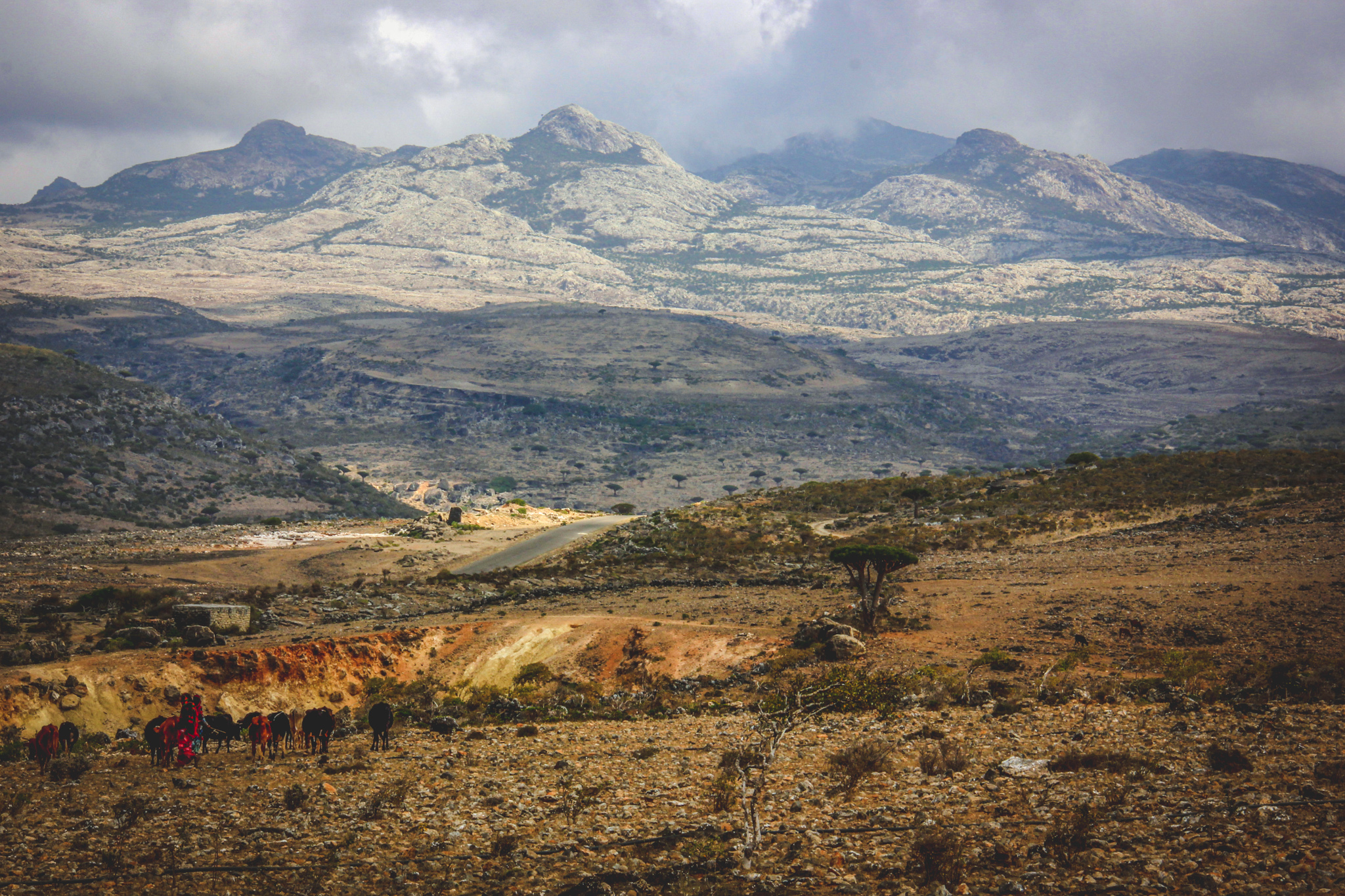 How I ended up on the Socotra island

I first came to know of the Socotra island when I was in school. A brilliant TV commercial featuring the magnificent blood dragon tree, which is found only in Socotra made my jaw drop and I wanted to visit the island just to see that alien-looking plant. The image and the mysterious island never left my mind and more than a decade later in 2016, when a locale hunt took me to Socotra, I could not believe my luck. The opportunity which seemed too good to be true completely taken me by surprise and I rushed headlong into digging out Socotra island information. Internet, however, yielded very few results, and apart from a glaring TRAVEL ADVISORY on Yemen, I hardly found anything that was usable. It took a year from the day of getting the project to the actual travel date and the last traveler review of the island was dated 2010. Travel help arrived in the form of an ex-colleague, who is an avid angler. Being a commercial airline pilot, he has the opportunity to travel to the remotest corners of the earth, and his photo series of Socotra on a social media site caught my attention. He got me connected with his local Socotri friend and before I knew it, I was off to one of the most isolated islands on earth.

Socotra island is called the Galapagos of the Indian Ocean

Socotra island is isolation personified. Cut off from the Yemeni mainland and located close to the Horn of Africa, this archipelago of four islands is termed as the “most alien-looking place on earth”. Technically it belongs to the small Arabian nation of Yemen, but its language, culture, lifestyle, food habits, and demography differ completely from the mainland. Often referred to as the “Galapagos of the Indian Ocean”, this hard to access island houses some of the world’s rarest flora, which is not found anywhere else on earth. In fact, a third of the island’s incredible plants are endemic and this has lead to Socotra island being designated as a UNESCO World Heritage Site. At the time of my visit, Yemen was undergoing civil unrest and the entire government collapsed during my stay. The mainland quickly became a big political mess and I flew to Socotra island before to escape the situation. At that time, I had no idea how things would evolve and for me, the Socotra dream was finally coming true.

You may also like: YEMEN CRISIS AND MEMORIES OF OLD SANAA

A lonely Bedouin woman of Socotra

Ancient Gujarati mariners called it the “island of bliss”

Socotra at that time was accessed only by flight and only two airlines, Felix Airways and Yemenia flew there.  The flight to Socotra went via the arid coastal town of Mukalla and it is a brief journey from the Sanaa. The stark differences between the island and the mainland were clear the moment I landed at the brand new airport. Socotra island nestled in a cocoon of peace and normalcy and it was free from any restrictions and void of any signs of unrest. Socotris also looked completely different from the Arab Yemenis and they had a unique mix of Indians, Malays, and African features. Interestingly, that is not the only Indian connection of Socotra and for centuries, the sailors of Gujarat in India called the maritime route near Socotra, “Sikotro Sinh” or the “Roaring Lion of Socotra”. Many historians believe that the island had got its name from a Sanskrit word “dvipasukhdhara” meaning “island providing bliss”.

This is the island of precious herbs and plants

However, it is the Arabic translation of its name (souq = market, quotra = dripping frankincense) that brings out Socotra’s real glory and that is the island’s abundance of frankincense, myrrh, and other valuable herbal products. In fact, frankincense and myrrh had put Socotra island firmly on ancient maritime charts ad Socotri folk tales recount bygone days when the island was a huge hub for traders, sailors, and pirates. Human evidence in Socotra island was traced to prehistoric times and inside one of the island’s huge limestone cave, multilingual inscriptions were found. From Indian Brahmi, Greek, Bactrian, Ethiopian to South Arabian languages, those scribbles were left by sailors who visited the island between 1st century BC to 6th century AD, and thus, it is not difficult to understand why Socotra was called the frankincense souq.

This island seems to be frozen in time

Socotra island has a frozen in time quality

In modern times, only the Somalian pirates used the island as a refueling stop for hijacked vessels and all this weighed on my mind, as my rental 4 * 4 navigated out of the tiny airport area into Socotra’s vast open sunshine. A straight road went towards the main town of Hadibo and it was the only road on Socotra island. The first thing which struck me about Socotra was its uncluttered open space. The island had a misty cluster of highlands in the center and the blue ocean bordered the road, as it went past the date palm plantations and ancient-looking stone villages. It also had an almost unreal “frozen in time” quality and the simplicity of the islanders’ lifestyle is hard to believe. I stayed on the island for some time and Socotra mesmerized me every single day. Although it was the blood dragon tree, which drew me to the island, Socotra’s spectacular beaches, shifting sand dunes, massive yawning caves, open rolling meadows, and mist-shrouded blue peaks got me wanting for more. The biggest shock and delight was its utter isolation and it was hard to believe that in 2016, there existed a beach, a mountain, a stream, an island on earth, which most of the time, belonged solely to me. The isolation, however, came at a price, and the biggest challenge I faced on the Socotra island was to fight through the shroud of carefully cultivated lack of information about the island and the horrible tourism monopoly which exists there. During my trip, I had to unravel too many disheartening “Why’s, Where’s and How’s” and Socotra at times, pushed my endurance limit to the fullest.

From sleeping in caves, calling a car home for days, going without a shower, proper food, battling harsh conditions, lack of hygiene, etc, my Socotra island stay tough on the body and easy on the soul. Nothing felt more gut-wrenching than to navigate through the litter choked lanes of its main town of Hadibo and it was equally heavenly to explore Socotra’s gold drenched sunsets, sugar-white beaches, and soft aquamarine water. While the island’s ugly mercenary system of haggling wore me down, I used to regain my life energy by simply hugging the timeless gnarly branches of blood dragon trees. Never before had nature touched me so deeply and I had never so happily detached than in Socotra. Nothing feels better than touching your dream or see it come true and touching or hugging the island’s blood dragon trees always uplifted my soul. There was something about them as they stood on the ancient mysterious cliffs, looking weathered, wise, and yet vital. At times, I spoke to them in whispers, sure that they take it in and I had a lot going on at that time. As crazy as it sounds, in retrospect, I am glad that I spent so much time being a tree-hugger on Socotra island because as a friend of mine said recently, “You do not know when the island will open up for the world again”.

The island with just one road.