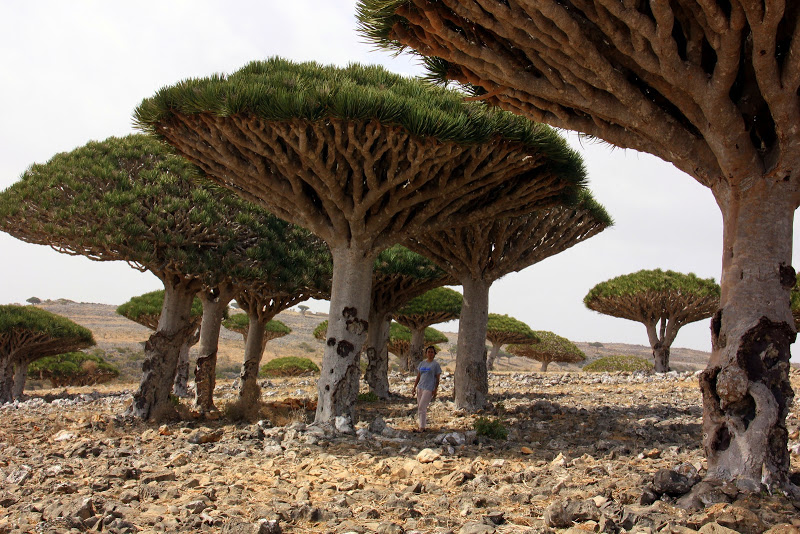 Memories of Socotra, one of the remotest travel destinations in the world

“It is not down in any map, True places never are” – Herman Melville. This is completely applicable to Socotra Island. It is one of the most fascinating destinations I have ever traveled to as a professional travel blogger. To say, that it is incredible, is like downplaying its beauty and the island is truly one of the last rarely discovered places on earth. Intriguingly isolated at nearly 220 miles from mainland Yemen, the country to which it belongs, Socotra is home to legends, history, strange plants, and some of the most beautiful beaches in the world. Any mention of this hot, harsh windswept island without fail draws two reactions and they are invariably either “Where is this?” or “Wow”. These reactions are well deserved for Socotra and the island is in the middle of nowhere. A UNESCO World Heritage Site, Socotra is Yemen’s largest island a very difficult to access destination.

A Bedouin woman of Socotra

The “Galapagos of the Indian Ocean”

Famous for its extraordinary and endemic flora and fauna, legends claim that Socotra had once been a habitat of dragons and the Phoenix. Titled as the ‘Galapagos of the Indian Ocean’, Socotra’s mushroom-shaped blood dragon trees have put this tiny obscure island on the map of adventurers across the world, and time had truly stopped there. It is a kind of a place, where many residents still live in caves, you can call endless stretches of pristine beaches as your own and strong winds shut out the island from the world for many months. The island which is home to approximately 50,000 inhabitants has more goats than people and hitch-hiking is the most common mode of transportation. Crime is unheard of at Socotra and its capital, Hadibo is the size of a small dinner plate. Only a few hotels exist at Socotra and the island got its brand new airport a few years back.

You may also like: YEMEN CRISIS AND MEMORIES OF OLD SANAA

The massive dunes of Arhar

The last to leave Socotra before the war

This increased Socotra’s tourism footfall to approximately 1,000 a year until the civil war of 2016 made it nearly impossible to visit any parts of Yemen. The accessibility to Socotra still remains unsure and just before the Corona pandemic, it was possible to fly to the island from Dubai. I was one of the last foreigners to visit Socotra before it was closed due to the Yemen civil war and definitely the last one to leave. At the time of my departure, the Yemen conflict was in full swing in the mainland and all the embassies had left. The international airport was closed and the bombing of Sanaa and Taiz had begun. The Indian Army evacuation flight rescued the last remaining foreigners from Yemen and as I had boarded that flight, I knew it would be a long time before I would see Socotra again.

An island with one road and more goats than humans

Today, when I look back and think about Socotra, the only word which comes to my mind is surreal. Socotra Island is indeed surreal and at the time of my visit, there was one long road trip. Incidentally, the island has only one road which goes through the length and breadth of the landform, and public transportation is nearly nonexistent. Hitchhiking is the most common mode of transportation and apart from Hadibo (the capital), hotels/accommodations are not available throughout the island. Camping is the most popular stay option there and you have the option to sleep under the stars, in canyons, caves or in Bedouin homes. The residents of the islands (apart from the goats) are broadly divided into the coastal fishing folks and the highland Bedouins. The mountain people roam around the vast central highlands, live in stone huts or caves, and sustain mostly on their animals, plant products, and barter system. They know the misty blue mountains like the back of their hands and trekking the hidden canyons and gorges with them as guides is an unforgettable experience. My own camping expedition at the lost Wadi Dir Hul, Diksam, and the Moumi Plateaus were with one Bedouin guide and he showed me some of the most breathtaking sights I have ever come across in my life. Picture this: lost canyons with sparkling emerald rivers, date palms, rose red cliffs, and strange alien vegetation, all of which have been existing there as long as time and the surrounding mountains had been covered with mushroom-shaped dragon blood trees and flowering desert roses.

Recommended for you: SIBERIA, BOLIVIA AND IRAN ON MY INSTAGRAM

The uniqueness of Diksam Plateau

The most magical beaches in the world

My Socotra trip took me all over the island and it was a lot of driving. The landscape got drier as I neared south and huge stony mountains were pockmarked the stony cavernous caves. Those caves were fantastic and I remember driving straight into one, only to find it housing more cars, humans, goats, and complete sets of picnickers. The dry Nojid and Arhar have some very beautiful cave systems and Qalanciya is the most beautiful place I have ever seen. Surrounded by rocky mountains, which are coated with sugar-white sand dunes, Qalanciya houses Socotra’s second-largest habitat, and its snow-white stunning beach is ringed by the crystal clear turquoise water There was a shallow lagoon on the beach whose its water rose and ebbed with the tide. The locals hunted for crabs, squids, and baby sharks there. Now, imagine the play of colors as I describe Qalanciya; chocolate brown stony mountains, snow-white sand dunes, sea green lagoon, pristine dazzling beach, open sky, and an impossibly blue ocean. The description, though sounding almost paradisaical still falls short in doing justice to Qalanciya and the shifting dunes of Zahak are equally gorgeous.

Suggested for you: BOLIVIA IN PHOTOS

The beautiful lagoon of Qalanciya

Memories of a lagoon in Socotra

The Moumi Plateau, Delisha, and Arhar beaches which had been located on the other side of the island are enchanting too and the central highland loomed over them like a mighty king. All these places formed my multi-day Socotra itinerary and I am perhaps the only Indian travel blogger and one of the handful solo woman travelers who have visited the unique place. This fact itself gives a lot of pride and pleasure to me because despite its beauty Socotra was not an easy destination. The difficulty of access is a cakewalk in comparison to surviving there and the harsh wind sun swept island seemed like a venue out of a reality tv show. Because of lack of proper amenities, sleeping in caves, cars, on the beach, and in canyons became a part of my Socotra routine and my most luxurious accommodation was a beach shack at Qalanciya. Food too was mostly camping grub and I had relied on the locals’ generosity for better meals. Showers and toilets constituted of going to lagoons, rock pools, and small rivers and baby wipes became the last resort to stay clean.

Qalanciya lagoon when the tide ebbs

This is one of the remotest destinations on earth

By the time, Socotra was done with me, I looked like a ragamuffin, smelled and dressed unladylike and the terrible civil war in the mainland kept me marooned at the island until the arrival of the rescue plane. All these combined with a serious bout of malaria made me return home skinny and sick. For a long time, I was afraid to travel, was in shock of the war, yet every time depression pulled me down, the stunning memories of Socotra made me feel very blessed and awed. The fact that so much of beauty and simplicity can exist in a place on earth in the 21st century is enough to make one astonished and then there is the remoteness of it all. After my return from war-torn Yemen, I took a long break to contemplate and evaluate my life situation, and thus the rest of 2016 was all about radical changes. Such are my Socotra Island memories in a nutshell and today if I had to do it all over again, I would jump at the first opportunity. There’s a saying, “Be brave, Take risks, Nothing can substitute the experience” because in the end we only regret chances that we didn’t take. In this photo series, I will take you to Socotra, a magical island of incomparable beauty and one of the remotest travel destinations on earth.

Socotra is a destination in the middle of nowhere.

No other place on earth.

It is one of the most

For more photos of this incredible place