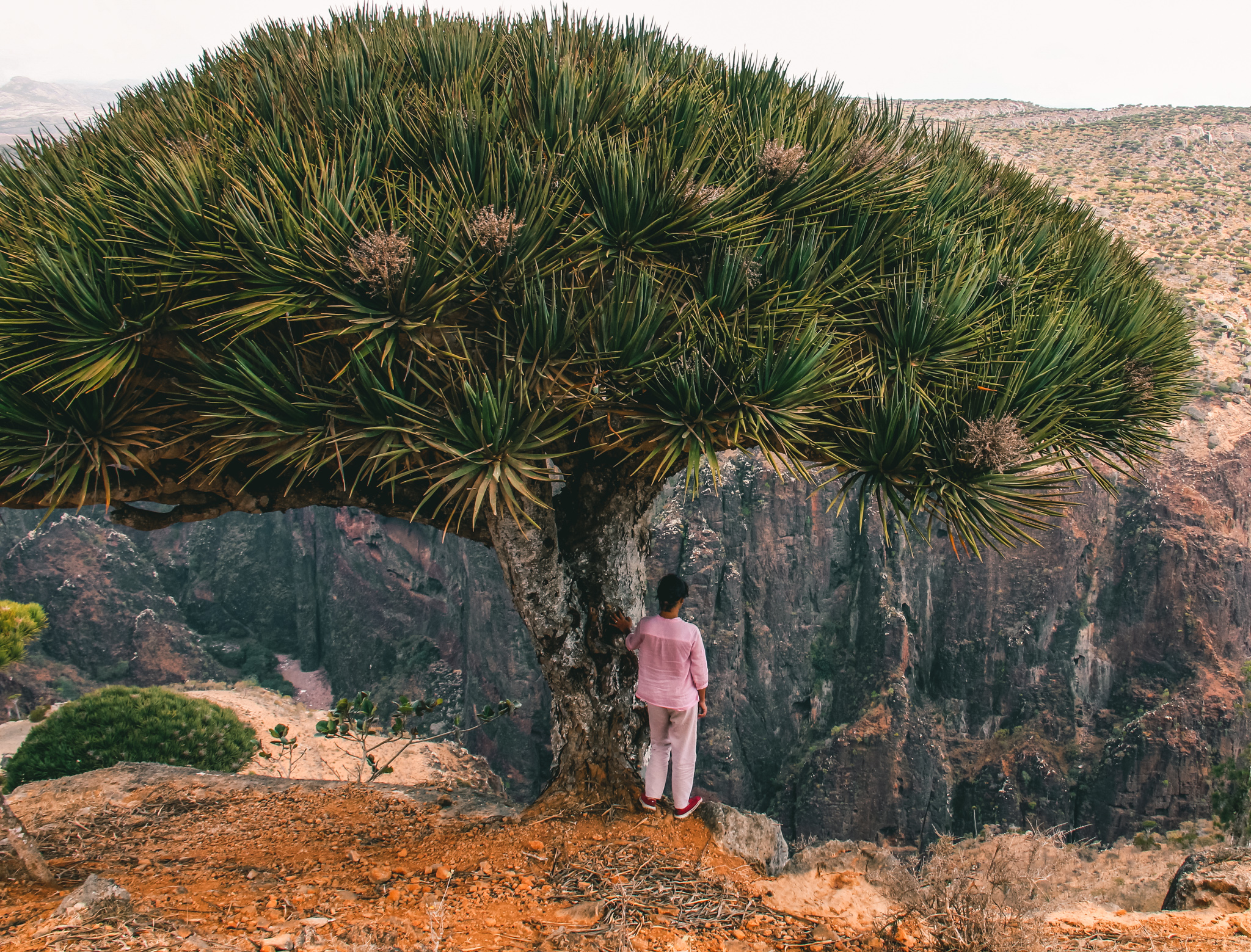 Diksam Plateau was the reason why I visited the remote island of Socotra. It was home to the endemic blood dragon trees, frankincense, and myrrh. I have always been fascinated with pretty words and frankincense had a nice ring to it. An aromatic resin used in making incense and perfumes, frankincense was one of the three precious items gifted to baby Jesus by the Three Wise Men. With such an invaluable legacy and a pretty sounding name, the aromatic Olibanum (scientific name of frankincense), made me look forward to visiting Diksam Plateau. Located in the central part of Socotra island, Diksam is a national park and it is abundant with rare flora and fauna. It was my 2nd day in Socotra and I was raring to explore more of one of the world’s most unique islands.

The drive to Diksam Plateau

Anwar, my guide arrived at dawn in his faithful car to pick me up from the Taj Socotra hotel. The car was to be my home and mode of transport for the next seven days and I was relieved to find it a sturdy, comfortable 4*4. Socotra’s only road was modestly busy that morning and we passed a few similar vehicles, motorcycles, and a battered public van. The van was filled to its gills and curious Socotri eyes stared at us as we passed by. Public transportation is one of Socotra’s biggest banes and during the last leg of my trip, I personally waited for one for five hours by the highway. That morning, however, my excitement was still fresh and I looked forward to Diksam with a fresh-faced eagerness. Falling silvery morning light created magic and I stared in awe at the island’s vast, untouched beauty.

Blue jagged central highlands loomed pleasantly close and the undulating flat plains unfurled at the bottom like grand robes of a king. Date plantations stood unstirring and the ancient stone villages made no noise. Time seemed to have bypassed the island completely and life hung there with the same expectancy as it existed during the time of Queen Sheba and beyond. It had not moved past the pre-Islamic times much and the virginal beauty experienced by me was perhaps quite similar to what the ancient sailors saw when they arrived at its shores for frankincense and myrrh. Throughout centuries, most of the great civilizations of the world coveted Socotra’s riches and it’s frankincense, myrrh, and blood dragon products have been offered to the departed at countless Egyptian pharaohs’ funerals and at Greek oracle temples. Demands of those great empires sent ships full of sailors to brave its treacherous shoals, ferocious winds, and mythical dangerous snakes that guarded caves and stories of islanders being able to control natural and supernatural forces were rampant.

Heading towards the Diksam Plateau

Fortunately, I had nothing to brave that morning as we slowly drove uphill towards Diksam Plateau and a cool, morning air came at me straight from a vast blue sky. It became considerably colder up in the highlands and soon only a shadow of the vast blue ocean could be seen on the horizon. The mountainous area leveled out at the top and we stopped at one point to take in the incredible vista. It felt surreal to see huge empty space simply ending into the sea and there was no ugly human touch of modernization to mar its spotless beauty. No hotels, billboards, or any such signs of commercialization hindered the flow of natural space and the whole scene was clean, virginal, and godly. Its beauty was wholesome and pure, just as nature should be when left untampered and hints of spring painted the landscape with multi-coloured blooms. Diksam Plateau was dotted with flowers and they created bright spots of colour in the otherwise harsh, stony environment.

This island seems to be frozen in time

Few bejeweled colours and hennaed hands peeped among the blooms and they belonged to the Bedouin tribes or the mountain people. The Bedouin were semi-nomadic pastoralists who lived in the interior highlands of Socotra and they herded sheep and goats for a living. While a few Bedouin villages had permanent houses, most still lived in caves for several months of the year and roamed the highlands and its vales like timeless shadows. Their lives remained unchanged for centuries and being spring, the Diksam Plateau was dotted with Bedouin herders ambling behind their scraggly groups. The men were stoic in their sarong like “foutah” lungi skirt, but it was their women who drew my attention. Dressed in traditional long, black gown and brilliantly coloured headscarves, the Bedouin ladies spotted me from a distance and came rushing up to our car. Dark flashing eyes stared at my unfamiliar ‘Hind” face as they peddled goat hair rope, blood dragon tree makeup, and wild honey and I immediately got bombarded with Bollywood related questions in their rare Socotri language.

Ever seen Bollywood movies dubbed in the rarest language?

Never before had I been questioned about Bollywood (one of the most peddled global commodities) in one of the world’s rarest languages and the irony of the situation left me speechless. While their children spent most time of their days’ herding goats and roaming the highland’s granite precipices, their rustic patched up homes in the Diksam Plateau proudly displayed big satellite TV antennas that dished out their daily dose of Bollywood from another part of the world. Although my knowledge of Bollywood was limited, a bit rusty, my answers satisfied them enough to present me with blood dragon makeup and a bottle of fresh goat milk, and Anwar (my translator, driver, guide) and I stared in awe at the power of India’s iconic industry.

Socotra island is called the Galapagos of the Indian Ocean

The uniqueness of Socotra lies in its DNA

Socotra was all about rarity and this uniqueness touched every bit of its existence. While its flora and fauna are most highlighted, Socotri language and genealogy are pretty unique too. The Semitic language of the Islamic island of Socotra has no written form and it’s history too can be found only in Socotri poetry recited down through generations. The island is a human genealogical melting pot, and just like its iconic flora, many Socotrans have DNA patterns that are found nowhere else on earth. While it was Socotra’s uniqueness which drew me to the island, nothing prepared me for its magical, nearly Dalisque existence.

A lonely Bedouin woman of Socotra

The feeling of being on another planet

I stared at the huge sun-dappled open space, ancient flower carpeted crevices, and granite jagged rock faces in overwhelmed silence. It was like an alien environment from some other planet where there were no other humans apart from Anwar, my guide, and me. Only the sky remained faithfully familiar and it was of the freshest shade of aquamarine blue. Deep in the highlands, the sea was no longer visible and being an ocean person, I felt wistful for it. Rolling, vivacious, and known, the sea seemed like my only touch with the real world and without its comforting presence, I felt as lost as Alice in Wonderland. Such were my overwhelming thoughts, when the first blood dragon tree of Diksam Plateau could be seen in the distance and it was all that I needed to feel like the luckiest person on earth. Proud, solitary, and magnificent in its unique mushroom-shaped strangeness, the tree embodied one of my biggest dreams and hopping out of my car, I ran all the way to just feel its rare existence. Humans, they say, try to preserve their biggest treasures for future generations and that tree made me behave in the most nature-loving, hippie way ever. I cradled the broad trunk, kissed its smooth satiny bark, and had somehow wanted to channelize my life force into it. A millennium-old survivor, the blood dragon tree is sadly on the brink of extinction and the alarming lack of seedlings or young trees at the Diksam Plateau, makes conservationists fear its complete wipeout by the end of this century.

That day, however, it stood at the edge of a precipice at Diksam Plateau; like a proud old warrior, overlooking the drop of the vast empire of plains below and I tried to catch pieces of blue sky through its net of gnarly branches. The indigenous and endemic Socotra tree, which is officially known as Dracaena cinnabari, was prized throughout centuries for its blood-red sap and it is still used as paint, varnish, and dye. Growing mostly on highlands, the blood dragon trees rely on moisture which is found in the mist, and their upturned full-blown umbrella-like branches always point towards heaven, with the hope of catching their next breath of life.
Out of 6.916 billion people on earth, only a few thousands dream of Socotra and every year only paltry hundreds get to make it come true. That beautiful bright morning, apart from me, no other outsider was there on the broad flower-filled expanses of the Diksam Plateau; no foreign footsteps trod under the distant blood dragon tree forests and the hazy Bedouin silhouettes remained blissfully free of visitor’s intrusion. Now if that is not a travel blessing to count upon, I don’t know what is.

The uniqueness of Diksam Plateau