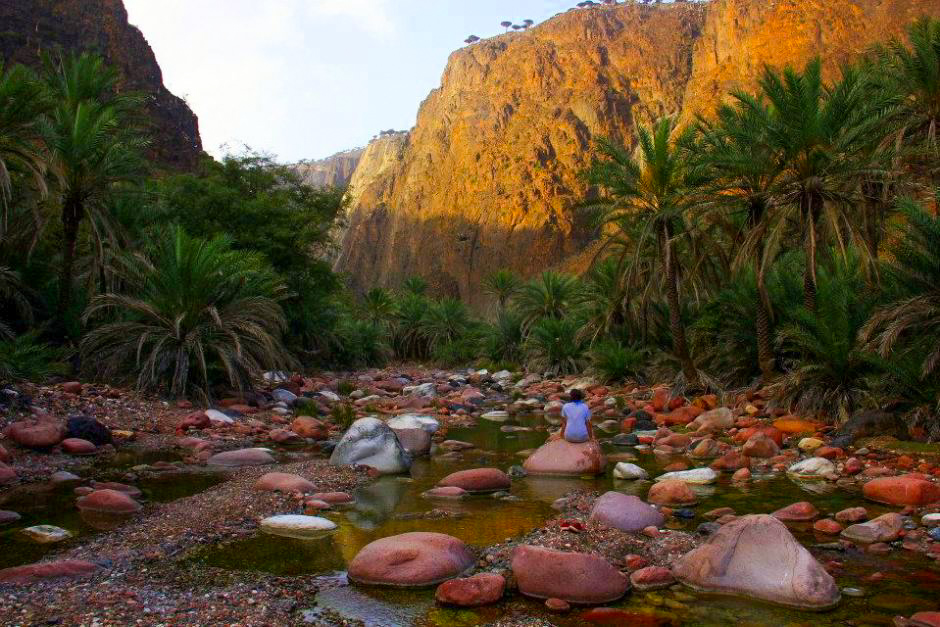 Losing time in Wadi Dirhur: being all alone in a canyon

Wadi Dirhur was a strange-looking peaceful place. We reached there by driving along Socotra’s only road through the Diksam Plateau and it was wonderfully empty drive. Diksam Plateau looked out of this world and apart from alien-looking plants, no signs of life were visible for miles. I had never before experienced a place so isolated and to my imaginative mind, it seemed like a post-nuclear aftermath world. The craggy granite mountains stretched in rows as far as eyes could see and amidst their deep folds and grooves stood bristly the shadows of the blood dragon trees. For some reason, these grand trees nearly always seemed to stand apart from the crowd. At some spots, though they grew like scrubby forests and created funny circular shadows on the rough rose coloured gravel at their feet.

The hidden valley of Wadi Dirhur

Hardly any Bedouin villages could be seen at the Diksam Plateau and the blazing sun made the shepherds rest in cool flowery shades. At one point, a dirt track bifurcated away from the road, and Anwar drove headlong on it until he stopped at a precipice. Gorgeous Wadi Dirhur spread below like a mirage and from our bird’s eye viewpoint, it looked like a hidden world. A lovely slender stream ran through the valley and it sparkled like jewels in the bright afternoon heat. A short, steep downhill drive took us to the canyon and the world seemed more and more unfamiliar as we went downhill. Dry, harsh land peeped underneath white ghostly Cucumber Trees and potbellied Desert Roses bloomed like grotesque pantomime dancers.

The alien-looking trees of Socotra

Apart from being an alien-looking place, Socotra is also a terribly harsh environment to survive. The island is sunburnt and windswept and drought-like dry conditions pervade all areas. Some areas are particularly more arid than the rest and the island’s flora has adapted to its conditions in the most unique ways. When Sting had sung the sultry notes of the song “Desert Rose”, I am sure a squat, rather ugly looking tree with a swollen belly had not been on his mind and Socotra’s Adenium Obesum is as much a rose, as I am an elephant. Although these funny trees are found in some parts of the Arabian mainland and Africa, the ones in Socotra bulge larger than their African counterparts. They have wonderfully adapted themselves to Socotra’s harsh aridity and use their distorted, bloated trunks to store precious water. They supposedly do not require soil and their unique shapes are their means of anchoring on rocks, on which they grow. The desert roses bloomed earlier that year and the hard, brown monotony of the canyon was dappled with their pink blossoms.

A massive cucumber tree of Socotra

Wadi Dirhur arrived in a steep gradient and in spite of my seat belt, my back got brutally jolted during the entire ride. Dry scrub forests provided shade in the valley/wadi where apart from Anwar, I was the only human. It was completely silent and the afternoon heat stifled the breeze that blew in from the stream. The little green brook was a sheer utter delight and I scrambled into its crystal clear water for a refreshing swim. The colour of the water was emerald green and it was free from any algae, oiliness, and muck. Date palms bordered it in lush forests and smooth golden pink rocks created beautiful natural stepping stones. The canyon walls rose steeply along the shallow stream and desert rose and cucumber trees covered the slopes in profusion. Their white ghostly trunks stood out in the harsh sun and I could locate cucumbers growing under their floppy thatch of green leaves. The cool, watery garden vegetable, which is usually found dangling from vines in every other place on earth, takes a whole new shape and size in Socotra and they are as alien-looking as the desert rose.

The feeling of being alone in nature

Happily isolated and with the treasure of time on my hands, I the beauty of Wadi Dirhur to the fullest. I swam in the stream, sunned on the palm-shaded stones, and spent my time spotting different coloured crabs among the fishes in the stream. It was paradisaical and apart from Anwar, who was cooking lunch, further downstream, the gorgeous canyon was completely mine. Large yellow Egyptian vultures stared at me from their rocky nests and all-around desert rose trees bloomed in profusion. Now, I am a bit of a tree hugger and Socotra’s unique flora had made go a bit bonkers. I hugged as many rarest of the rare trees in the world as possible, knowing that I may never return there again.

One of the goats brought by the locals

And then came the happy picnickers

It was at lunch when a group of local Socotris came trudging down the slopes of Wadi Dirhur. A well-known picnic spot for the locals and visiting expat Socotrans, Wadi Dirhur in some places were scattered with hooves, horns, and discarded goat skins. Picnic is a very popular activity among the islanders and they usually include barbecuing freshly slaughtered goat meat, eating rice pulao (rice dish speckled with dry fruits and spices), drinking umpteen cups of tea and gossiping. Socotrans love gossiping and they huddle for juicy conversations at tea shops, at dinners/lunches at someone’s house, in the middle of the road, and on carpeted date palm groves on the island’s hidden wadis. The locals picnic in big groups, carry sumptuous lunch baskets (and personal chefs), and buy the festive meat from the small Bedouin villages. That was why perhaps I had spotted a few nomadic settlements in the initial part of our drive and why the Bedouins always ran up at the sight of a passing car. When I say, nomadic settlement, I mean it in the Socotran standard and that includes a maximum number of 4-5 houses/ families and maybe a couple living in caves with their 2-3 dozen goats and cows.

It is not too difficult to lose your time here

The island’s biggest attraction was its isolation and at times, I pinched myself into believing that such a place still existed on earth in 2016. By the end of the Wadi Dirhur day, we were the only humans staying at the canyon and Anwar rustled up a cook dinner before it became dark. Dinner came from an assortment of tuna cans and tomato sauce jars, and food was definitely the biggest let down of Socotra. Dusk fell fast dinner and Wadi Dirhur got engulfed in complete darkness. Stars burst open in the vast inky sky like massive diamonds and silence descended like heavy sleep. We spread out our mattresses under the broad strip of the Milky Way and the only sound of the night was of our own breathing. The entire canyon seemed strangely devoid of any nocturnal creature and no buzzing of crickets, flapping wings of bats, or hooting calls of owls broken the dark heavy silence. Time got lost there; slipped through the crevices of the canyon and wandered off in the night and that was one of most liberating sensations of my life. Being controlled by our watch, we forget how easy it is to unwind and it is only when we lose time, that the real relaxation sets in. Time has no meaning when cocooned in the dark in the midst of an empty canyon on one of the most remote places in the world, and so I slept in a timeless, deep slumber among the canyon, stars, and desert roses of Socotra.

Dusk falling in the canyon

The rare and big Egyptian vultures

This was my travel dream come true