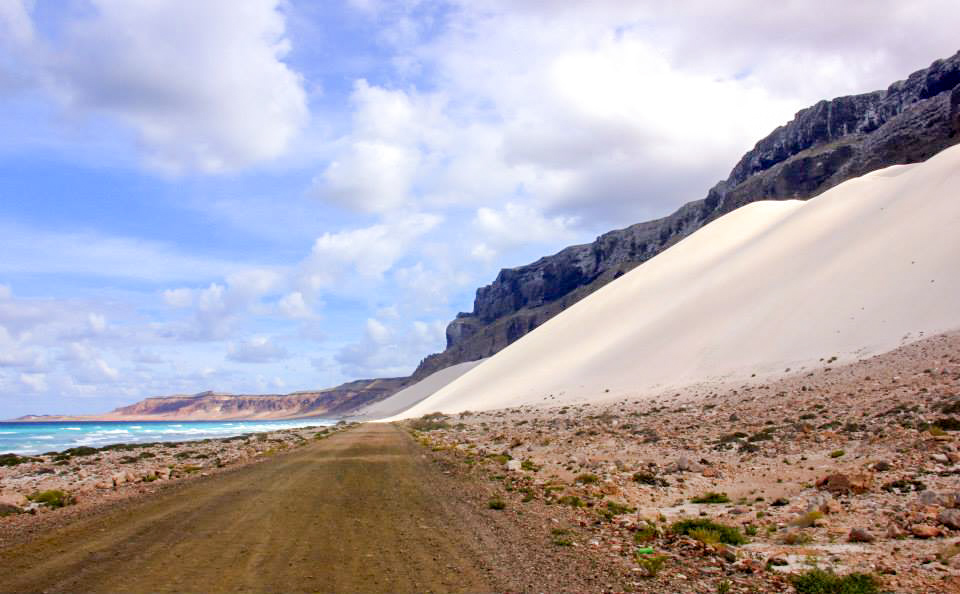 My last few days in Socotra Yemen were spent holed up in my Taj Socotra Hotel room. I alternated between feeling horribly sick and homesick. The fever, which started because of a fast spreading ear infection, got diagnosed as malaria and it took a whole bunch of weakening antibiotics to help me feel strong enough to get back home. The medicines gave me delusional thoughts and the confinement of my room nearly driven me mad. Yemen’s and global political situation started making me feel very anxious and I counted days to get back my strength to be able to return to India. Only once, Anwar took me for a drive to the beautiful Arhar Beach and as spectacular as it was, weakness made me enjoy its panorama from the comfort of the car. That enjoyment too was short lived as aching body made me crave for a bed. So we rushed back to Hadibo before the fever became too high. Ill health wrecked havoc in my travel plans and I changed my Socotra-Sanaa-Dubai-Mumbai tickets for a later date. So, technically speaking, although I stayed in Socotra Yemen longer than my original plan, I ended up doing nothing special except being violently sick, sleeping, healing, missing my family and India.

Yemeni mainland was undergoing rapid political changes during that phase and uncertainty hung like a death pall. I remember TV channels showing repeat telecasts of the small Arab country burning in discontent and my entire sick period was filled with apprehension. The Yemen government fell apart and their entire parliament along with all peripheral ministries also collapsed. Houthis officially took over and news channels showed fearsome civil riots spreading across Yemen like wildfire. News of disruption of services, peace etc trickled down to the island and embellished horrifying stories added to my woes. Socotra Yemen at that moment only had seven foreigners (including me) staying on the island and among us, four were South African missionaries, who were stationed there on duty. Every evening, they huddled in my room, to check up on the sick tourist, watch news in silent anxiety and each faced a deep fear of not being able to go back home in a long time.

The blood spilling over the world

Incidentally, at that time, extremist groups in Syria and Iraq were executing captives in the most inhuman manner and Japan and the rest of the world were vowing revenge. News of constant drone attacks at the off limits Hadramout mountains and the surrounding desert towns of Marib and Shibam were terrifying and we counted fearful days before ISIS made its presence felt in Yemen. In retrospect, those were some of my most emotionally disturbing and mentally taxing travel moments and to fall sick in a country where Al Qaeda, Houthis and armed Sunni tribes were vying for power, was a real nightmare. All these thoughts, disturbing media telecasts and an ill body made feel extremely homesick and my most evenings were spent crying myself to sleep. I remember, how images from my home, my city and the safety net of my family flashed in front of my eyes and immediately gorgeous Socotra Yemen sunsets faded into dull monochromes. A really slow internet also did not help my cause and I managed to leave messages of my safety to my family back home. Indian embassy’s glaring Travel Advisory to Yemen made things scarier and I feared my consulate leaving the country, before I got better.

To keep myself from falling into pieces, I started writing again; scribbling endlessly on pages and pouring out my thoughts through a proper fountain pen till I used to fall asleep on my open diary. Strangely the act helped in venting out and healed me, while I counted days to go back home from Socotra Yemen. I always enjoyed writing and preferred a fountain pen to electronic devices and once again the curling, wet letters soothed my mind. Today, reliving those nightmarish moments seem impossible and the pressure of the anxiety faced then, is hard to pen down. So I am attaching excerpts from my travel diary to help explain the situation in a more poignant way. The next post is taken directly from my Socotra Yemen diary during the war. Inane, insecure, frustrated, hysterical, at times borderline crazy, selfish, scared, heartbroken, anxious and lonely; solo traveler’s thoughts at the time of uncertainty are a direct giveaway on how difficult it is to be responsible for your own self, in an unfamiliar surrounding amidst situation beyond our control. The intense homesickness and frustration felt in such situations are at times too much to handle and even the simplest of things result in extreme mood swings. Falling sick and of course, being a woman adds a whole new dimension to  the entire mess and you find asking yourself, why on earth did you ever have to do this anyway.

Grassy meadows near Arhar Beach where goats come to graze

The one and only road of Socotra Yemen

The massive sand dunes of Arhar Beach of Socotra Yemen

The Arhar Beach of Socotra Yemen

Children slide down the gigantic dunes on mattresses

An old and sick solo traveler in Socotra Yemen