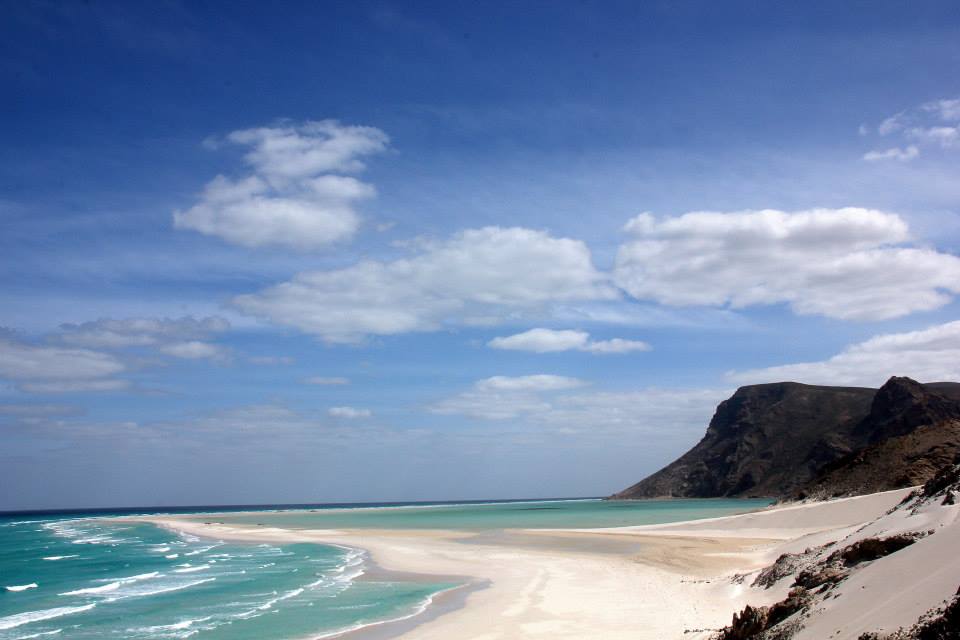 The amber hunter of Detwa Lagoon! My Qalanciya days can be broadly divided into two parts: the unbelievable beauty of the place and the unimaginable warmth of the people of the little fishing town. Although Qalanciya is officially Socotra’s second-largest town, in reality, it has about 15-20 houses, a mosque, a school, and a brand new hospital. Rocky mountains divide Qalanciya into the isolated Detwa Lagoon and the littered, humming fishing village community and the residents of the two usually did not cross over into each other’s territories. While traditional fishermen and date farmers lived in the village, the Detwa Lagoon was more of the tourist’s zone. Beach huts lined the crescent-shaped lagoon and apart from occasional gawking, villagers respected the privacy of the holidaymakers, though except for me there was no other person on the lagoon.

The beautiful colours of Detwa Lagoon

Detwa Lagoon was a gorgeous blue-green shallow lagoon that reduced and increased with tides. Craggy amber coloured mountains circled the water body. Sharp, sculpted with a beautifully glistening coat of sand, the mountains were spectacular and I could never enough of their beauty. They seemed to change colours depending on the time of the day and cloud cover made them look surreal. Several caves ringed along the sand coated mountains and they contained several interesting characters and stories. One of them was Abdullah, a friendly wiry fisherman whom I met immediately upon reaching Detwa Lagoon and till today I am conflicted whether it was his offer to cook calamari for me, his entertainingly outrageous lies or his happy, infectious smile, which made me his fan.

My basic camp at Detwa Lagoon

Beach huts of Detwa Lagoon were equipped with absolutely basic modern comforts. These were four postered thatched structures that allowed an unhindered view of the lagoon and freshest sea breeze throughout the day. There were no doors, attached bathrooms, or toilets, but at night it felt better to go to sleep without the fear of getting buried under shifting sand. Rudimentary bathrooms and toilets stood at a distance and they were concrete four walls that enclosed a squat toilet and a showerhead positioned right over the hole. An attached water tank made the unit functioning and I kept mine jealously secured with lock and key. My folding mattress consisted of my only piece of furniture and in the evening, a portable electric lantern (along with an extended electricity connection) made things comfortable. Only the kitchen posed to be a problem and the biggest irk was the dual task of flapping away thieving Egyptian Vultures while cooking. Our small camp stove was very much used at Detwa Lagoon and Anwar and I experimented with many seafood dishes there. While Anwar’s trials were positively tasty, most of mine were of questionable taste, look, and odour.

The locals look for cuttlefish when the tide goes back

When Abdullah came to the rescue

Needless to say, it was my culinary skill, rather the severe lack of it, which drew Abdullah to my beach hut. I was trying to cook the lobsters that we bought in Omak and he came rushing to save the sacrificial crustaceans with a disapproving loud “tsk tsk”. Abdullah grabbed them from my hand before I massacred their edibility for good. As expected, it was my Hind (read Bollywood) connection which made him shower me with a huge sunny smile and after that, we were fast friends. He was so enchanted by my squeaky renditions of popular Hindi songs that he sealed our friendship by cooking us big, slippery calamari which he had freshly plucked out of the lagoon. Thus begun my Qalanciya sojourn, with Abdullah, Detwa lagoon, hiking the sugary sculpted mountains every morning and at night getting lulled to sleep, without the fear of being buried alive.

Abdullah was a fantastic character. An expert storyteller, he loved fishing, hogging the limelight and regaling people with his notorious, and a bit embellished tales. According to him, he once discovered amber inside the belly of a beached whale and sold it for a fortune. With the sudden downpour of wealth, he chased women, lived the life of a high roller, drank, dined, and in general had a pretty good time. For his family, he built a concrete, comfortable house and sent his father for the annual Mecca pilgrimage to purge his sins, in his place. He bragged about his various ex-girlfriends, while cooking our lunch and how they disappeared after his fortune went bust. A dreamy smile played on his lips as he reminisced of his erstwhile days of wealth and he confirmed that they were all nice, vivacious ladies. It was around four in the evening of my first day at Detwa Lagoon when Abdullah spun his outrageous stories and I listened to him in dazed hunger.

The beach with the ebbing tide

The colourful imagination of Abdullah

Post lunch, I mentally credited his stories to vivid imagination when Anwar suggested a small hike to Abdullah’s cave. As atrocious as his stories of wealth had been, the reason behind his forced exile to the cave was even more hilarious. The little Qalanciya fisherman apparently was sentenced to spending some parts of his time in the cave after his wife lodged a civil complaint against him. The poor, overburdened woman had borne him six children, and Abdullah, who aimed at having a perfect dozen, refused to listen to her objections. In the end, the harassed, good lady sought the local village council’s help, and thus Abdullah was barred from having any more children. It was a hot Detwa lagoon afternoon when a post-lunch drowsy me and Anwar hiked up to the cave and I unwillingly dragged my heavy feet behind the two Socotra men.

A local fisherman looking for calamari in Detwa Lagoon

Reality vs Imagination of Detwa Lagoon

By then, I liked the lovable fisherman enough to not harbour any intention of finding out the truth behind his stories and a nice siesta tempted me wildly. Abdullah’s cave arrived at the mouth of the Detwa lagoon and the yawning entrance totally blew my mind. Decorated with a huge whale jaw bone and pair of massive ribs, the cave housed all the telltale remnants of his fantastic adventure and I slumped down on the turtle shell stool in open-mouthed amazement. There’s more to what meets the eyes and Abdullah of Detwa Lagoon certainly was the epitome of it.

Of the most beautiful

The most gorgeous places

I have ever seen