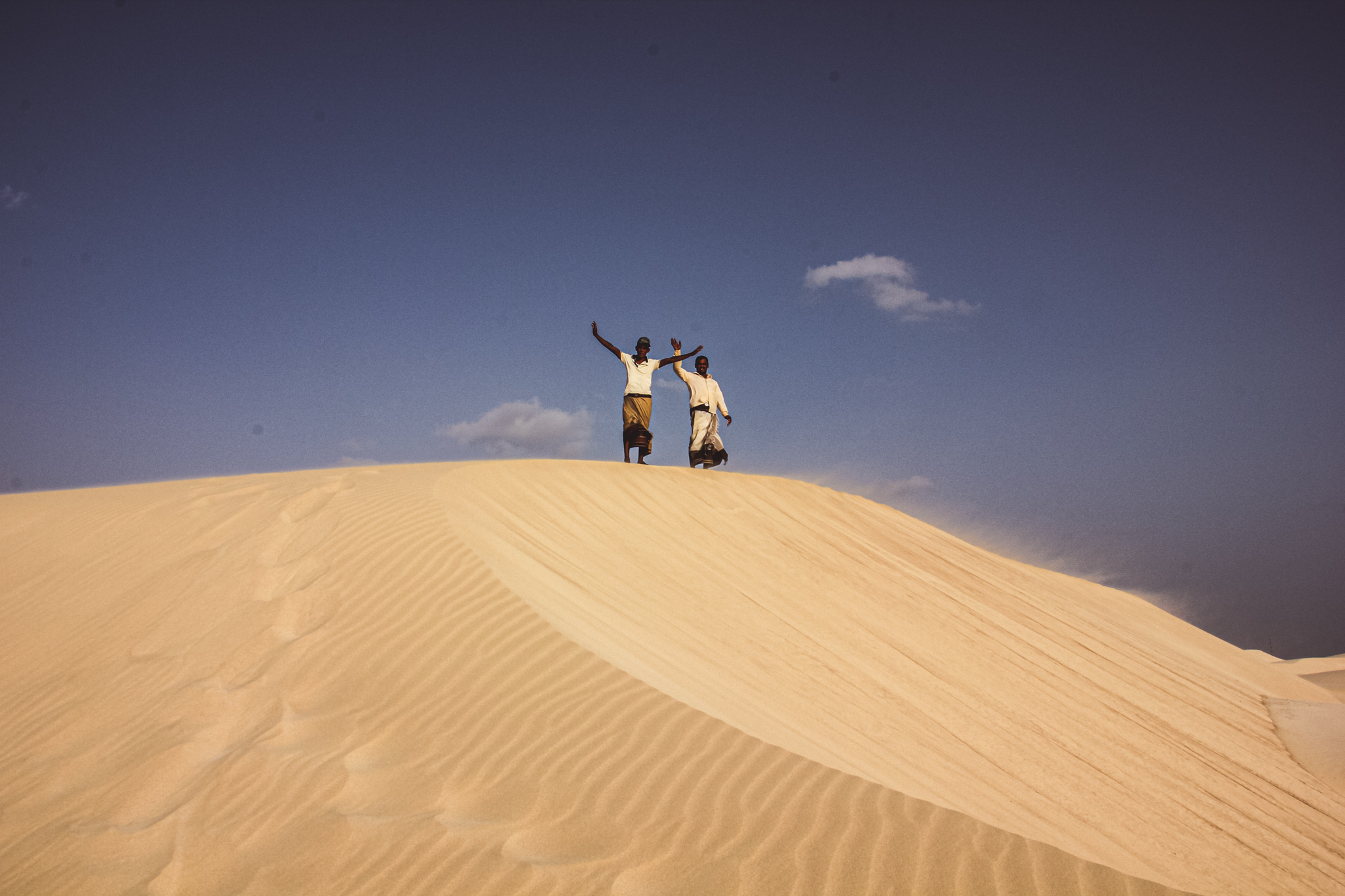 The shifting sand dunes of Zahak

Ever looked at soft undulating mounds, hills, and dunes and had the immense urge to roll down them? I love soft rolling things and every time, I look at one, I picture myself rolling down it like a child. The sand dunes of Zahak looked exactly like that and they were also dazzling white. From a distance, the Zahak sand dunes resembled endless mounds of sugar and were quite a contrast to the rest of the arid Nogid region. Soft rippled and nearly glowing in the mellowing sun, the dunes were located near Dogub cave and were a short drive away. We stopped the car right at the edge of the dunes and the sand felt like soft powder beneath my feet. Although I couldn’t see the ocean beyond the dunes, I could hear the waves and the breeze smelled strongly of salt. Anwar’s eyes lit up at the sight of the dunes and he scampered up the nearly vertical sand masses like a desert hare. With his long limbs streaking against the afternoon sun and his futa (Socotran version of sarong/lungi) fluttering in the breeze, he made it look so effortless that I jumped out of the car, to run after him.

Zahak dunes views from the top

But what looked awfully easy, was actually quite difficult and I never realized how hard it was to climb sand dunes. My every step required digging and retrieving each foot, one at a time and the soft, squishy sand of Zahak made them sink deeper with every ounce of pressure. The wind which felt nicely mild on my face at ground level blasted thousands of grains at the top of the dunes and the constant veil of fine sugary wind nearly blinded me. It was a very annoying experience one from which I had nearly escaped back to the car when Anwar came to help me up the sandy mounds. It was a very nice gesture, one that I am thankful for because the view from the top was absolutely breathtaking.

The sea starts at the end of the dunes of Zahak

The sea starts right at the end of the Zahak dunes

Soft, rolling sugary dunes stretched right till the turquoise blue ocean and the sun created beautiful shadows in midst of their sensuous grooves and cuts. The whistling wind created rippling patterns on the sand in front of our eyes and the translucent lovely ocean waves complimented them perfectly. The shifting, nearly alive Zahak sand dunes were an amazing sight, and I gawked as long as it was possible to squint against constant sand loaded wind. It became windier with each setting sunray and suddenly it started getting chilly. In Socotra, the temperature dropped quite abruptly after twilight and the sublime sunset washed the arid landscape in soft golden light.

Sand dunes shifted with the wind

The stunning shifting dunes of Zahak

In the not so far distance, amber coloured stark mountains looked down upon orange plains, and the few newly constructed houses looked awfully lonesome on the vast arid land. Herds of camels stirred among the solitude and in the evening sun, the thorny foothill forests mingled into one continuous violet patch. It was a very pretty sight and we planned to camp there for the night. Our original plan was to camp on the nearby Omak Beach for the night and being road-weary, I looked forward to resting for a while. Omak promised to be very beautiful and quiet with gentle, swimmable waves and I badly wanted to get away from the whipping sands of Zahak.

Dates, goat, and fish diet of the island

With the abrasive sand constantly blasting on my face, I rushed back to the car and needless to say, dragged Anwar too. Thus, it was a very glum Socotra man who had reluctantly driven out from amongst the sugary sand dunes of Zahak and he raced past the deepening date plantations in moody silence. Socotra is famous for sinfully sweet and small pitted dates and every July is the harvest season on the island. In Socotra, seasons herald changes in lifestyles and during each monsoon, since time eternal, the island remains closed to the world. Harsh winds cause the closure of the island and during those months, the islanders depend solely on dates and other local products for food. Sources of livelihood on the harsh sun swept island are pretty limited and till today the residents like to stick to ancestral traditions, which have been handed down through generations.

Socotra is an island of a sustainable ancient lifestyle

The ancient sustainable lifestyle of Socotra

The ancient Socotrans throughout ages have developed a complex and intricate knowledge of natural medicine, sustenance, and conservation using the locally available products and for an island, so unique and endemic, continuing those traditions make sense. Thus Socotra traditional medicines use many interesting land ingredients like honey, herbs, dates, snails, head lice, etc, while from the sea, they derive dolphin fat, shark liver oil, and dried shark meat. Fishing, date palm plantations, wild beekeeping, animal husbandry, and primitive kitchen gardens constitute of their livelihood sources and in some hilly villages, people still store water and sour milk in animal skin bags. Donkeys and camels continue to bear both goods and humans and life in Socotra revolve around such precious, yet scanty materialistic possessions. Thus it was no surprise that every stone house in Socotra had a few fiercely protected date trees and fishermen walking along the coastal highway, peddling fresh catch of the sea was a common sight. That day, however, the only items being peddled on the Zahak highway were little fuzzy goats and although they were laughably cheap, I did not have the heart to buy one for food. Thus our dinner that night was once again very basic and it reminded me once again that Socotra is a place suited only for adventure lovers.

I love the sensuous curves of sand dunes

Zahak sand dunes changed colour with the time of the day

These dunes shift with the wind

The dunes shift and build

Up every single day