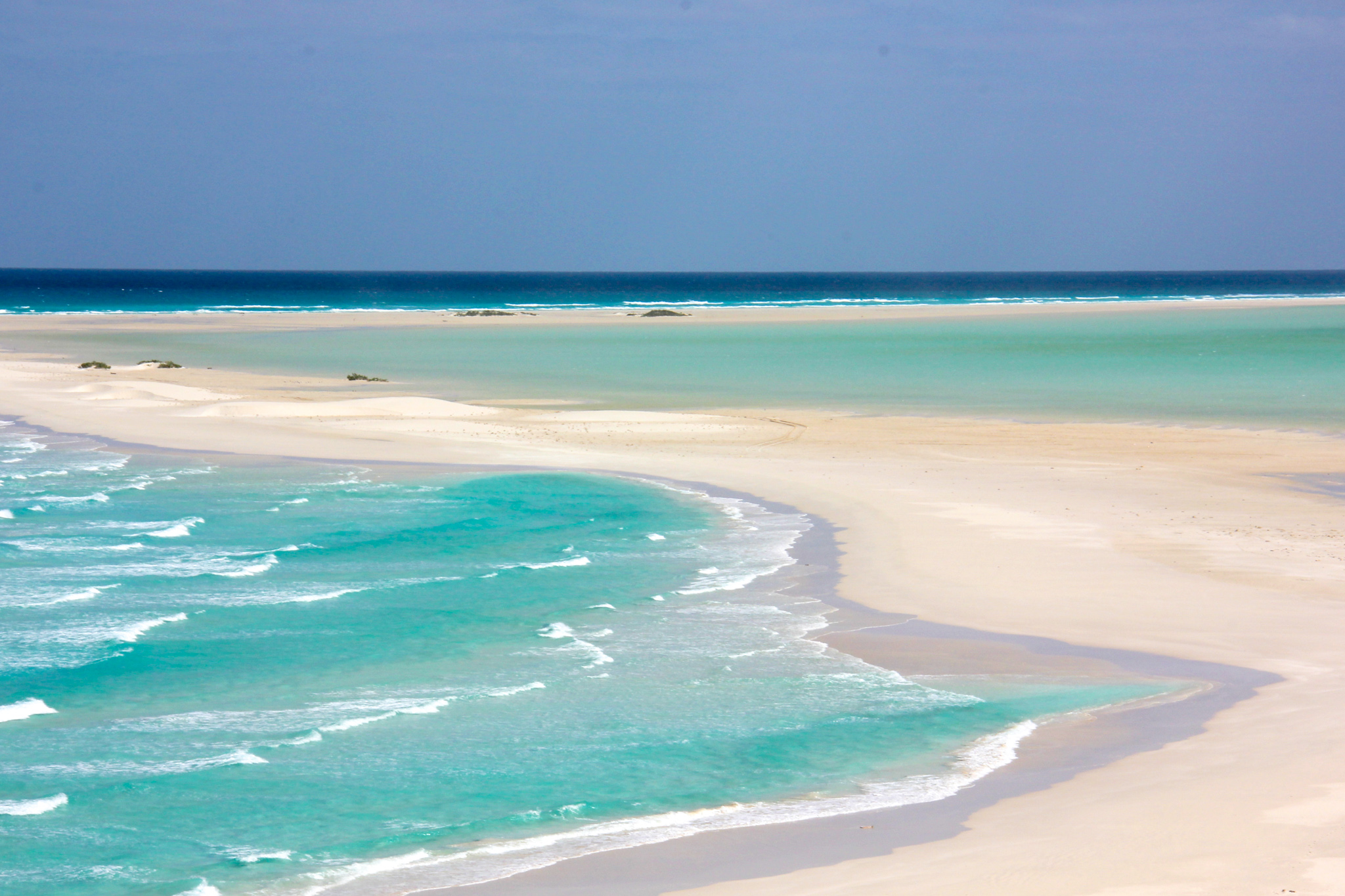 We left Omak in a cloud of dust, bumped over the edgy road, and rattled our bones towards Qadama till they felt brittle. Nogid was having a blazing hot day and I wanted to escape the heat before it became unbearable. Our next stop was Qalanciya, which was on the opposite end of the island. Located in northwest Socotra, Qalanciya was more than three hours drive and it was also the island’s second-largest town. It was famous for having one of the most spectacular beaches and after my bland Omak experience, I was excited about exploring another part of the island. The road retraced a part of our initial journey all the way near Hadibo and once again, I gaped at Socotra’s central highland’s captivating beauty. It was a sunny, windy day and the lonely, vast valleys and canyons were deathly still. No goats rushed in front of our car, no Bedouin lady stood out to peddle goat hair ropes and the valley’s wildflower petals tugged out by the wind, floated in the air like handfuls of mad butterflies. Stone houses, devoid of any life movements stood like remnants of abandoned human habitats and frankincense trees perched on stony cliffs. One of the three precious Gifts of Magi, frankincense can be traced back to pre Biblical times.

The straight road to Qalanciya

In Socotra, although the frankincense trees are found in lush abundance around the Homhil Plateau, we passed a few stray ones on our way to Qalanciya. To help me enjoy its perfume to the fullest, Anwar lit a small twig inside the car, and immediately a softest, heady aroma engulfed us like a cloud. After leaving the arid rocky reds of Nogid, we drove non stop until Qadama appeared. The desolate area arrived immediately upon descending from Diksam and it was a pit stop between Hadibo, the main town, and nearly every other part of Socotra. Qadama features a long coastline, stunning, desolate plains, shadowy mountains, and one of the island’s only two gas stations. A few lagoons lay scattered along the way and the island’s camels, goats, and humans showed up here and there. Salt production workers looked busy loading blocks of sea salt on their battered old trucks while fishermen cast their nets in the lagoons. Blue-green in colour, the lagoons were filled with catfishes, barnacles, and big red crabs. Small fishing villages dotted the beach and colourful boats bobbed on deep blue water.

The sight was a sharp contrast with Nogid’s emptiness and Qadama’s afternoon showed the signs of human activity. The sun was at its peak, by the time we passed through Qadama and sometime around three, Qalanciya appeared. It is Socotra’s 2nd largest town and needless to say, heavily littered. Apart from a brand new hospital, Qalanciya seemed like a smaller, dirtier version of Hadibo. Stone houses stood in rows on dusty unpaved lanes and a brand new village mosque featured on the main square. Date plantations circled the houses of the wealthier like gardens and rubbish heaps drew the Egyptian vultures. We passed through Socotra without stopping and speeded dangerously until Anwar screeched the car to a halt. Urging me to get out, he stared into the distance holding his expansive arms in a dramatic pose and pointed out with a silent smug smile, the absolutely stunning Detwa Lagoon beach of Qalanciya. White, translucent blue and completely empty, it was breathtaking and I was to camp there on a beach hut for a few days.

My Qalanciya days can be broadly divided into two parts: the unbelievable beauty of the place and the unimaginable warmth of the people of the little fishing town. Although Qalanciya is officially Socotra’s second-largest town, in reality, it had in 2016, about 15-20 houses, a mosque, a school, and a brand new hospital. Rocky mountains divided Qalanciya into the isolated Detwa Lagoon and the littered, humming fishing village community and the residents of the two usually did not cross over into each other’s territories. While traditional fishermen and date farmers lived in the village, the Detwa Lagoon was more of the tourist’s zone. Beach huts lined the crescent-shaped lagoon and apart from occasional gawking, villagers always respected the privacy of the holidaymakers.

Detwa was a gorgeous blue-green shallow lagoon which reduced and increased with tides and craggy amber coloured mountains circled the water body. Sharp, sculpted with a beautiful glistening coat of sand, the mountains were simply spectacular. They seemed to change colours depending on the time of the day and cloud cover made them look like something out of the world. Several caves ringed along the circular sugary mountains and these housed several interesting characters and stories. One of them was Abdullah, a friendly wiry fisherman whom I met immediately upon reaching Qalanciya and till today I am conflicted whether it was his offer to cook calamari for me, his outrageously entertaining lies, or his happy, infectious smile, that made me his fan.

We left the arid Nogid in the morning.

The long straight road to Qalanciya

Was mostly empty of traffic.

Qadama was one vast empty space.

Came and went in a flash.

Qadama stretched along the long coastline

Where lagoons held crabs and cuttlefish,

beside the lagoons and date plantations,

This was my first view of Detwa Lagoon.