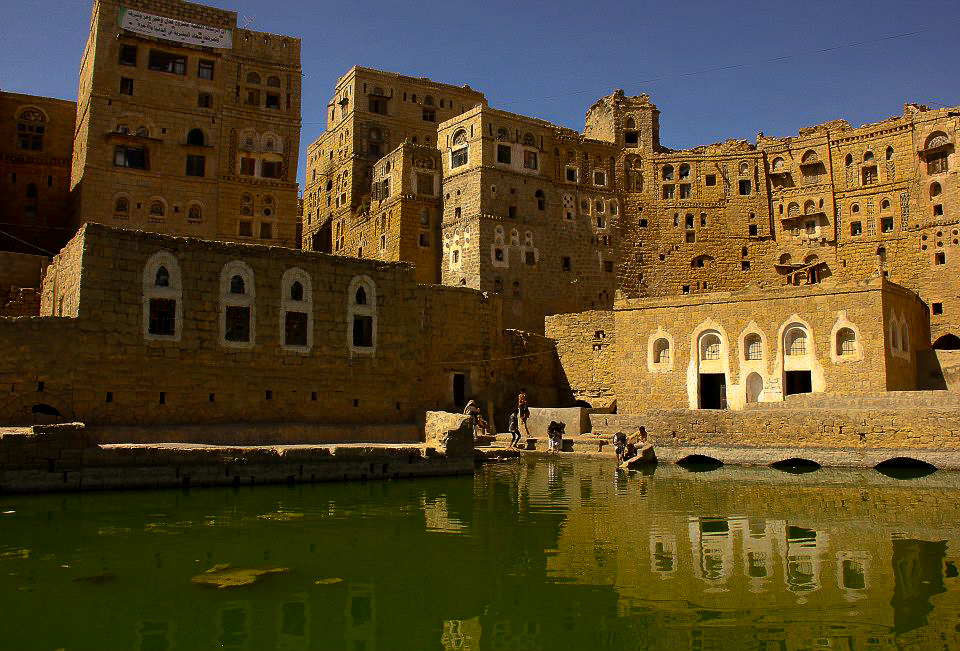 Green water of Hababa and glimpses of Yemeni Jewish past

The most essential commodity in a semi arid region is water and that was what made Hababa so special. It was a short drive away from Thula and Hababa was a brief stopover before returning to Sanaa. An old historic village, Hababa was both spectacular and heartbreaking. The architecture was quintessentially Yemeni with old stone and adobe houses, broken cobbled lanes, magnificent rammed earth skyscrapers and beautiful qamariyas (traditional stained glass windows). It was substantially smaller than Thula and the only highlight of Hababa was its beautiful still emerald green cistern.

The beautiful drive to Hababa

A short drive to Hababa

It was late noon, by the time we reached Hababa and the sun was lowering in the sky. A balmy spring breeze floated over the ancient plateaus and hills and a soft blue sky spanned overhead. Yemeni spring evenings had a strange way of turning violet during sunsets and the warm gold of the highlands were already tinged to light pink. Apricots trees bloomed riotously all along the nearly deserted road and clouds cast shadows over the ancient land. In spite of all the loveliness, a staggering amount of trash choked the countryside and multi coloured plastics strung from thorny branches of scrub bushes. A total emptiness encompassed the whole region and Hababa arrived without any fanfare.

The fortified Hababa circle the pool

A fortified village with a natural pool

A broken dirt track lead to the entrance of the village and its much famed old water cistern was located right there. The first thing that struck me about Hababa, was its antiquity and the ancient little village nearly resembled a ghost town. Even the sparkling green water seemed mirror still and only the plaintive prayer call emanating from the village mosque gave any sign of life. As if on cue, a handful of villagers came to the cistern for ablution and the calm mirror like reflection of the surrounding houses rippled with life. The old houses of Hababa were beautiful and comfortingly familiar with their stained glass windows and white embossed window decorations. Veiled ladies huddled at another corner of the pool and their colourful shawls clashed beautifully with the sparkling molten green.

Glimpses of the Yemeni Jewish past

Hababa’s highlighted cistern was indeed lovely and it was a watering hole for the domesticated animals of the town. The pool got its incredible colour from a thick bed of weeds and it was a nice spot to sit there and shoot some breeze. A pretty medieval fortress village, Hababa was a quaint little discovery and its dark, cool lanes held remnants of Yemen’s Jewish past. The qamariyas or the stained glass windows prominently boasted of the Jewish star and here and there Hebrew scripts looked visible. It was an amazing sight to see leftovers of Yemen’s Semitic history and I marveled at their existence in the heart of a country which was fighting over Islamic sects.

Hababa is a neglected village

The dismal sight of neglected heritage

Hababa’s charms sadly ended there and after the initial loveliness of the oval shaped pool, the entire village was a very dismal sight. Hababa’s lanes were unpaved, muddy with protruding naked metal pipes and trash crunched and heaved underneath our feet. Most of its old buildings were abandoned and the medieval arches were crumbling down. Small animal coops stank of rotting waste and only beautiful coloured doors stood out in midst of all the filth. It was most shocking and sneak peeks into village homes showed glimpses of dire poverty. The crumbling old buildings with decorative qamariyas and rainbow windows were nearly skeletons from inside and tiny, dark rooms contained meager belongings of the residents. A few pots, piles of clothes, bundles of firewood and shaggy goats were heaped inside the dank rooms and heavy wooden framework beams stuck out in odd angles.

Hababa is a forgotten Yemeni heritage

The bittersweet visit to Hababa

Needless to say, it was neither a very pleasant nor a pretty walk. Only the vanishing traces of colourful chadors of rural Yemeni ladies down the narrow sunlit lanes of Hababa remain embedded in my memory and I was glad to leave the dilapidated village. Hababa was the perfect example of neglected heritage and the village personified despair in the most poignant manner. With no hustling shopkeepers, hotels or even restaurants, Hababa had the potential of being a very refreshing break, yet the reality was quite the opposite. Although my visit at Hababa was very brief, strangely its memories are some of the most sharpest ones from my whole Yemen stay. I don’t know if it had been Hababa’s forlorn despair, the sheer amount of neglect of a glorious heritage or the shock of coming face to face with Yemen’s poverty for the first time, but the memories of the reflecting green waters of Hababa simply refuse to fade.

A sight of one of the ancient stone villages in Yemen.

These kinds of sights are

Common on the way

As the ablution pool

For the local villagers.

Hababa was not one of my