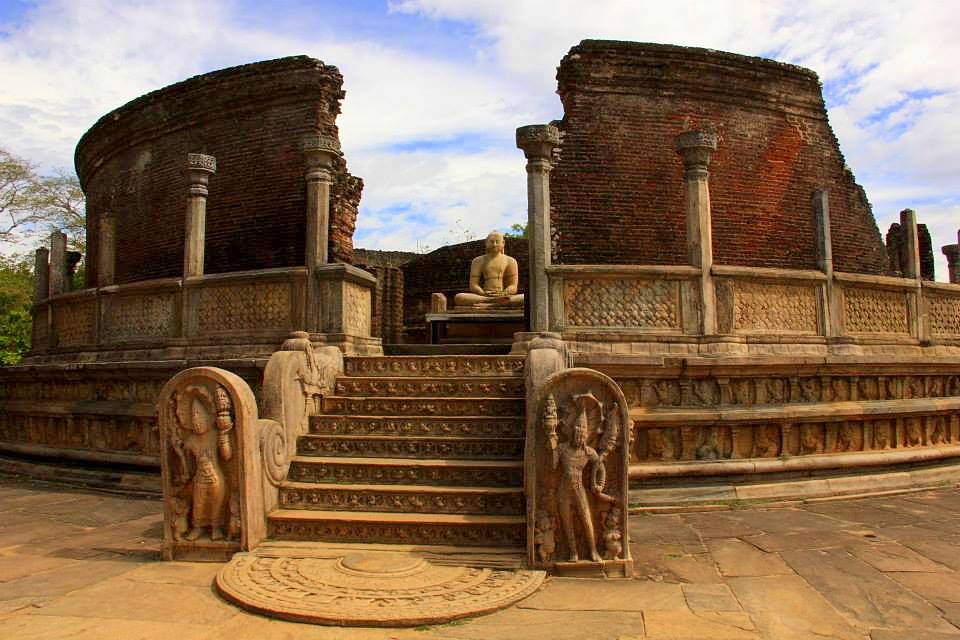 The heritage site of Polonnaruwa

The ruins of Polonnaruwa are impressive. They reminded me of a bit of Angkor Wat due to their wild appeal. The drive from Dambulla to Polonnaruwa took around 1.5 hours and the entire trip scented of green sap. Polonnaruwa is located close to wild animals packed national parks of Minneriya and Kaudulla and I found this unique combination of archaeology with the jungle to be very exhilarating. Throughout the Cultural Triangle (Sigiriya-Dambulla-Polonnaruwa) drive, one passes through the flat central plains of Sri Lanka, where vast billowing clouds and herds of wild elephants are a common sight. These national parks add a pleasant charm that makes many visitors decide to stay a day or two in Polonnaruwa and the touristy town is well-equipped to cater to international travelers. The nearby Kaduruwela (around 4km east of Polonnaruwa) contains all the banks, shops, and other facilities, while the huge, beautiful tank near the city offers a relaxing ambiance.

The rise of Polonnaruwa

Located in the flat central plains of Sri Lanka, the grand city of Polonnaruwa thrived as an important religious and commercial hub. It was the seat of powerful rulers more than 800 years ago. The beautiful ruins of today are still capable of giving glimpses of how magnificent the city had been in its heydays. Polonnaruwa archaeological park is filled with stupas, statues, ruins of tombs, tanks, and temples. The city enjoyed its golden age in the twelfth century and it represented one of the highest benchmarks of early Sinhalese civilization. Polonnaruwa was established by Vijayabahu after his successful repulsion of the South Indian Chola kings. He and his successors painstakingly not only beautified it but they also managed to transform it into one of the great urban centers of South Asia. Their grand development project, however, nearly made the state bankrupt and waves of invasions from southern India doomed the fate of Polonnaruwa within a century of its establishment.

Remnants of the royal palace at Polonnaruwa

How the mighty Polonnaruwa fell

Polonnaruwa slipped through the passage of time, was abandoned and eventually was reclaimed by nature where it remained hidden for nearly seven centuries. The ancient city was rediscovered sometime in the mid-twentieth century and extensive restoration has revived Polonnaruwa’s beauty to the fullest. It was originally enclosed by three rings of walls and within them were parks and gardens. A royal palace complex stood in the heart of the city and in the north of the city, lay the most important religious buildings. This cluster is popularly known as the Quadrangle and it contains some of the finest monumental remains in Sri Lanka. To the west of the city lies an artificial lake created by one of Polonnaruwa’s kings and it supplied water for irrigation, urban demands, and also provided a defense. Polonnaruwa’s largest monuments are in the north and it includes the buildings of the Menik Vihara, Rankot Vihara, Alahana Pirivena and Jetavana monasteries, including the famous Buddha statues of the Gal Vihara and the soaring Lankatilaka shrine.

Despite its generous scattering of shrines, statues, and temples, Polonnaruwa does not have much religious significance. However, it is advisable to not show your back to the Buddha statues or walk over the stupas with shoes.

How to reach Polonnaruwa

The best way to get around Polonnaruwa

How much time do you need

What to see in Polonnaruwa

Follow the rest of the Sri Lanka series here