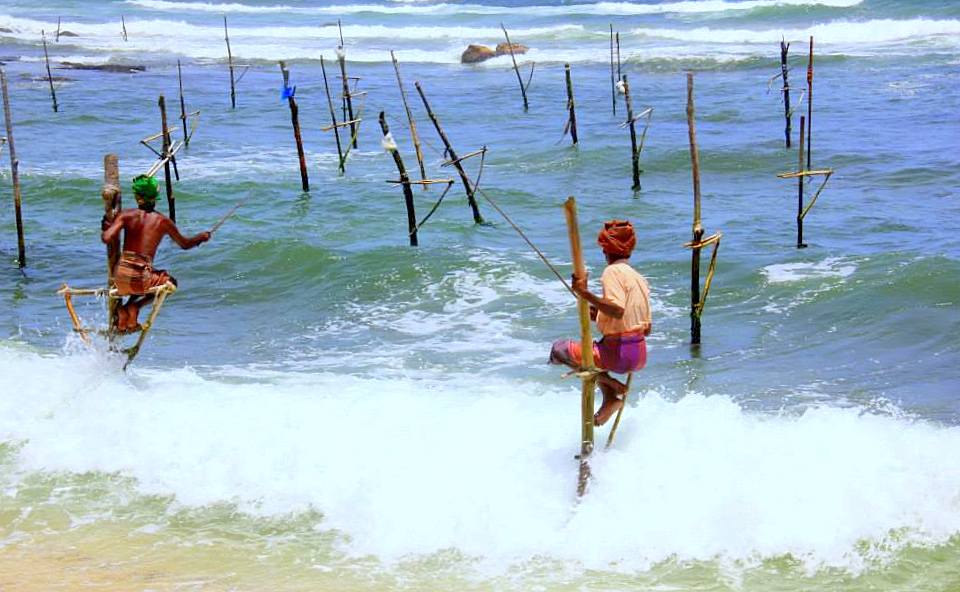 The stilt fishermen and cave temple of Koggala

I stopped for a night at Koggala on my way to Galle from Mirissa. The transfer was by local bus and it took around 45 minutes. Kogalla is famous for its iconic stilt fishermen, who are synonymous with Sri Lanka tourism. The drive is along the broad sweep of the southern coast and one can see the fishermen from the road. They perch precariously on wooden stilts above the waves and from a distance resemble large sea birds. Upon going closer, one can see that each fisherman has a pole firmly stuck on the sandy bottom close to the shore and he sits atop on a crossbar to cast his line. The stilt fishermen of Sri Lanka shot into fame when Steve McCurry photographed them and ever since, the world has remained astonished at this clever adaptive method of fishing.

See the practice of stilt fishing

See the stilt fishermen at Koggala

Known as ritipanna in Sinhalese (the local language of Sri Lanka), stilt fishing is a traditional method for fishing practiced by the fisherfolks along the southern coast of Sri Lanka. This practice is still carried on in Ahangama, Koggala, Welipenna,  Kathaluwa, and Thalarambe. Each stilt accommodates one or two fishermen at the most and a special rod made of Kithul is used for catching fish. The fishermen get up early to clamber on their stilts and they carry small plastic bags tied around their waist to hold the catch. There they wait for hours to catch small fish like the spotted herring and tiny mackerel and in the evening, the performance is repeated to entertain the tourists.

Ritipanna came into practice during World War II when food shortages and overcrowded fishing spots led some inventive fishermen to try fishing being perched on the water. In the beginning, they used the wreckage of capsized ships and destroyed aircraft to perch upon and later the practice of erecting stilts in coral reefs began. According to the stilt fishermen, ritipanna requires a lot of patience and endurance. The difficulty starts with striking a balance while sitting on the wooden crossbar and then is the endless waiting in absolute silence. The slightest movement or sound disturbs the fish and thus it is no wonder that the meager returns these fishermen pull from the sea are not enough to keep the practice alive. That is why nowadays, most of the Sri Lankan stilt fishermen are actors who hire the stilts from the fishermen for the benefit of foreign travellers and many tourists try their hand at stilt fishing for a cost.

There is not much to recommend Koggala apart from the stilt fishermen and the famous Koggala Lake. It is a little seaside town that is bound by a reed one side and the expansive Koggala Lake on the other. The Yatagala cave temple is also nearby and this was the highlight of my Koggala stay. The Yatagala Raja Maha Viharaya is a quiet rock temple with a 9m reclining Buddha and its mural-covered walls are painted in the typical Kandyan style. The temple has been in continuous use since 1500 years and monks have been living there for centuries. According to the local legends, Yatagala temple runs back to the time of the Anuradhapura Kingdom and it was built around and within giant boulder-like rock formations.  A steep flight of stairs leads to the temple and the views from the top are very beautiful.

Baby turtles at the hatchery near Koggala beach

Apart from these, Koggala is a place where you spend a day or two at the maximum and move on further towards Mirissa, Unawatuna, or Galle for more excitement. One can also visit a local turtle hatchery to understand the fishermen of the area have weaned away from poaching the eggs and took up conservation measures. Though in recent years, these hatcheries have received much bad press over unethical practices, when I visited one in 2013, I found it to be a good professionally run initiative. There is not much to do in Koggala apart from these sights and slow travelling, and I had moved on to Galle quickly. Galle was too touristy, sterile, and over-commercialized in comparison to the rest of the southern coast and I soon found myself wishing to have stayed at Koggala instead. Small, relaxing, and very laidback, Koggala is a kind of a place where you hang your hat and put up your feet.

Known for its emerald water of Indian Ocean, broad golden beach, and iconic stilt fishermen, Koggala is an upcoming travel destination of Sri Lanka. It is still very laidback and makes the perfect getaway for those looking for a place for slow traveling. Take a look at this Koggala travel guide to have the best time at this coastal gem.

How to Reach Koggala

The train ride from Galle takes half an hour and there is a service ever four hours. There are plenty of buses and shuttle cars available from Mirrisa to Koggala. This drive takes only 20 minutes.

Places of Interest in and around Koggala

Getting out of Koggala

Head over to Galle, Colombo or Mirrisa.

Koggala is an upcoming

Famous for the sight of stilt fishing,

From Galle, Mirrisa, and Colombo.

It is a lovely

That is perfect for

And an easy pace,

Koggala is a place

To hang up your hat

Perfect as a day trip from Galle,

Just make sure to visit

Admire its murals, and