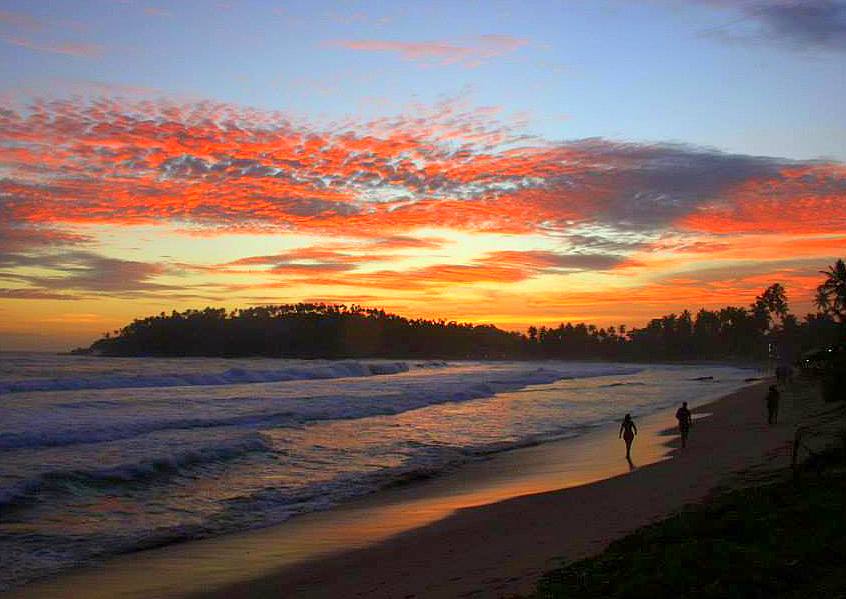 Mirissa smelled of heavy salty wet air, damp greenery, and petrol fumes. I arrived there on the afternoon from Colombo and thick tropical rain had splashed on my train. The track which had briefly run along the coast was smooth and the views were worth the ride. Mirissa arrived amidst lush coconut plantations, wet paddy fields, rich red earth roads and lots of dripping umbrellas. The locals and taxi drivers had come rushing to meet the train and a pool of people had filled the little station. It was a bit of a strange sight to see so many people on such a tiny train station and it took me quite some time to get out of the crowd. Bargaining for a taxi ride to the main village again meant more delays and I finally reached my guesthouse a couple of hours post-arrival at the station.

Mirissa is a backpacker’s paradise

My guest house was a locally run budget on the beach shack, and it was clean and comfortable. I could see the aqua green sea from my wooden porch and the breakfast of Lankan appams and curry were wholesome. It was quite a blessing that the Mirissa guest house was pretty worth every penny because I hardly made any efforts to explore the much renowned Sri Lankan beach destination. Famous as one of the most appealing places to spend by the sea in southern Sri Lanka, Mirissa is a popular backpacker “hanging the hat” kind of a place. The beach is quite pretty and it has a fine golden sweep of sand. Lush dense coconut forests encircle the curving beach and a small rocky outcrop creates a picturesque headland at one end. Sunsets are spectacular there and on a clear evening, stars shine bright and hard.

Recommended Read: WHAT I LOVED ABOUT SRI LANKA

Slow travelling is the best way to enjoy Mirissa

The beach despite being nice is not very becoming since a busy highway runs right next to it and the entire stretch along the coast is a swish of various types of touristy housings. From ugly modern concrete blocks to rustic charming resorts, Mirissa‘s accommodations draw hordes of young travellers. It is also well known as a whaling destination and there are excellent chances of spotting the blue and sperm whales close to the shore. This, however, creates an environmentally hazardous situation during whaling season and Mirissa‘s sea is choppy.  The best way to enjoy Mirissa is to just laze in the hammock, sip tender green coconuts and relax your hours away. That is exactly what I did and once, on a very early golden dawn, I ventured out into its busy fish market. That is perhaps my nicest Mirissa memory and the sight of colourful fishing boats docking to unload glistening catch was a mesmerizing sight. The rest of Mirissa was pretty forgettable and it was a relaxing filler in the midst of my hectic Sri Lankan work assignment.

A picturesque train ride to Mirissa from Colombo

By Bus: There are regular bus services between Mirissa and a number of places in Sri Lanka, including Colombo and Tangalle. In Mirissa, buses drop off passengers near the beach from where tuk-tuks are required to reach the accommodations.

Private transfer: Many travellers look up Sri Lanka Backpackers and Backpacker Taxi Share Sri Lanka on social media to share private transfers with other tourists. Sometimes, these transfers make more sense in regards to accessibility. For example, getting to Mirissa from Ella and Nuwara Eliya is quite hard by public transport and if you travel by bus you will need to make at least one change. A shared taxi in such cases turns out to be boon and the costs seem quite nominal.

Suggested for You: COLOMBO TRAVEL GUIDE

The train to Mirissa goes along the Sri Lankan coast

Getting around in Mirissa is easy, with plenty of tuk-tuks. They accept only cash and negotiate the price before getting in. To explore the surrounding areas, it makes sense to rent a scooter or hop on one of the buses passing through the main road.

Mirissa’s peak season is between December and March. January, February, and March are the driest months. April and May tend to be the hottest months, but the increase in temperature leads to more rainfall. Remember that Sri Lanka as the country has 2 different monsoon seasons.

Things to do in Mirissa

Surfing and other water sports

Lush and green is the southern part of Sri Lanka

Other travel tips for Mirissa

Village of Mirissa as it looked at my first glance

Mirissa Beach is a pretty place on a clear day

But it has no spectacular charm and

Is a predominantly low key destination,

The best thing to do

In Mirissa is to let your hair down

Soak in the local culture,

And go for photo walks.

Mirissa is a spa for the soul.