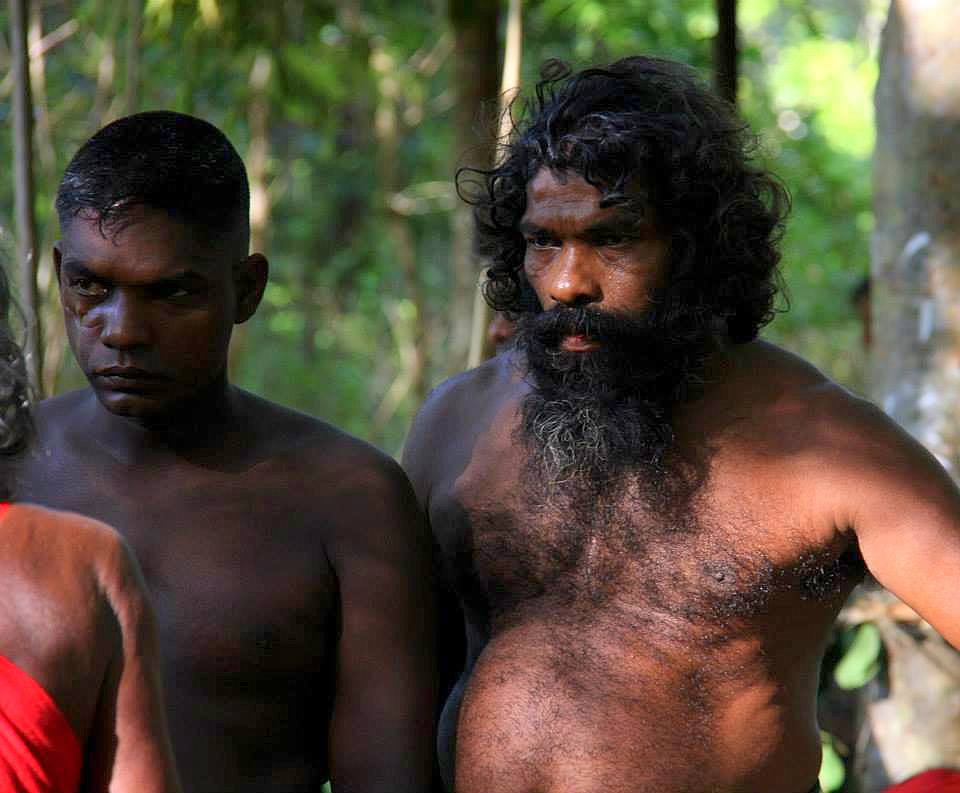 Kotabakina was teeming with tourists when we walked into its neat clean-swept dirt square. Sri Lankan families complete with boisterous children mingled with bored looking foreign travellers and coach full of school children trooped in under the watchful eyes of their teachers. It was like a complete carnival and I was shocked at the reality of the so-called “elusive Vedda tribe village”. It turned out that Kotabakina was one of the most easily accessible and popular villages of the Veddas. Though it felt like a little Disneyland, the money commercial tourism was pumping into this Vedda village and the tourists’ desire to see the traditional tribal ‘culture’, was proving to be actually effective in stopping the last of Vedda from being swallowed up by mainstream Sri Lankan culture.

The Veddas, or the Wanniyala-Aetto as they are locally known, are the last indigenous people of Sri Lanka. They claim royal ancestry and theirs is an origin full of myth and natural history. Veddas trace their descent to Prince Vijaya, the grandson of a lion and the legendary founder of the Sinhalese nation. According to the Vedda legends, when Prince Vijaya came to Sri Lanka from North India, so the legend goes and he had sexual relations with a local demon princess named Kuveni. Kuveni gave birth to a boy and a girl and the Veddas were borne out of the incestuous union between this brother and sister. Anthropologists believe that the Veddas are Sri Lanka’s aboriginal inhabitants prior to the 6th century BCE. Hunter-gatherers and forest-dwellers by tradition, Veddas usually dress in a sarong and are bare-bodied from the waist-up. The Vedda men carry an axe slung over the shoulder and only a handful of them continue to hunt, fish and forage Sri Lanka’s forests. They gather wild honey and forest herbs and once upon a time used to hunt game with their bows and arrows. Their diet is mostly meat-based dishes and one of the most unique dishes of the Veddas is the monitor lizard tail marinated in honey. In fact, this is what got me intrigued about this community and Alfred’s lies also started from here.

This is what happened earlier: A DELUSIONAL SCAMSTER AND AN ADVENTURE TO DAMBANA

Veddas are traditionally hunters and gatherers

The traditional hunter and gatherer of Sri Lanka

After we reached the village and presented our gifts of betel nuts to the tribe chief, Alfred went to procure our lunch. He made me wait with the chieftain and we sat in an awkward silence owing to our language barrier. The headman eyed me with open curiosity and occasionally flung a word or two to his entourage. Whatever he said made them all stare at me and my discomfort increased with each passing moment. After what seemed a very long time, Alfred arrived with two parcels of foo wrapped in leaves and the headman offered us some drink in coconut shells. Being hungry, I ate ravenously and watched Alfred chat with the chief in an engrossing manner. By then, I knew enough of the Sri Lankan cuisine to differentiate its dishes and balked in amazement, as Alfred proudly claimed that our lunch included the famous monitor lizard tail. It was by sheer will-power that I managed to bite my tongue from inflicting a stinging repartee and it turned out to be an excellent decision.

The Veddas culture is nearly extinct

An ancient community on the verge of extinction

Alfred, being extremely pleased with my naivety, went out of his way to please me and he persuaded the Vedda chief to allow us to spend the night in his village. There was some kind of community celebration going on that day and a big feast was being prepared for the night. I spent the rest of the afternoon visiting the nearby Maduru Oya National Park and it was teeming with elephant herds. By evening, when all the tourists had left, Alfred and I joined the chief’s family and we all sat in a circle in the open courtyard, discussing life. Veddas find daily existence to be a continuous uphill task and the timber poachers made their forests shrink every year. With the forest cover disappearing fast, their traditional lifestyle is at the brink of extinction and the chief lamented how nobody in his village knew the Vedda language anymore. The Veddas of Kotabakina spoke Sinhala and the last Vedda language speaking local was a 98 years old man who had died the previous year.

A Vedda shamanic ritual is underway

A glimpse of the life of the original forest dwellers

Their skills which consisted mainly of hunting and foraging were no longer required and most Veddas had taken up farming or seeking employment in cities to make ends meet. To my ears, this was an often-heard complaint of minority communities in many parts of the world and I realized that I was experiencing a lifestyle that will no longer exist a few years down the line. It felt strange to be a part of such frailty and I watched the chief’s betel nut stained red teeth gleam as he spoke volubly about the Vedda issues. That evening, after dinner, the chief took us deeper into the forest which was the buffer zone of the Maduru Oya National Park and from a distance, I could hear the rhythmic drum beats. As we walked through the forest, following the chief’s footsteps, a strange sensation came over me and I had a feeling of going back in time. Insects calls filled the forest, night birds hooted, and the rustling of the leaves showed glimpses of a dark night. A huge number of stars, the size as big as large solitaires sparkled in the sky and the drum beats got punctuated with human sounds.

The ritual which worships the spirits of the dead

Experiencing the worship of the dead

The noises came from the community celebration that was being held in the middle of the forest and a group of Vedda men in traditional loincloths and axes were making music. They beat drums, chanted rhythmically in unison, and were building a platform of sticks and leaves. Being believers of animism, the Veddas worship of spirits (yakku) rather than of any gods and some were these spirits are of recently dead ancestors. These spirits are believed to live in hills, caves, and rocks and are invoked on the fifth day after death. Offerings of coconut milk and rice are made and the ritual involves the Vedda shaman becoming possessed by the spirits of the deceased. The Na Yakku must obtain Kande Yakka’s permission to help the living and accept their offerings. That night, the Vedda community was celebrating to invoke the spirit of a recently deceased person and the music was meant to begin the trance.

Are the Veddas going to be another victim of the 21st century?

Are the Veddas another human relic of the 21st century?

It was hypnotic music and the chants were in a language that I did not understand at all. Yet, something made me remain transfixed to the spot and I spent the whole night there, watching the Vedda shaman dance, chant, become the mouthpiece of the spirit and accept the offerings. Everybody present there seemed to believe in the ritual with their heart and soul and I felt as if I was watching a movie. It was strange, to sit there amidst the worship of the dead, be surrounded by descendants of original Neolithic community dating from at least 16,000 BC and yet remain aloof from it all. I spent the whole night in the forest and it was dawn by the time Alfred and I decided to head back to Kandy. The ritual was still continuing even when we were leaving and I turned back to get the last glimpse. It was my last glance at the fast disappearing Vedda people of Sri Lanka and I realized that the moment would never come back. The 21st century is the century of species extinction and Veddas too may become relics of Sri Lanka’s past.

A scene from the road trip to Dambana

How to visit the Vedda village of Kotabakina

The Vedda people of Sri Lanka are under intense pressure to keep their cultural ancestry alive and today only a few hundred traditional Vedda remain.

The Vedda stronghold of Dambana

The last Vedda stronghold is around the village of Dambana, which is east of the small town of Mahiyangana. To meet the Vedda people, it is advisable to find a translator-guide once you reach Dambana. Though the experience feels staged, in this case, mass tourism might be just the boon that may prevent the last of the Veddas from being swallowed up by mainstream Sri Lankan culture.

Kandy to Mahiyangana for the Vedda village

The best base for a Vedda village visit is the town of Mahiyangana. It is just a few hours away from Kandy and there are two routes leading to Mahiyangana. The spectacular A26 north road goes past the Victoria Reservoir to Madugoda, before twisting downhill through 18 hairpin bends to the Mahaweli lowlands and the dry-zone plains. Drivers prefer the road along the southern shores of the Victoria and Randenigala Reservoirs, which is much faster and in better condition.

The only highlight of Mahiyangana is the dagoba where, according to legend, the Buddha preached on his first visit to Sri Lanka. There are a few basic lodging options in Mahiyangana. One can find buses leaving for Kandy, Badulla, and Polonnaruwa from the town bus station.

A Vedda man selling their traditional forest herbs at his village

And whose home is under constant threat from over logging.

Though an ancient indigenous community

They are very integrated

Into the mainstream Sri Lankan culture.

Most of them do not even know

Their own traditional language

And the Veddas are forced

To give up their thousands of years old identity

For the sake of survival.

Are the Veddas of Sri Lanka going to be another relic of human existence?

Follow the rest of the Sri Lanka series here