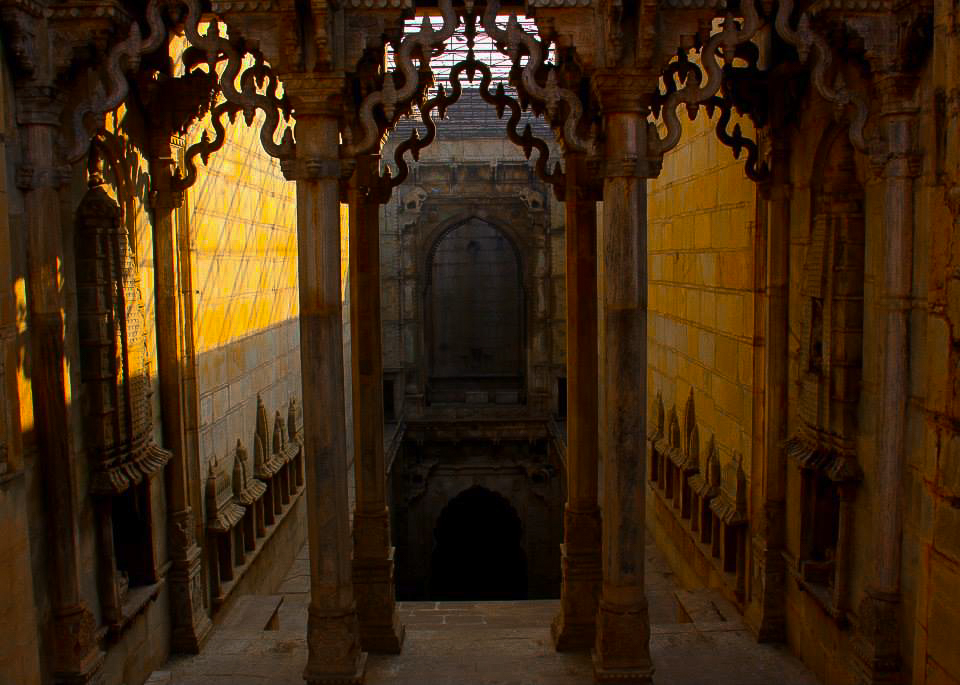 Bundi stepwells and the story of a heartbroken queen

For a town as small as a dinner plate, Bundi abounds with stepwells. There are as many as 50 Bundi stepwells and these are dotted throughout the town. Many lie on the outskirts and most of them are in a state of disrepair. As I mentioned in my previous posts, Bundi does not have a sterilized well-preserved state like Jaipur or Udaipur. The whole town seems to be slowly being taken over by wilderness and decaying edifices add to the lost kingdom aura. All across the town, you will see crumbling cupolas rising above a thick green cover of trees and monkeys and langurs swinging from ornately carved columns. Here and there, the greenery gives way to a stepwell and you can find local washerwomen pounding dirty laundry in their murky water. Some still retain water palaces perched at their edge and faint decorations of frescoes can be seen adorning those monuments.

Bundi town has a lot of stepwells

Big or small, maintained or in disrepair, most Bundi stepwells have three things in common. Let’s call them Bundi stepwell staples: things that you can see at nearly every stepwell in town. These are bathing or washing local people, monkeys or silvery langurs, and lots of pigeons. Gnarly banyan trees can also be found in most of them with their pervasive roots aggressively taking the monuments apart. Pigeons and monkeys are common Bundi stepwell peeves and they often cause much annoyance to the visitors. While the solemn langurs are satisfied in just watching your movements from a distance, the smaller rhesus monkeys do not hesitate in snatching or attempting to snatch things from the tourists. The pigeons are a completely different matter and the worst they do is poop all over the place. As I have mentioned, again and again, Bundi monuments are not well maintained and the stone steps of these edifices are often broken. Add to that splotches of fresh pigeon poop and you have the perfect recipe for a sprained ankle.

Bundi stepwells are in a state of disrepair

Unfortunately, that was my experience at one of the most beautiful Bundi stepwells where I slipped over pigeon poop and sprained my ankle. Known as Ranji ki Baori, this stunning stepwell was constructed in 1699. At that time, water shortage, especially in the summer months was a much-dreaded phenomenon. To avoid this, every ruler and rich person in the northern and western parts of India commissioned stepwells to be built. These deep wells could be accessed by a series of steps and they were often housed within a monument. Used for storing rainwater, stepwells were often multi-storied and covered with intricate carvings. Since they also served as areas of leisure for the patrons, the upper chambers had galleries in which the upper crust could enjoy the cool breeze away from the prying eyes of the commoners. Over the years, the stepwells became places of worship and were often used for holding large ceremonial gatherings. Bundi being in Rajasthan is also adorned with stepwells and though most have dried up water tables, they still present stunning remnants of the past.

Ranji ki Baori – the most beautiful of Bundi stepwells has a very sad story attached to it. 17th century Bundi was ruled by King Anirudh Singh. He did this task jointly with his first queen who was also his favourite. However, the first queen failed to produce an heir, and the king out of compulsion married princess Nathavati. Although he got a second queen for the sake of a son, his heart remained with his first queen. So when queen Nathavati gave birth to a son, the baby was taken away from her. The custody of the child was given to the first and the rival queen. Queen Nathavati was completely heartbroken and to distract her mind from this grievous and cruel estrangement, she busied herself with humanitarian work. She did much for her subjects and the Ranji ki Baori is the crowning jewel of her work. Ornate in design, this multi-tiered stepwell is decorated with intricate carvings and is 150 feet deep.

Go there in the early morning and I promise you that you will find peace there. With only the guttural ‘guttur-gu’ calls of the pigeons or the sound of the flapping wings filling the air, Ranji ki Baori will instantly calm you down. There’s something about the mute carvings of the elephants, the honey coloured old stones, or the dust particles dancing in the filtering sunlight, that makes you not want to leave this place. Sounds seem to be absorbed in here leaving only a cool, hushed silence – and it is the silence of offbeat rural India.

Ranji ki Baori is multi-tiered and 150 feet deep. It has a slender entry gate that is flanked by four pillars. These are joined at the top by tapering arches decorated with intricately carved stone brackets.

Read these beautiful posts on Bundi step wells. Written by prolific explorers, some of them describe each stepwell with more details.