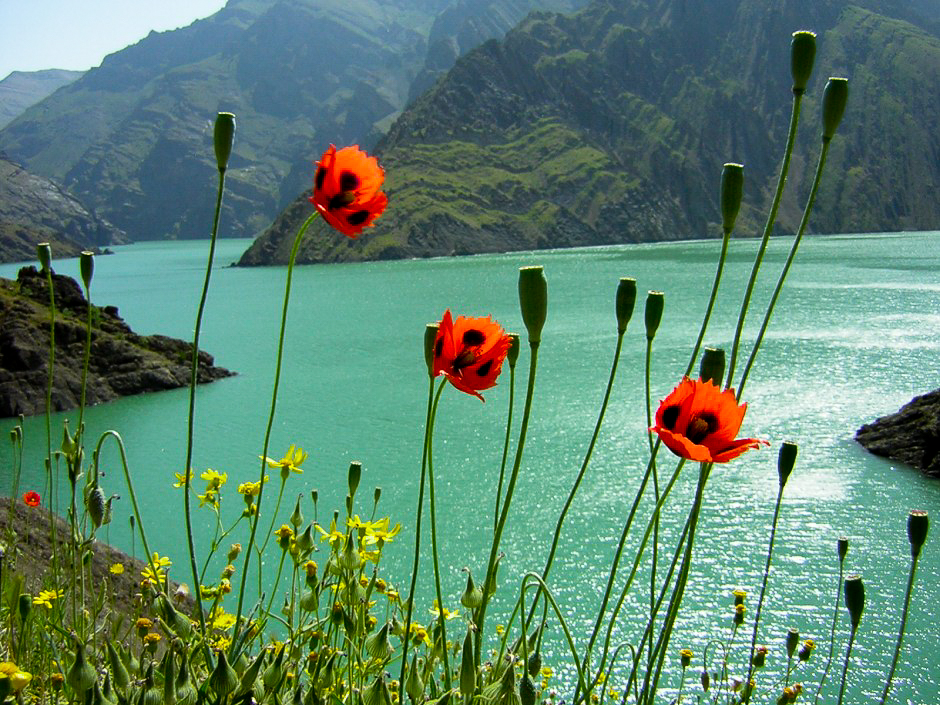 We were back on the road soon after a few relaxing Gilan days. My humongous Iran road trip was just halfway and it was already sapping my enthusiasm. My initial plan included a visit to Badab-e-Sourt hot springs in Mazandaran province. A beautiful natural phenomenon, it is similar to the spectacular Pammukale in Turkey. The distance between the two cities however was nearly 400 kilometers and Tiam ominously warned me to expect worse hotel standards there.

This is how highways look during Iran summer holidays

The terrible Gilan hotel experience left me badly shaken and the food made me violently sick. I reached a point when I wanted a cozy bed at the end of the day and road rage started rearing its ugly head. So I changed the itinerary and we drove towards the popular ski resort of Dizin. It turned out to be a terrible idea and the drive to beautiful Dizin seemed like a never-ending journey. Summer holidays made the whole of Iran get on the road and every family seemed to be heading that way. The roads from Gilan were choc a block crowded and rain created huge puddles on potholes. Surprisingly the roads in that area, unlike the rest of Iran were bad, and rain, sludge, and serpentine traffic worsened the experience.

A drive to Rasht to Dizin along the Caspian Sea

The route however was very pretty and we drove along the beautiful Caspian Sea. Pretty places like Ramsar popped up now and then and softly curving green mountains bordered one side of the road. Orchards, blooming gardens, and fragrant pine forests dotted the rolling landscape, and a breathtaking cable car zipped from the mountains to the sea. It was late evening by the time, we crossed Ramsar, and the rain made the traffic move at a snail’s pace. By the time the little hill station of Chaloos appeared, the wet evening deepened into dusk and the blinding rain obscured visibility. Chaloos stood at a slightly lower altitude than Dizin and although, only a few hours away, the deadlocked traffic made our destination an impossible dream.

Gilan is a pretty province

Yet another bad hotel experience

Hunger and exhaustion made us give up on our Dizin dream and we stopped over at Chaloos for the night. Finding a hotel at Chaloos was also quite a task and we drove around in the rain until we found one. It came with a restaurant, some rooms to let, and that was enough to make me overlook the mouldy carpet, a tiny closet bathroom, squat toilet, and squashed mosquitoes on the wall. We needed a place to rest for the night and on that cold, rainy Iranian night it was perfect. Travel is a hard taskmaster at times and one of the biggest lessons, it teaches is being able to adjust. So I adjusted that night in a stinky mosquito-filled obscure Iranian hotel with exhausted Ashkan snoring thunderously on the couch and spent the night listening to the rain. It reminded me of wet evenings back home in Calcutta. Needless to say, I spent a sleepless night, and it was at the first flush of dawn when I dragged a sleepy Ashkan back on the road. Tehran was on my mind and I hoped to miss the holiday traffic with our early start. I was also looking forward to the stretch between Chaloos and Tehran and according to Tiam, it was one of the most beautiful drives in the country.

A beautiful morning on Iran highway

Chaloos to Tehran drive, the most beautiful in Iran

It was indeed spectacularly beautiful and the sheer amount of natural diversity was mind-boggling. Immediately upon leaving Chaloos, our little beat-up car bravely plowed through lush misty cloud forests and ancient, empty and dripping with mist, they resembled a lost world. The road was hauntingly empty and we stopped briefly for tea and to watch a pale sunrise. The peaceful beauty of the place was very moving and for some time, the sleeping planet seemed achingly innocent. And it belonged to us – me and trusty, Ashkan, the entire vista of dripping ferns, clouds, and young silver sun. The world magically came alive with the brightening sun and sounds quickly filled the space. Broken from our spell, we resumed our drive and soon left behind the beautiful fern-filled dew dripping tunnel to head towards the capital. Bored morning fish sellers looked at us with gummy eyes as we slowly passed by them and their fresh catch glistened from colourful wooden boxes. The cloud forest disappeared just as suddenly as it started and immediately in its place, brown stony mountains took over the landscape.

Fried fish lunch by a river and pear trees

Those mountains were as harsh as the forests were soft and along with them appeared a series of endless tunnels. They bored through the heart of the ancient rock structures and sometimes cut beautiful artificial gaps, through which ribbons of traffic snaked past. Beautiful green rivers tumbled along with the way and heavily fruiting pomegranate forests dotted the brown in clumps. It was the pear and chinar tree (similar to maple) region and young ruby red leaves crowned the branches like fire. The fruiting season was on and ripe golden orbs of pears scented the mountain air slightly sickly sweet. It was a lovely day, befitting the beautiful region and for once we relaxed, shopped, and cruised along at a leisurely pace. The whole route was one huge fruit market and we munched on pears, peaches, and grapes bought from a farmer on the highway. Hours flew pleasantly past and we drove steadily until our lunch break at Kharaj. It was at a traditional Iranian restaurant by the river and we rested, gorged on the delicious fried fish, a Kharaj specialty, and enjoyed the crisp noon sunshine. It was too lovely for words, almost like poetry with a gurgling river, blooming roses, and sun that felt perfectly mellow. The noise and bustle of Chaloos seemed like another planet and we rested there until late noon. It was one of our rare leisurely moments when Ashkan and I bonded wordlessly during our entire road trip and for both of us, it was a much-deserved break from the constant road weariness.

Tehran, the capital city of Iran

We started for Tehran with the late noon sun on our back and the huge Iranian capital city appeared quickly. It brought along with it, noise, traffic and lots of dust. I watched Tehran shimmer in pollution haze in the sunlight. Reputed to be one of the world’s most polluted cities, the picturesque Iranian capital featured last on my favorite places list and bad memories from my previous visits flashed through my mind. Street art, Azadi Tower, and beautiful people blazed past my awe-struck eyes, as portraits of Imam Khomeini stared at us from everywhere. The contrast, extremes, and magnificence of the city were overwhelming as Tehran welcomed us with half-open arms. It was time to do a full circle and revive the place from where it all had started, the first journey of Maverickbird.

Tehran, the place where Maverickbird was born