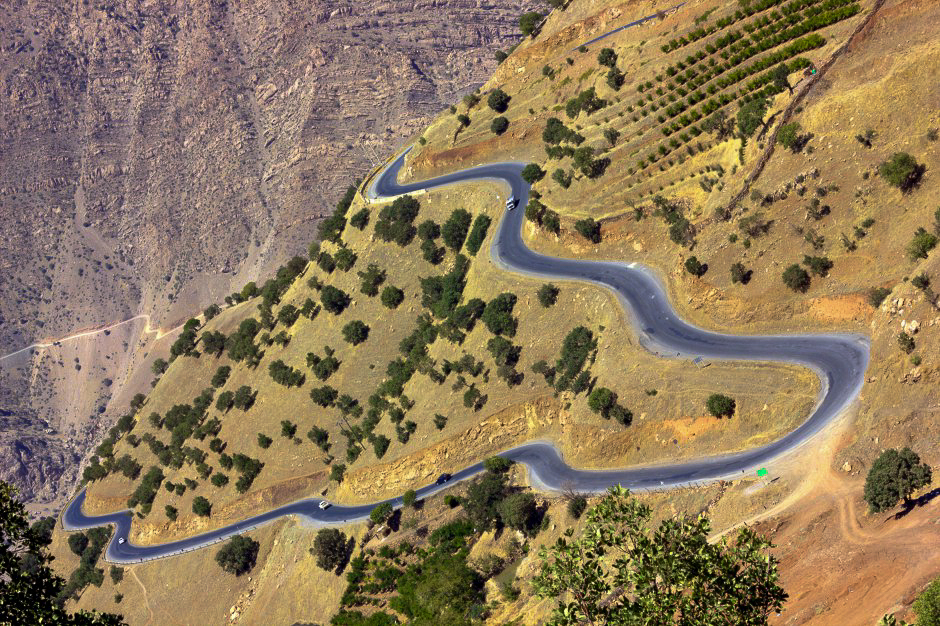 The next morning, right after breakfast, I met Ms. Bahareh Taherian, my local Kermanshah guide. She had been strictly imposed upon me by Tiam, who severely disapproved of my Oramanat travel plan. Bahareh arrived on time, filling the morning lobby with a cheerful sunshiny smile, and her quiet mother tagged behind her. While I was fairly excited and looking forward to an Oramanat exploration, it was Ashkan who went nearly mad with happiness. After days on the road, being cooped up with a grouchy me and a language barrier, just the thought of being able to talk freely in his own language, made Ashkan giddy with joy. His eagerness came to me as a mild shock and I felt slightly jealous too. Our road trip had already started testing our endurance and being too caught up in my own woes, I never realized how much my co-traveller also suffered in equal measures.

On our way to the Oramanat mountains

Thus my first Kermanshah day started on a benevolent note and Farsi flowed like water inside our little car. Happiness made Ashkan drive at a snail’s pace and he seemed to want to stretch the journey as long as possible. With Abyaneh harassment still fresh on my mind, it did not take much time for me to turn churlish at the delay and I simply wanted to rush headlong to Oramanat with reckless abandon. To keep my rising temper in check, I stared out of the window listlessly and took in the sights and sounds of Kermanshah. It was a lovely, warm day with soft golden sunshine and an open blue sky. Kermanshah’s clean rural beauty made me gasp out loud in amazement and I watched in awe at the fertile agricultural land stretching on both sides of the road. Here and there along the highway, farmers sold fresh produce from vine-draped wooden shacks, and these ranged from huge yellow sunflowers, grape clinging vines to ripe fat tomatoes. Meadows and cork trees created cool, dark shadows and shepherds herded their woolly sheep along glassy smooth roads.

A blue truck on an Iran highway

A whole new era existed outside our car window and the pristine scenery made me feel very lonesome. Jealous of Ashkan’s sudden change in favours, I longed for some company and soon my pent-up travel frustration started rearing its ugly head. Being caught in a language barrier can be an awfully lonesome feeling and on that gorgeous, sunny day, it made me feel like a lost soul. Thankfully, sweet, shy Bahareh came to my rescue, and after initial hesitation, we chatted like old friends. An eager to please, fresh-faced university student, Bahareh was exceptionally fluent in English and loved Kermanshah from the bottom of her heart. Soon English too started filling the car and she slowly unraveled her beautiful homeland to my awestruck eyes.

A farmer selling vegetables on the Kermanshah highway

Kermanshah, a rich and old land

Located in the western part of Iran, Kermanshah province was an exceptionally gorgeous place that had more than its share of volatile, rich history. Long identified as one of the cradles of prehistoric human settlements in Iran, Kermanshah had a wealth of archaeological treasures that ranged from the Neolithic to the Bronze period. A rich royal past left Kermanshah with the marvelous reliefs at Taq-e-Bostan and the excellent UNESCO World Heritage Site of Bisotoun Complex. Its recent history too was quite important and until 2013 – the time of this trip – Kermanshah was actively involved in political skirmishes. The region played an important role in Iran’s Constitutional Revolution and it was badly affected in the Iran-Iraq war. However, at that moment, the sublime area of the proud Kurds seemed to be lying low and except for a heavy military presence, hardly anything gave any sign of trouble.

A Middle Eastern ethnic group, the Kurds are an extremely interesting community. Although, most historians referred to their group name as “tent dwellers” or “nomads”, the origin of Kurds remains unclear. This large ethnic group is spread over a huge landmass, most of which crossed borders. While Turkey, Syria, Iraq, and Iran have the largest number of Kurdish settlements, many branches of Kurds have been found as far as India, West Asia, including Cyprus, Georgia, Azerbaijan, etc. Although the Kurds are closest to the Iranians in terms of culture and language, their origin was in the Tigris basin in Iraq. This showed quite distinctly in the attire of the Kermanshah Kurds and apart from the stunning landscape, the indigenous local costumes were another spectacular highlight of the region. The local Kurdish men dressed in baggy overalls, broad waistbands, and headgear and they happily posed for the cameras. I loved how their heavy featured faces broke into crinkly smiles at the sight of a camera and it made them change from intimidating to vulnerable in a flash. The shy Kurdish ladies, however, were more reserved and in their loose gowns, colourful glittering waistcoats, and bright scarves, they peeped at us from their dusty mountain villages.

The Kurdish men of Kermanshah

I found the Kermanshah Kurdish community in the Oramanat to be extremely friendly and their open curiosity strongly belied the violent separatist image associated with them. Headstrong and deeply rooted in their culture, the Iranian Kurds seemed to live in their cocoon of timeless nomadic habits and Bahareh excitedly pointed out traces of their ancestral traits in midst of their modern lives. Summer vacation was in full swing during my last Iran visit and picnicking Kurdish families dotted Kermanshah fields, parks, and gardens. Seated on unfurled carpets, their entire families were busy cooking, gurgling water pipes, and grilling meat. Children romped about noisily and to my eyes, they resembled small groups of photogenic nomads. The drive that continued became lovelier as we headed towards Hajij, an obscure small village, located somewhere in the Oramanat mountains.

A Kurdish woman somewhere in the Oramanat mountains

Famous as a pilgrimage spot, Hajij was situated around two hours away from Kermanshah city and the formidable Oramanat mountains made it a difficult place to access. It was late noon, by the time we drove past the dusty, mountain town of Paveh when endless military and police check posts started popping up at surprising frequency. The glum faces, which looked surprised every time they scrutinized my passport, were in sharp contrast to the open, cheerful Kurdish smiles, and after that, too many blue pickup trucks slowed down our drive further. For some reason, most of the trucks I saw on Iran highways were of a childish, bright blue shade and they brightened up the dull grey roads like pieces of clear blue sky. Our lunch happened somewhere near the Qoori Qaleh cave where once again the familiar sight of masses of picnicking families surrounded us.

The beautiful Kurdish region of Iran

Qoori Qaleh was supposedly the largest cave with water in Asia and it contained rare species of bats, numerous multi-coloured, oblique pillars, and waterfalls in its depths. A total spelunkers dream, Qoori Qaleh’s grassy green surroundings, and lush forests attracted day-trippers from Kermanshah and the air was thick with the aroma of barbecuing meat. Our lunch was at a traditional Kermanshah restaurant that was prettily tucked away among pine trees and wild grass. We ate outdoors and fresh cool air blew down from the mountains. It felt like a splash of water and despite the noon heat, I shivered in my thin shirt. Kermanshah gets very hot during the daytime, except in winter when everything gets covered under a blanket of snow. Unaccustomed to being in fully covered clothing and headscarf in summer, Kermanshah heat nearly drove me mad, and the cool breeze came as a blessing.

Post a quick lunch of Chelo Kebab and Doog (buttermilk churned in goatskin bags and flavoured with wild grass), we resumed our drive into the Oramanat mountains. The scenery became more beautiful as we moved deeper into the hinterland and the lush greenery gave way to spectacular stony mountains. The road too became narrower and it went up and down the steep slopes. Covered with oak and cork trees, the slopes looked bristly and formidable and the international border with Iraq was not too far. Beneath a huge cloudless blue sky, the landscape looked stark and empty, and only lively rivers tumbling between narrow ravines rendered some animation into the scene.

Getting lost near the Iran-Iraq border

Soon, the human habitats got sparser as the stark mountains became harsher. The narrow winding road also became nearly nonexistent and we slowed down even more. Construction work of a hydel power project was going at a frantic pace and the brick coloured dust rose in thick clouds. The broken road jolted us badly and as we passed through endless tunnels and in the great blue cloudless sky, not even a bird could be seen. The formidable Oramanat mountains made their presence felt and they were harsh, hot, and inhospitably silent. We puttered in and out of endless tunnels, most of which were still under construction, and as water dripped from them ominously on our car, we prayed that they would not collapse on us. The thought of getting buried alive at the Iran-Iraq border, inside the bowels of inhospitable mountains was not very pleasant and I had the first tinges of fear trickling down my spine. Soon the road turned into a complete dirt track and Hajij was still nowhere in sight. Finally, after driving directionless for more than two hours, we realized that we were lost somewhere in the Oramanat mountains with the controversial Iraq border, looming close to us.

Although I personally did not have a single safety issue in Kermanshah province, it is advisable for a foreign tourist, visiting there to hire a local driver and a guide. The stunning mountains are also quite difficult to navigate and without the expertise of a local, it is easy to get lost. Kurdish culture is extremely enchanting and colourful and to experience its breathtaking beauty to the fullest, you will have to explore beyond Paveh town.