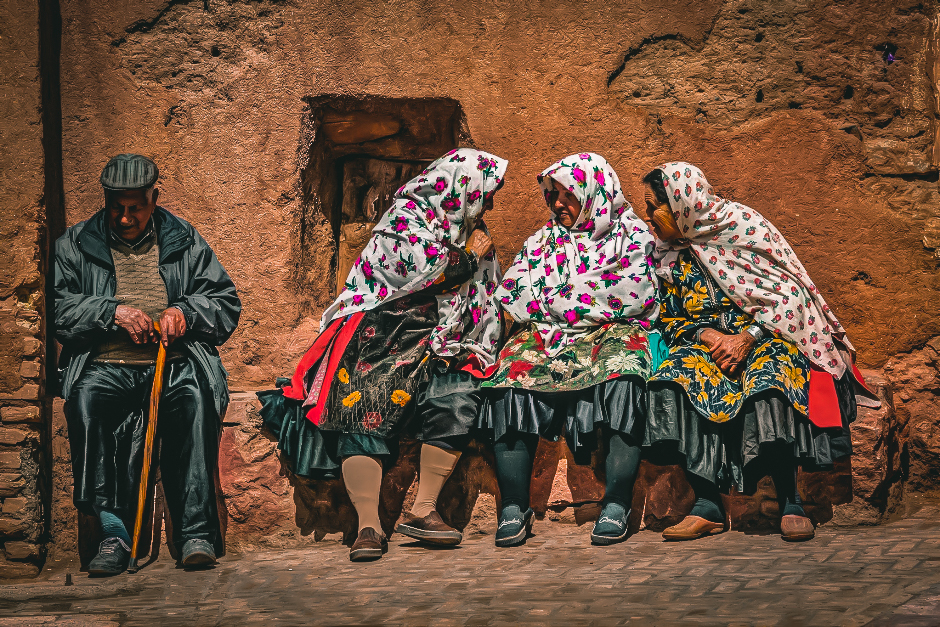 We left for Kashan from Esfahan. It was going to be our third stop on the Iran road trip. I had started from Shiraz, went to Esfahan, and was now heading for Kashan via Abyaneh. Since it was right in the middle of a national holiday in Iran, the road hassles us for a while. Traffic congestion made Iran’s smooth highways get choc-a-bloc full and for the most part of the day, we found ourselves snailing behind endless caravans of local holidaymakers. This continued until we reached the area around Natanz Nuclear Facility, one of Iran’s topmost secrets. The site of this facility was surrounded by controversies and intrigues and to me, it gave out a grim aura. Politically under safeguard agreements, Iran was not under any obligation to reveal the existence of the site and it was a secret until the ME commentator Alireza Jafarzadeh exposed the location.

Somewhere on our way to Abyaneh

Quite understandably, Iran was not pleased with the revelation and Natanz Nuclear Facility remained shrouded with controversies for a very long time. Located in the Esfahan province, it was housed in Natanz city which did not feature on our original route plan, but somehow on that fateful afternoon, we ended up at its periphery and found ourselves hopelessly lost among its scary military loops. The trouble started when we accidentally drove by a barbed wire restricted area twice and soon found intimidating cameras, numerous live tanks, and stern patrolling armed soldiers dotting the landscape. This scared Ashkan even more and we soon got hopelessly lost within its armed circuits. Our battered car on a long lonely road, amidst vast rolling fields, filled with live tanks obviously sparked doubts and it was on our third driving loop, that we found harsh orders and cold automatic weapons being pointed at us.

A fruit shop on the highway to Abyaneh from Esfahan

Bollywood bails us out

Now answering rapid-fire questions in a language you don’t understand is not easy and with live automatic weapons pointing towards you, the task becomes even more difficult. At times, ignorance is indeed bliss and on that day, my lack of understanding of Farsi kept me happily unaware of the severity of the situation. Ashkan however, was another story. He sweated, stammered, wept, and howled incoherently as the interrogators hurled questions at him. Finally, my foreign passport (and that too of a neutral country like India) came to our rescue and we were released with grim smiles, shouts of ‘Amitabh Bachchan’, and directions.

Sunset and Abyaneh is still far

It was nearly late noon, by the time the nightmare ended and Abyaneh was still away somewhere along the highway. A shell-shocked Ashkan was impossibly uncommunicative and I spent the rest of the drive staring out of the window. Solo traveling, with all its associating air of bravado and glamour can be awfully lonely and at that moment, I wished to be somewhere else. A seriously full bladder too made things uncomfortable, but the absurdity of relieving in a stark restricted area among fields full of live tanks, guns, and controversies, in one of the most conservative countries in the world, made me laugh out loud. The land around us resembled a prairie. It was vast and lonesome and feeling dejected, I turned up the volume of Ashkan’s raucous Farsi music to drown in its noise. Abyaneh still eluded us and I wondered more than once how the rest of the trip will turn out to be. Soon a rosy setting sun painted the desert-like land in pink hues and Abyaneh still continued to be out of reach. Our day’s plan went completely haywire and we eventually found ourselves following a family van along mountain roads, so as to reach some kind of human settlement. Miraculously, in the distance, Abyaneh could be seen soon. It blushed a deep red in the sunset and we had rushed to the first cafe that we found.

Pomegranates growing at a teashop somewhere near Abyaneh

An ancient village in the mountains

The ancient village of Abyaneh was hidden from sight and it was a fitting place for the fleeing Zoroastrians to escape from their Arab invaders. Though the light was too low for photography, Abyaneh still looked beautiful in the diminishing glow and the surrounding landscape suited the ancient village. Stark brown mountains, pomegranate, and walnut groves, and old mud houses filled the deep valley, where villagers led 7th-century lives. Life seemed to have stopped there, centuries ago and it was timeless in the truest sense. Only the gaggle of excited local tourists burst the atmospheric bubble, and we ambled down twisting mud lanes, to get far away from the crowd.

Since it was built into the face of the mountain, walking around Abyaneh was lung bursting and we paused every now and then underneath signature latticed windows and fragile wooden balconies. It was a beautiful old village and the resilience of the villagers was respect-worthy. Despite facing numerous pressure from the government for change, Abyaneh residents fiercely clung to their ancestral traditional attire and that was one of the biggest highlights of the village. Loose canvas pants, special shoes called “Giveh” and a long garment called “Ghaba”  completed the men’s costume. While traditionally, men wore felt hats, the women dressed with more colours. Abyaneh ladies’ traditional costume included colourful voluminous skirts over long pants, velvet vests, and signature floral printed long scarves. While this looked extremely photogenic, the only locals to be seen wearing the traditional attire were the elderly.

In fact, the entire village seemed to lack a new generation and despite its beauty, Abyaneh seemed extremely desolate. Most of its young population had migrated to cities for work and the result was a near ghost village where tourists crowded around old, wrinkled residents in traditional clothing, shoving cameras at their faces. The villagers in return peddled dried fruits, souvenirs, and traditional dishes to them. However, the locals were a bright, welcoming lot, who regaled the visitors with toothless smiles and one could see them chatting at tea houses and people watching.

An ancient way of life

It was late evening, by the time we left Abyaneh and I enjoyed the finale of a beautiful sunset there. The village somehow managed to look more time-warped and with evenings ended with tired men following exhausted donkeys back home. Their bells tinkled the homecoming and the womenfolk left gossiping under purple grape clusters to tend to their evening chores. Life seemed unchanged through centuries there with only the seasons bringing about adaptations and the residents adjusted accordingly. Winters in Abyaneh were quite severe and the springs made it look the loveliest. Flowering fruit trees dappled the red settlement with pink and white blossoms and spring water flowed fast. Summers in Abyaneh shaded everything with deep coats of red dust and only brave grapevines survived the heat. They created deep purple blotches against terracotta-coloured walls and overall, Abyaneh seemed like a very pleasant place.

We left Abyaneh soon and resumed the drive to Kashan with prayers on our lips. The hidden village lit up like a circle of light along the mountain and it sparkled brightly against a dark night sky. I tried imagining, what the villagers, cocooned in their little world, did during the night, the morning after, and every single day of their lives. Holding on to a 7th-century pace suddenly seemed like a monumental achievement and in my mind, it was time for Abyaneh to take a bow.