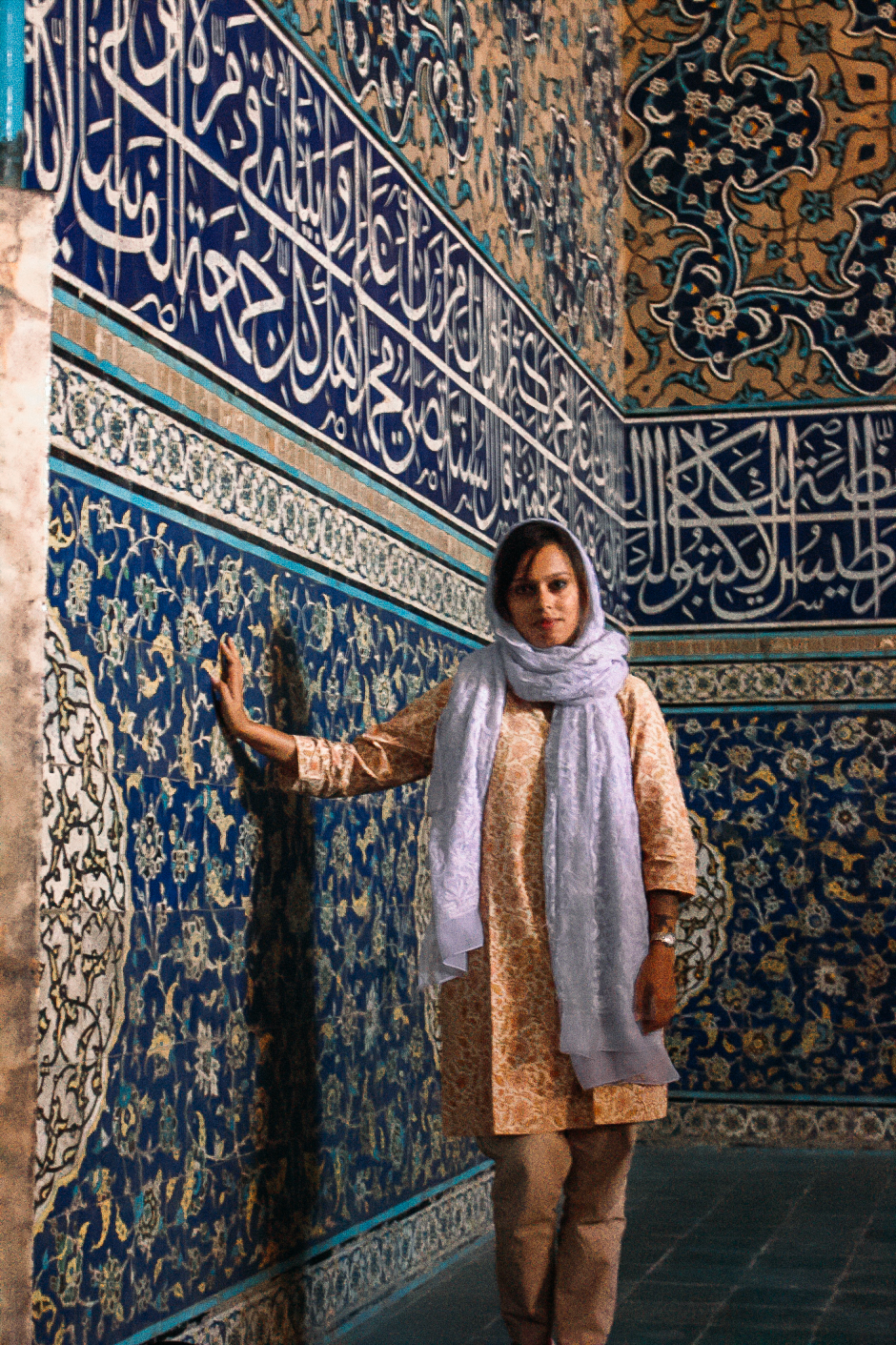 The best way to experience the beauty of Esfahan attractions is to take it easy. So I spent my last Esfahani day at a relaxed pace, paying slow visits to the other attractions of the city. The ‘Half of the World’ city, being the chief jewel of the Persian crown has many beautiful places and from the stunning 20 columned Chehel Sotun to the incredible Vank Cathedral, Esfahan attractions are a potpourri of architectural delights. The beautiful gardens and lovely wall frescoes of Chehel Sotun are charming and the ancient Vank Cathedral took my breath away. The magnificent Ali Qapu Palace, which belonged to the powerful Safavid dynasty was also magnificent and it was the perfect blend of antiquity and atmosphere.

Famous for its grand architectural style, Ali Qapu Palace’s highlight is the interesting music room with sitar-like grooves embedded on the stucco ceilings. The design provided an excellent surround sound system and the beautiful old building, shooting up to impressive 6 floors was the first Persian skyscraper. The fact that such a feat was conceived during the 17th century made it all the more fascinating and the palace also has a veranda on the third floor, which during its heydays had a fully functioning fountain. It was another interesting facet of the Ali Qapu Palace and the fountain used to keep the royals cool, while they enjoyed the stunning views of the Naqsh-e-Jahan Square down below. Apart from the little architectural details, beautiful murals and frescoes once covered every inch of the grand palace, but sadly, ruthless vandalism over centuries nearly wiped out all traces of its painted glory.

The dry Zeyendeh river and its historic bridges

The cruel scratching and senseless squiggles filled historical monuments immediately reminded me of India and sadly the comparison did not end there. The Zeyendeh river over which the famed Khajou Bridge arched broadly, was parched and the cracked, dry river bed at once again brought back sad memories of my own country’s countless dying rivers. Human wrath against nature seemed like an alarming global phenomenon and it was the sad sight of the dry river bed that actually hastened my departure from the city. It was a hot noon afternoon when Ashkan and I drove around the Esfahan attractions, and even under the spell of heavy siesta, the ancient city was irresistibly beautiful. Despite the shimmery noon heat, exploring the emptiness of Esfahan’s streets during siesta time was very relaxing and I remember staring in awe at the countless murals of Imam Khomeini decorating the city. Their stark crispness was in sharp contrast to the pastel-coloured sensual softness of Chehel Sotun’s frescoes and to me, they seemed like pages from Iran’s history.

Our last Esfahan evening and a shock

Our last Esfahani day thus ended with a sublime sunset over Khajou Bridge and before dusk, we bade the legendary city goodbye. It was a pleasant moment, to see Esfahan attractions again come alive with crackling spontaneity and we drove out with an uplifted mood. To enjoy the sunset and our last evening in Esfahan to the fullest, we drove up to one of the city’s poshest restaurants for dinner. It turned out to be a bad decision that showed the truth in the saying, ‘All that glitters is not gold’.  Our dinner venue was the ghastly Zagros restaurant which apart from its spectacular hilltop location, had nothing else to offer. Ironically, it was my driver Ashkan’s generous decision to treat me to a grand dinner there. Hospitality flows through Iranians like blood and even though, it dented his own allowance, his warm generosity genuinely wanted me to have the best. The restaurant, however, was a really bad one and it revealed the snooty, superficial Iranian local side to me.

Gone were the warm smiles, heart-touching kindness of the local people. In their place, the oddly decorated restaurant was filled with fake smiles, ludicrous gossip, and loud French perfume. Freshly botoxed and painted faces dotted the scene and the service matched the ridiculous environment.  Plastic surgeries in Iran were quite a rage at the time of my visit and taped up noses, chins, etc were signs of moneyed people. Despite its grand clientele, the Zagros Restaurant service was sickeningly slow and the food was pathetically below average. By then, I knew a good melt in your mouth kebab from a poor rubbery oily one and the Zagros restaurant failed badly in its culinary prowess. Nonetheless, it was an eye-opening experience to the other world of Iran, the world of the rich and playful, where English had slipped out with smooth accents and foreign homes had been just another possession. Our next day started early, and we left Esfahan soon to continue deeper with our road trip.

Keep at least 2-3 days to enjoy Esfahan attractions to the fullest.

Located in central Iran, Esfahan is one of the largest cities and is easily accessible by using different forms of transport.

By Plane – The city has an international airport with direct connections to 14 destinations in 5 countries. There are also domestic flights to Esfahan from all around Iran.

By Train – There are trains connections to most major places in Iran from Esfahan. The most frequent connections are to and from Tehran, Yazd, Kashan, Shiraz, and Mashad. Booking your ticket in advance is recommended.

By Bus – There are many bus terminals in Esfahan, with the ones in  Kaveh, Sofeh, Zayanderud, and Jey being the major stations. There are frequent daily buses from and to all major cities in Iran as well as there are buses commuting to smaller places.

By Bus – A single journey costs IRR10000 (November 2016); you can pay the driver directly, or buy multi-journey contactless cards at certain bus stop booths. Note that there are separate men (front) and women (rear) sections on each bus. From Kaveh Bus Terminal, take Bus 91 which runs down Chahar Bagh-e Pa’in St towards the city center, past Takhti Junction and Imam Hossein Sq.

By Metro – Esfahan Metro is a metro system serving the city. The first phase of Line 1 runs for 11 km from Qods in the northwest to Shohada via Kaveh (Northen long-distance bus terminal) to Sofeh (Southern long-distance bus terminal). A single journey costs IRR10000 (November 2018) you can buy multi-journey contactless cards at any metro station ticket seller office.

Ride-Sharing Apps – It is recommended for travellers to use ride-sharing apps such as SNAPP or TAP30 since they are cheaper than the regular taxi most of the time.

Esfahan has cold winters with temperatures between -2°C and 8°C (in January. Cold waves can occasionally lower temperatures to -10°C. There is one snowfall every winter. In contrast, summers are hot with highs reaching 36°C in July. The nights are pleasant with 21°C.

Walk along the Zayanderud River beside the ancient bridges. This activity is popular with the locals. However, as a result of a drought and a badly planned dam, there is usually no water in the river.

Esfahan, being one of the most visited cities of Iran has a lot of accommodation options. Check out 1st Quest and find the accommodation that suits your budget and style.