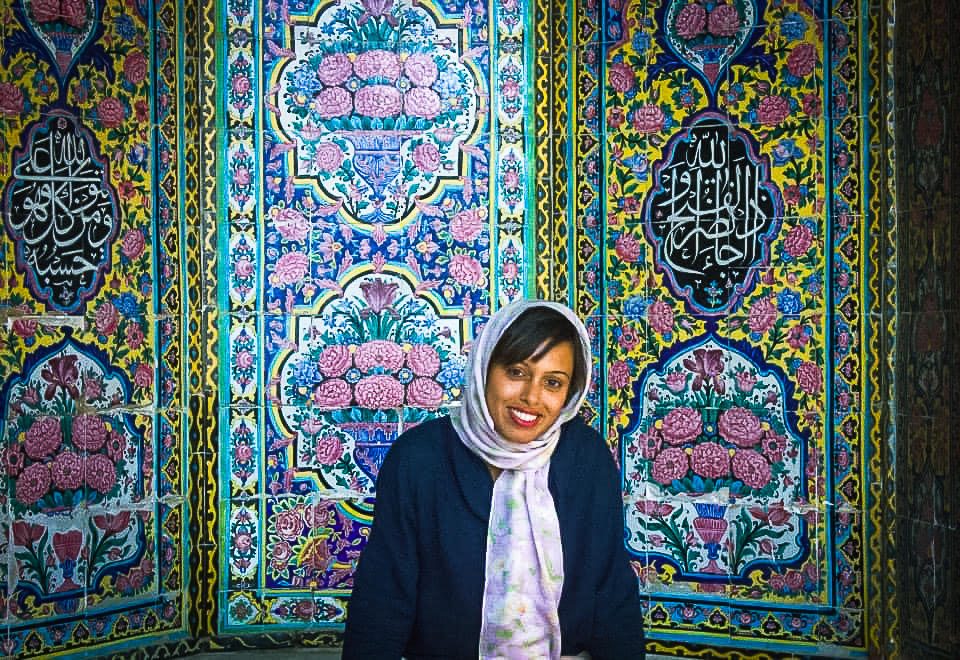 Shiraz had been pretty hot during the daytime in April, August and September but the evenings were just perfect. Balmy, breezy and full of life, the city had always buzzed with activity. Noon heat would force Shirazis indoor for long siestas and the entire city would shut down at that time. Evenings would bring the city back to life and once again tempting aroma of food, laughter and lively existence would ring through the air.

Shiraz, the aesthetic hub of Iran

According to Tiam, a proud Shirazi herself, her city people are the laziest in the whole of Iran and they kind of take pride in it. Except for the fact, that they pass off the laziness as aesthetic intellectual pursuits for which gentle use of time is required and hailing from an equally lazy city of Calcutta, I had completely empathized with the explanation. Sometimes, it had made me wonder if the aesthetic and mental similarities between the 2 cities had created my Shirazi addiction, but whatever may be the reason, the culturally rich and famously laid back city had felt like home.

Shiraz in all seasons

Luckily I had experienced Shiraz in all seasons and personally find it most beautiful in autumn. Rich autumn colours, chilly, brittle air and falling chinar leaves turn Shiraz into a vision and my favourite moments had been crunching on fallen leafy carpets with golden trees glowing all around on me. Shiraz is also breathtakingly beautiful in spring when flowers bloom riotously and orange trees scent the air with heartwarming citrus fragrance. Traditional Iranian tea houses hum with life in spring and people gossip, play music and gurgle water pipes under tender vines heavy with grapes. Pomegranates also bloom like no tomorrow and their blood-red flowers hide bulging fruity pouches beneath their petals. It had not been so picturesque all the time and during my last visit, Shiraz had been undergoing major construction work.

An ongoing Metro project had thrown the city traffic into a chaotic mess and hot dust had enveloped the city in a suffocating way. The dusty air had been less fragrant and the sky had worn a tired blue look. But even then, the delightful charm of Shiraz had been undeniable and after an initial shock, I had once again fallen back into its luxuriant ways. I had a whole week to spend in Shiraz and both of us had enjoyed the city in a most “lazy” way. Hot days had meant sleeping, gossiping and drinking huge amounts of doug (buttermilk) and evenings had taken us to the city’s innumerable young hangouts. We had also visited some of Shiraz’s highlights and frequented our favourite places together. The famous Bagh-e-Eram (Eram Gardens) and Jahanama Gardens had topped my favourite list and whenever in Shiraz had never missed an opportunity to go there.

A day out at a Eram Garden in Shiraz

The city of gardens

It goes without saying that Persians were connoisseurs of beauty and their love for nature is legendary. Eram and Jahanama had been epitomes of Persian love for nature and they had been beautiful in the most romantic way. Spaciously laid out with tree-lined pathways, flower beds and blue hazy hills looming in the distance, they had been simply magical. I am particularly fond of Eram and must have walked down its cypress shaded pathways at least a dozen times. The old trees (some of them even a hundred years old), sour orange trees were heavy with blossoms and flowers spilling out mirthfully from the neat decorative beds, had always given me a natural high and then there had been the addictive Shirazi fragrant breeze. Built in mid 19th century, the World Heritage Site of Eram also had Hafez’s poems engraved on its tiles and a small photogenic museum that had reflected on the water of the dancing fountains. The building itself had been very interesting, with water channel weaving through marble floors, hand-painted gilt ceilings and it had been surrounded by thick rose bushes. It had housed a semi-interesting gemology collection and had provided cool shade on a hot summer noon.

Persepolis is an amazing day trip from Shiraz

The ancient Vakil market and bathhouse

Jahanama had none of Eram’s grandeur and it had been more tranquil, small and gave out a very intimate feeling. It had been a sharp contrast to the amazing Vakil complex, which too had been one of our favourites and after the tranquillity of the gardens, the fortified city had always felt like a tunnel bursting with life. Famous for Iran’s finest and most famous Vakil Bazar, the beautifully restored complex had seemed like a mini fortified city within the city. It had stunning algebraic patterns on its exterior and had wonderful 19th-century mosaic murals, especially one of Rostam overcoming the demon, decorating its main gate. Built during the Zand dynasty rule, when Shiraz had been the capital, the complex had included Vakil citadel, Vakil Bazaar and Baths. Prettily surrounded by flower beds and deep green cypresses it had been a favourite spot for siesta lovers and every afternoon the cool gardens had attracted nappers in hordes. The entire complex had been quite large and it had been ancient Shiraz’s important trading district. High vaulted, covered brick avenues had held several bazaars over the years and the architecture had cleverly kept maintained the interior temperature. Hot in winter and cold in summer, the atmospheric bazaar had trilled with shoppers all the time and its most sought after product had been Iran’s famous Gabbeh rugs (woven by Fars nomads).

The pink mosque of Shiraz

My Shirazi evenings had always concluded at Nasir al-Molk Mosque and there could not have been a more beautiful place to wrap up a day in the city of roses. Famously known as the Pink Mosque, the interiors of the seemingly sedate house of religion had been bewitching. Deep rose coloured exquisite Persian tiles had covered its every inch and honeycombed doorways had been beautiful little rainbow webs. Built during the Qajar era in 1876, the highlight of Nasir-al-Molk had been its stunning stained glass windows, an uncommon feature in mosque architecture. It had been built to capture the morning light and throw it on the tightly woven Persian carpet, like a million butterflies and the whole effect is nothing short of heavenly. I had never managed to be there in the morning, but the fading afternoon light had been stunning too. Soft light had peeped through the famous jewel-coloured windows and I had loved sitting inside a land of rainbows. I had spent many long hours there and my favourite pastime had been to silently watch the stained glass kaleidoscope leaving patterns on my silhouette.

During those long Nasir-al-Molk Mosque hours, I had always watched the time on my body and how the sunset was on my skin. Twilight would always make the rainbows vanish and deepen my colour into shadows when violet evening prayer calls would make me hasten us back home. I am not a very religious person, but there’s something about Nasir-al-Molk Mosque which had made me pray to my god. In the famous words of Japanese photographer Koach, “Even if you are the world’s least religious person, you might feel your hands coming together in prayer naturally when you see the brilliance of this light. Perhaps the builders of this mosque wanted to show their “faith” through the morning light shining through this stained glass.”