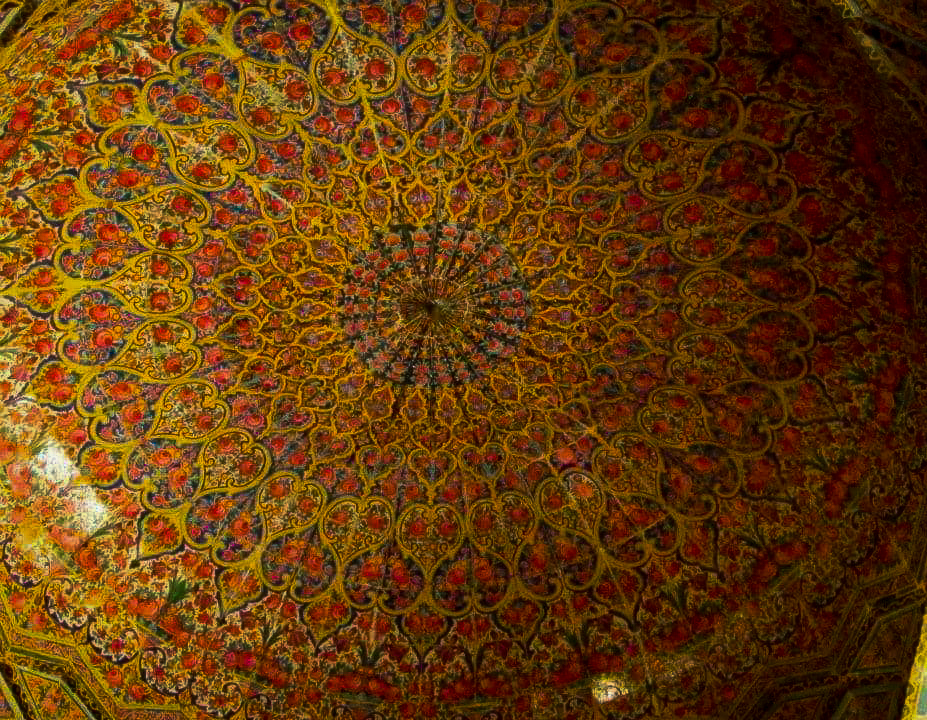 There is no better place to conclude evenings in Shiraz than the lovely Nasir al-Molk Mosque. Famously known as the Pink Mosque, the interiors of this house of worship are simply bewitching. Deep rose coloured exquisite Persian tiles cover every inch and honeycombed doorways create beautiful little rainbow webs. Built during the Qajar era in 1876 by Mirza Hasan Ali Nasir al Molk, this mosque was designed by the very talented Mohammad Hasan e Memaar. It is believed that the mosque took 12 years to complete and the end result is simply jaw-dropping. The highlight of this mosque is its stunning stained glass windows, an uncommon feature in mosque architecture. The windows were built to capture the morning light and throw it on the tightly woven Persian carpet, like a million butterflies and the whole effect is nothing short of heavenly. Although I have never managed to be there in the mornings, I found the interiors to be very captivating in the fading afternoon light too.

Nasir al-Molk Mosque is a land of rainbows

Soft daylight peep through the famous jewel coloured windows and I loved sitting inside the land of rainbows. I have spent many long hours there and my favourite pastime was to silently watch the stained glass kaleidoscope leave patterns on my silhouette. During those long Nasir-al-Molk Mosque hours, I counted time on my body by the way the rainbow colours deepened/faded on my skin. I always knew it was time to go home when twilight made the rainbows vanish and evening prayer calls rang through the violet sky. I am not a religious person, but there’s something about Nasir-al-Molk Mosque which made me pray to my god.

One of the most beautiful mosques in the world

In the famous words of Japanese photographer Koach, “Even if you are the world’s least religious person, you might feel your hands coming together in prayer naturally when you see the brilliance of this light. Perhaps the builders of this mosque wanted to show their “faith” through the morning light shining through this stained glass.” No doubt, it is one of the most photographed mosques in the world and a crown architectural jewel of Iran. The mosque attracts visitors early in the morning and the time frame from 9 am to 11 am is best for capturing this gorgeous play of colours. Interestingly, despite being so delicately beautiful and in the gorgeous shade of rose pink, the Nasir-al-Molk Mosque has survived many earthquakes and the secret behind this survival is the use of flexible wooden bricks within the walls. The rose-pink floral tiles are simply irresistible and a signature feature of Shiraz. Recently, the Nasir-al-Molk Mosque is being lit up at night as well so that the light passes through the coloured glasses and spills into the yard and all over the mosque.

Recommended Read: IS IBN TULUN MOSQUE THE MOST BEAUTIFUL ONE IN CAIRO?

The architectural beauty of the pink mosque of Shiraz