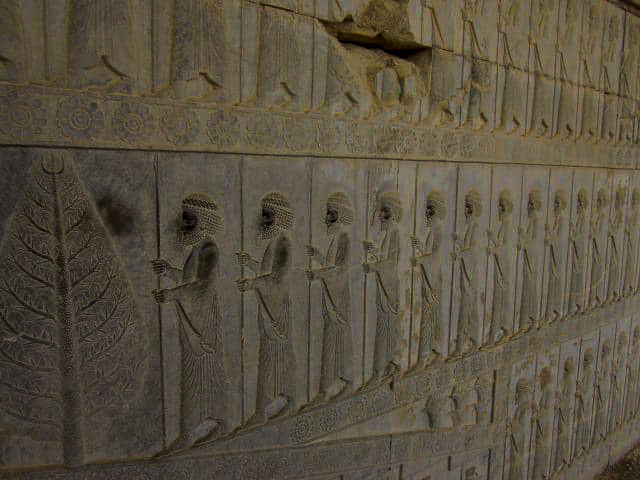 The most beautiful Shiraz attractions

The scent of orange blossoms, flowers growing in profusion everywhere, vibrant cafe, and a young hip culture: it is hard not to love this southwestern Iranian city. There are plenty of Shiraz attractions that will easily fill 2-3 days. The city itself is filled with beautiful mosques, markets, tombs, and gardens. Then there are the surrounding big wig archaeological hotspots like Persepolis, and Pasargadae to explore. However, if you want to relish the real flavour of this cultural hotspot, then spend at least a week in Iran’s most liberal city, mingle with the locals, and I guarantee that you will not want to leave. In this post, I will mention the most beautiful Shiraz attractions with a brief travel guide at the end. These will help you prepare for your Shiraz travel even if it may be armchair traveling.

Also spelled as Nasir ol Molk Mosque, this 19th-century Qajar Dynasty building is an architectural masterpiece. Popularly known as the Pink Mosque of Shiraz, it is perhaps the most photographed monument in Iran. Its beauty lies in its stained glass windows that come alive in direct sunlight. The ray filtering through the coloured glass creates the most dramatic reflections on the interiors and this is truly a gorgeous sight. The best time to photograph this delightful play of light and colours is early morning, especially during winter and autumn. However, note that there might be a queue to witness and photograph this light. Apart from the stained glass, this mosque is also famous for its incredible pink floral mosaics. They fill every inch of this mosque thus rendering the name – Pink Mosque. The entrance fee is 200,000 IRR and the opening hours are from 7 am – 5 pm every day. This mosque is closed on Iranian public holidays.

This is one of the best combinations of Shiraz attractions. This impressive mosque is composed of a vast courtyard, a praying hall with 48 columns, exquisite mosaics, and tiled portals. Built during the 18th century, between 1750 and 1773, this mosque was constructed by the Zand dynasty and renovated by the Qajars. It is most beautiful during sunset and there is sometimes a bit of a queue at that time. The Vakil bazaar is located next to the Vakil Mosque. This is one of the oldest bazaars in Iran and even in the world. Established in the 11th- century, Vakil Bazaar is a photographer’s delight. Follow the footsteps of thousands before you, tread down 11th-century old narrow lanes, shop for spices or handicrafts, and gaze at some of the beautiful traditional Shiraz carpets (kilim rug). Make sure to stop at one of the Vakil bathhouses or simply soak up the atmosphere. This is a free attraction and the opening hours are every day from 9 am – 12 pm and 4 pm – 7 pm. The entrance fee of Vakil Mosque is 100,000 IRR and the opening hours are from 8 am – 8 pm.

Eram Garden, the most heavenly of Shiraz attractions

There is only one word that does justice to this magnificent UNESCO World Heritage Site and that is heavenly. Built by the Seljuk dynasty kings, this is one of the nine Persian gardens. Also known as the Bagh-e Eram, this garden has beautiful flowers, tall cypresses, fountains, and a 3,000 years old tree. Eram Garden is not just a pretty place. It is also a great example of a traditional Islamic garden, with pavilions just as beautiful as the gardens themselves, and with tiles that are inscribed with poems from the famous poet Hafez. The opening hours are 8 AM – 7 PM every day and the entrance fee is 250,000 IRR.

Naranjestan garden belongs to the Qavam House complex. The Qavam House is a historical house and an example of how wealthy Iranian families used to live in Shiraz in the 19th century. Today this building is a museum (that is pretty avoidable). The garden, however, is one of the prettiest in Iran. The entrance fee is 150,000 IRR.

A day out at a garden in Shiraz

This is the most important religious shrine of Shiraz. It is a funerary monument and here rests two brothers of Imam Reza, a Shia Imam who is buried in Mashad, the holiest city in Iran. This pilgrimage site is open for non-Muslims, however, a tour guide is mandatory. Women must cover themselves with a chador and these are available at the monument gate. The interiors of this mosque are spectacular with some great mirror work that dazzles. There is no entrance fee.

Popularly known as the Arg-e Karim Kham, the citadel of Karim Khan-e Zand was built like a fortress. Today, the building hosts a museum that is completely avoidable. Go there in the evenings to see the young Shirazis hang around the beautiful, tall walls and soak in some local atmosphere. The entrance fee is 200,000 IRR and this includes the museum and the opening hours are from 9 am – 10 pm every day.

Shiraz has some beautifully restored historic houses. These are great examples of local architecture and how the rich Shirazis lived in the olden times. The Qavam House is one of the most famous ones. Others include the Shapouri house located in the old quarters of Shiraz, Zinat Al-Moluk House of the Qajar Era, and the Manteghi Nezad House.

The Tombs of Hafez and Sa’di

The famous poet Hafez (14th century) is buried in Shiraz. His marble tomb is located in the Musalla Gardens and consists of an open pavillion. It was built in 1935 and is situated on the site of previous structures built during the 18th century. The tomb of the poet Sa’di is also located in Shiraz. This marble octagonal-shaped building dates from the 1860s and has the tiles of its walls inscribed with Saadi’s poems in tile. Sa’di was not just a famous poet. He was also a 13th-century mystic who is as famous for his verses as his social thoughts. The following poem of Saadi is inscribed at the entrance to the Hall of Nations of the UN building in New York:

Of One Essence is the Human Race,
Thusly has Creation put the Base.
One Limb impacted is sufficient,
For all Others to feel the Mace.
The Unconcerned with Others’ Plight,
Are but Brutes with Human Face.

Shiraz attractions that are day trips

No list of Shiraz attractions is complete without a mention of Persepolis. Many consider it as the highlight of Shiraz attractions. Founded by King Darius the Great in 518 BC, Persepolis was the ceremonial capital of the Achaemenid Empire in the 7th century B.C. At that time, the Persian Empire was the greatest in the world, and Persepolis was sycophantically called the center of the world in that century. Today, the ancient site is a UNESCO World Heritage Site. The site is rather impressive despite its ruined conditions and the best way to enjoy it is with an experienced guide who can tell you the stories behind each stone. This important archaeological site is undergoing renovation in some parts. The rest of the complex is still magnificent given the age and the destruction from Alexander the Great’s army. Of noticeable importance are the famous stairwell, the upper tombs, and the different cuneiform inscriptions. Persepolis is massive so make sure to dedicate several hours to a good half-day for exploring the area. It is also 70 kilometers away from Shiraz next to a city called Marvdasht. A one-way taxi costs around 10 USD and there’s no need to keep the taxi waiting. A return taxi is easily available at the exit. For more detailed information read this excellent guide on how to visit Persepolis. The entrance fee is 200,000 IRR and the fee for the Persepolis Museum is an additional 200,000 IRR. The opening hours are from 8 am – 5:30 pm and plan for at least half a day visit.

Persepolis is an amazing day trip from Shiraz

Qalat Village – This hilly quaint village is tucked away in the woods outside Shiraz. It is a perfect day trip for those who are seeking nature and a bit of a getaway from all that archaeological grandeur. This is a favourite weekend spot for local Shirazis and I loved it there. You can read about it here.