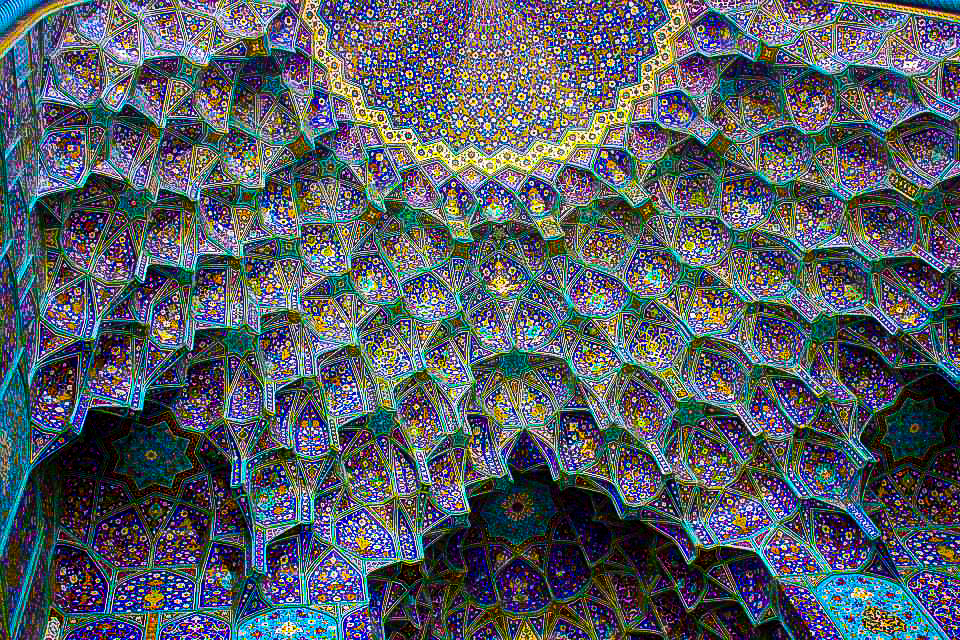 Naqsh-e-Jahan square of Esfahan in Iran

I have visited the city called “Half of the World” thrice and each time, I have been bedazzled by Esfahan’s Naqsh-e-Jahan square. Throughout centuries, travelers have claimed Esfahan to be one of the loveliest places they have ever seen. Even the well-seasoned Ibn Battuta left glowing reviews of Esfahan attractions and the Naqsh-e-Jahan square is indeed home to some of the most splendid mosques in the world.

The blue gold beauty of the Sheikh Lotfollah Mosque

The highlight of Esfahan attractions is the Naqsh-e-Jahan square and it is equal parts a magnificent site and a complete tourist trap. A Unesco World Heritage Site, Naqsh-e-Jahan is famous for impressive mosques, palaces, and bazaars and its sheer size and grandeur never fails to mesmerize. Though the Imam Mosque dominates the square, my favourite is the Sheikh Lotfollah Mosque. Exquisite and intimate, it used to be the private mosque of the Safavid dynasty rulers. Sheikh Lotfollah Mosque is one place that makes you feel happily blue and Esfahan’s tile work decorating it is famously aqua toned. More lovingly embellished than the towering Imam Mosque, I love watching light filtering through its blue tiles and trellises. The central golden peacock dome is simply breathtaking and it is easy to lose hours counting time on its splendid sundial. Lotfollah’s beauty is easy, unassuming, and mortal in temperament. Unlike the massive Shah mosque, its relaxed fluidity is like poetry and the beauty is warm and homey.

Under the Peacock Dome of Sheikh Lotfollah Mosque

Imam Mosque seems to dwarf even the Zagros Mountains

The massive congregational Imam mosque, however, is a completely different story. Its grandeur was designed to stun viewers. Despite its intimidating quality, Imam Mosque is one of the most magnificent monuments I have ever seen. The massive monument derives its power from its sheer size and powerful acoustic effect. Apart from being connoisseurs of beauty, ancient Persians were also clever architects and sound engineers, and the interiors of the Imam Mosque have the most resounding acoustic qualities. It adds depths to the cavernous interiors and everything, including the Zagros Mountains, seems small in comparison. This is indeed the crown jewel of Esfahan attractions

You may also like: The stunning Sultan Hassan Mosque of Cairo

One of my best memories of Esfahan attractions is that of the Imam Mosque at sunrise, with the Zagros Mountains misting in the background. The blue and gold decorated monument truly resembles the glittering dawn sky at that hour and the sight leaves one speechless. Imam Mosque, however, is spectacular throughout the day and I always feel drowned inside its infinite blue interiors. Richly covered with exquisite signature Esfahani “blue” tiles, the monument is a hypnotic mix of flowers, calligraphy, quotes from the Koran, and tall shadows. The highlight of the stunning Naqsh-e-Jahan Square, the massive congregational Mosque is an architectural gem and in olden times, the booming surround sound effect of the main dome helped the imam call the far-flung masses for their spiritual obeisance. There’s a very popular quote that goes like this, “It is better to see something once than to hear about it a thousand times”. This is especially true when it comes to Esfahan, the city called the “Half of the World”.

Built at the beginning of the 17th century by emperor Shah Abbas I the Great, Naqsh-e-Jahan Square of Esfahan is a UNESCO Heritage Site. It is bordered on all sides by astonishingly beautiful monuments which are linked by two-storeyed arcades. The square is famous for some of the most beautiful mosques in the world namely the Imam Mosque and the Sheikh Lotfollah Mosque. It has also the magnificent Portico of Qaysariyyeh and the 15th-century Timurid palace. These are all fantastic examples of the art and culture in Persia under the Safavid rule.

You may also like: Is Ibn Tulun the most beautiful mosque of Cairo?

By Metro – The closest metro station is Takhti and it is a 20-minutes walk from the mosque.

By Bus: Hop on a bus that passes either one of these stops – Central Library and Khorshid Hospital.

Though the square is open 24/7, the best time to visit is just before sunset. Plan your visit to the Ali Qapu Palace between 9.00 and 18.30. Opening hours of the mosques are based on a praying schedule and differ from season to season.

Things to Do at Naqsh-e Jahan Square:

The Naqsh-e-Jahan Square of Esfahan is a must-visit attraction. This is one of the biggest squares in the world. Filled with fountains and green lawns, souvenirs shops, and ice-cream places, it is a very pretty and pedestrian-only place. You can take a horse ride around the square or enjoy a walk there at sunset. Alternatively, look around or shop for Persian carpets, copper, enamel, calico, and miniatures at the handicraft shops of the square. Try traditional Iranian cuisine in Azadegan café, which has a gorgeous interior.