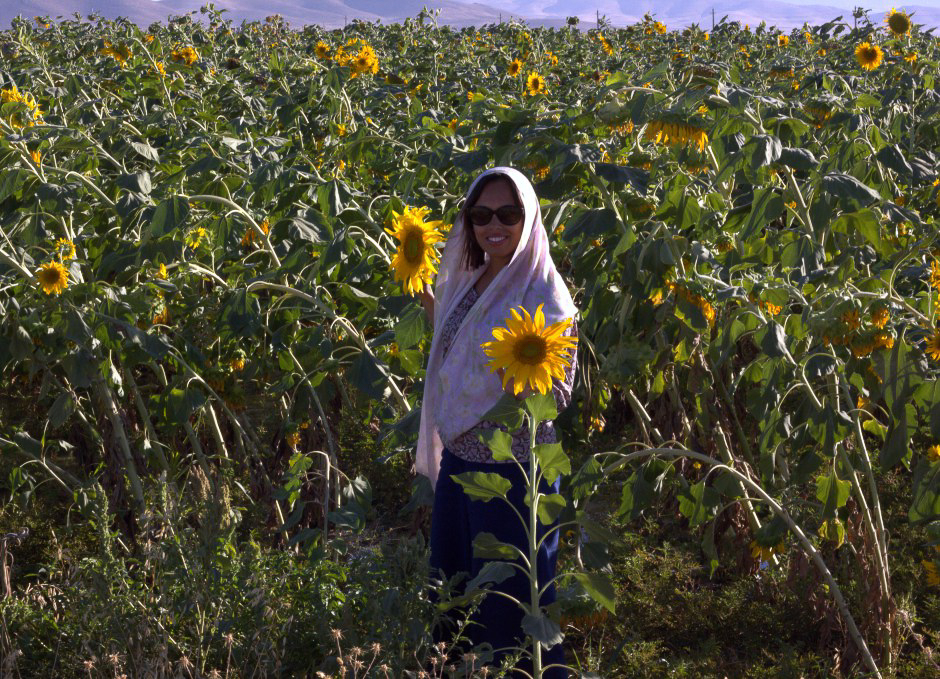 A drive through west Iran

We left Abyaneh at sunset and resumed our drive. We were slowly inching towards west Iran and were on our way to Kashan, a beautiful city set on the first oasis on the Qom-Kerman road which edges along with the central deserts. It should have been a beautiful drive. However, in reality, the onward journey to Kashan turned out to be more hellish. For some annoying reason, Ashkan, my local Iranian driver had a habit of not calling the hotels beforehand for their exact location. I suppose he enjoyed cruising around a new place at a leisurely pace and took pleasure in trying to hunt down addresses in cities, he had never been before. This would have been alright if the rest of the day would have been uneventful. However, after our Abyaneh fiasco, our already exhausting day just stretched longer. Finally, a grumpy growl from me, made him call the very beautiful Ehsan traditional guest house for directions and by the time we reached, I was too tired to enjoy its restored heritage beauty.

The sights and feel of Kashan

Kashan is one of the most interesting cities in Iran and strangely one of the most overlooked ones as well. Not many foreign tourists visiting Iran come so far and thus, they miss out on the beauty of Kashan’s timeless winding covered alleys, beautifully restored old houses, and the rose festival. Despite my visit, I too missed most of Kashan’s glory and that made my mood get even worse. Kashan was at the top of my bucket list in this west Iran road trip and our late arrival made me lose out on the desert sunset. However, my first sight of Kashan that night was unforgettable and the city looked like sparkling diamonds scattered across the dark Qom-Kerman highway. I saw it once again the next morning, just before we resumed our west Iran drive, and the city’s interesting old building, exquisite rose gardens, and unique cavernous mud brick streets charmed me. Even though I had only a few glimpses, I fell in love with Kashan at first sight and found resembling something from the Arabian Nights. Kashan’s old covered terracotta alleys were simply gorgeous. They twisted in and out from the main road, opening up in surprising little squares before writhing deeper into the city.

To continue or not continue with my west Iran road trip

Although my Kashan stay was extremely short, its Ehsan Guest House provided me with the best hospitality I  experienced on that west Iran road trip. An old Iranian traditional house, the guesthouse had beautiful pomegranate trees, a fountain-filled courtyard, and carpeted seats running along indoor streams. It was an oasis of hushed peaceful silence and was the perfect place to soothe our jagged nerves. After the long day, sitting by the indoor pool, under the red pomegranate blossoms was very relaxing and I found it difficult to leave Kashan the next morning. Ashkan’s dubious navigational skills, our language barrier, and the prospect of a tediously long road trip through west Iran suddenly overwhelmed me and I seriously considered giving up the journey. Ironically, the language barrier proved to be detrimental in our “change of plans” communication and soon Ashkan and I were back on the Iranian highway on full throttle.

Back on the highway near west Iran

Kermanshah, the jewel of west Iran

Our next destination, Kermanshah was located in extreme west Iran. In fact, it was closer to Iraq than Esfahan and was known to be a politically sensitive area. Known for breathtaking beauty, controversy, and internal separatist rifts, Kermanshah was quite far and we had another long drive ahead of us. The drive however was spectacularly beautiful and it took me to the deepest, I had ever gone into the Iranian hinterland. Incidentally, Kermanshah is one place, where even a lot of Iranians don’t go and so that stretch of our drive was solitary. Most of the time, ours was the only vehicle on the lonesome shimmering highway and the endless tracts of grapes, sour orange, pomegranate, walnut, and sunflower fields spread far for our eyes only. It was the food bowl region of West Iran and since we were there during the fruit ripening time, the air was heavy with a sweet fragrance. The sun too was pleasantly warm and the ripening fruits attracted bees in hordes. Surprised farm hands paused their work to stare at us in open-mouthed amazement and I found their shouts of greeting, to be very touching. Nothing beats the travel joy of experiencing a country’s rustic charm and road trips are custom made for that pleasure.

My love for road trips goes a long way and the beauty of the Iranian highways sealed that addiction forever. Lively and always teeming with people, the Iranian highways resemble a long cross-country marketplace, where vendors peddled colourful local products at every pit stop. The landscape in most parts looked lush and the highway passed through huge acres of smiling sunflowers, green curling vineyards, dark elegant cypresses, and quaint villages. Obscurity was the highlight of that west Iran trip and very rarely had I felt so happily lost in the middle of nowhere. Strange, often bizarre (to my foreign eyes) sights tumbled out of nowhere and they revealed funny details of some of Iran’s cultural quirks. During that time, the whole country was having a bountiful fruit harvest and the highway was filled with farmers selling them from the back of pickup trucks. There were grapes being sold in box fulls, pumpkins in hay baskets, and jars of pickled olives.

Grapes for sale on the highway in west Iran

Olives seemed to grow there in abundance and olive groves lined the highway for a long time. Needless to say, it was the most beautiful part of the drive, and even though, we were on the road the whole day, I was in no rush to reach my destination. Kermanshah arrived sometimes during the early evening and I felt the palpable tension of the place immediately upon arrival. A lush, beautiful Kurdish region, the province’s heavy military presence felt disturbing and the posters of punishments being meted out to the rebels curdled my blood cold. There were guns and uniforms at every second step and the constant verification of my passport dragged the last bit of our drive. Dusk fell fast in Kermanshah and my day’s exhaustion made me give the historical Bisitun complex a miss. Even at that time, I knew missing out on Bisitun was a travel mistake, but maturity taught me to give priority to my wellbeing first. In fact, this trend of taking it easy, leaving out attractions when body or mind was exhausted and not regretting missing out my wishlist in a place, started from that west Iran road trip and it was an important lesson learned. My hotel in Kermanshah was the lovely Parsian hotel and it was the second-best hotel I experienced on that trip.

Preparing for my Oramanat mountain trip

With my feet up on the ottoman and a cup of tea in my hands, I watched Kermanshah from my window and wondered at the sensibility of my plan of going into the formidable Ormanat mountains the next day. I also wondered if Kermanshah was worth all the trouble and for the first time, felt too far from home to be comfortable. It was on very rare occasions, that my solo woman traveler’s status bothered me, and that night, sleep was difficult.

Apart from indulging in the sights and sounds of Kashan, do keep a lookout for the unique festival of Rose and Rose Water, held every mid-May. Kashan and the surrounding Ghamsar areas produce the world’s finest rosewater and the roses used in them are none other than the very best locally grown Damask or Mohammadi Rose. The festival is a traditional yearly ceremony of Kashan and it is an absolute photographer’s delight. Do indulge in a bottle of Ghamsar rose water in Kashan and enjoy sorting the Damask rose petals with the locals during the festival. It is a treat for fragrance and rose connoisseurs and not to be missed by nature lovers. Ehsan Guest House is a wonderful traditional b&b in Kashan and their dish of chicken with berries is to die for. Succulent, tender chicken cooked in barberry sauce, the drool-worthy dish is served with pomegranate rice and a smattering of whole berries. It just melts in your mouth and is guaranteed to be an unforgettable meal.

Pumpkin and grapes – farm to table concept on Iranian highways

A glimpse of the Bisotun complex in west Iran