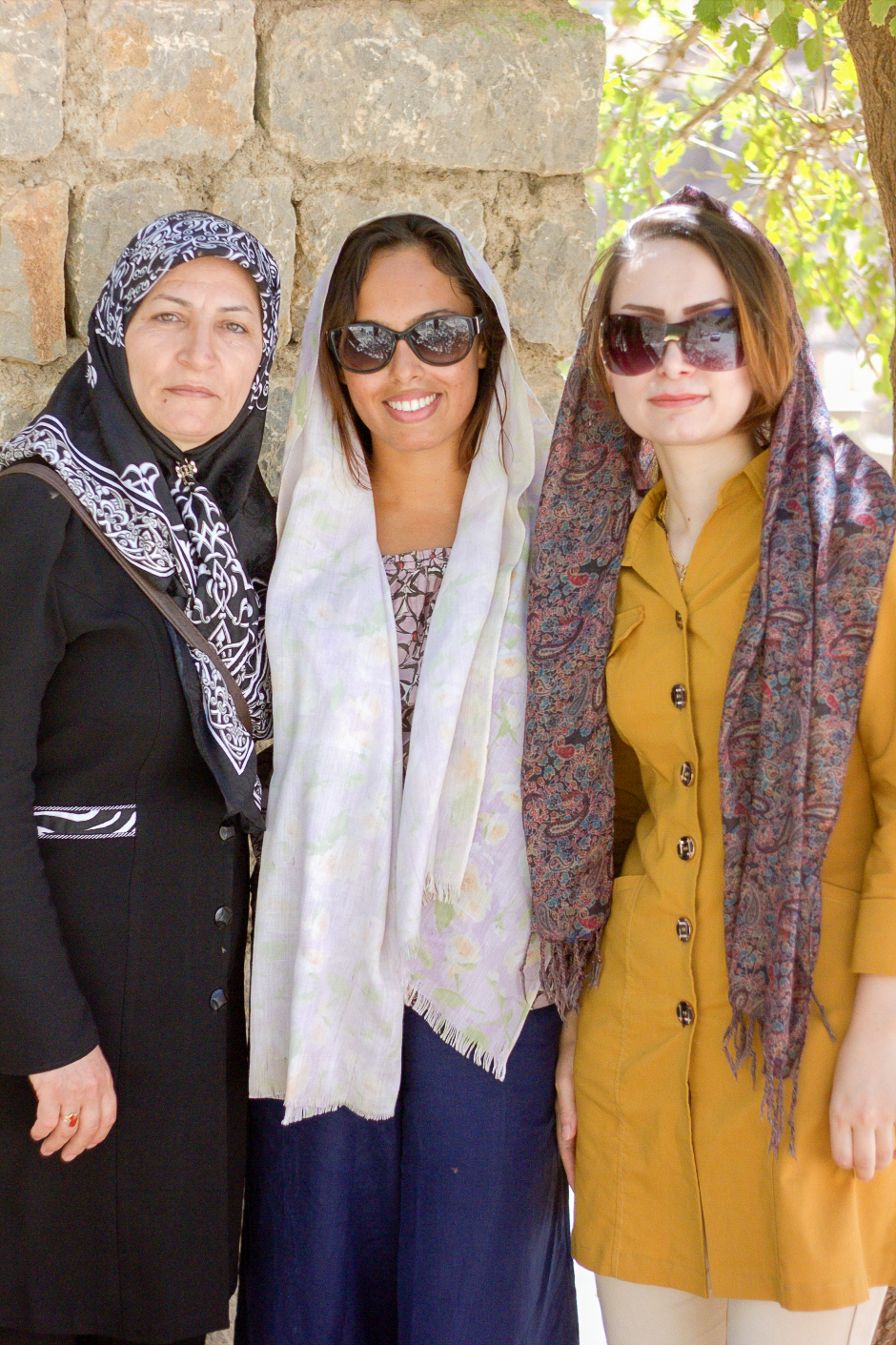 The difficulty of reaching Hajij took us unaware. We were not prepared for the Oramant mountains and it shook us to the core. After crossing a few tunnels in various stages of construction, we stopped by a trickling mountain stream to refresh our parched throats and discuss our next plan of action. The car air conditioning stopped working somewhere in Abyaneh and no amount of mechanical cajoling by Ashkan could not revive it. However, owing to more pressing issues at hand, the most important being finding our way out to Hajij, the thought of bodily discomfort did not even cross our minds.

The drive to Hajij took us through these mountains

Hajij continued to elude us and we sat down by the broken road, holding our heads in our hands. No sign of life was visible in that stark mountainous landscape and even for locals like the Taherians, it was turning out to be a nightmare. Mobile phone connections stopped working somewhere near Paveh and we were stuck in the Oramanat mountains without connectivity, map, directions, or a backup plan. The main road which led to the village was closed off for construction and while hunting for an alternative exit, we lost our way. We had no idea how to reach Hajij and all around us the stony mountains stood rugged and silent.

A pilgrimage site of Kermanshah

Renowned throughout Kermanshah as an important pilgrimage site, Hajij village was supposedly very picturesque.  Constructed in a terrace-like pattern on the mountain slopes, the roof of each house formed the front yard of the residence above. The pretty village housed a mountain spring, which was famous as the best aqua mineral in the country. Stunningly beautiful, holy, and timeless, Hajij seemed ethereal and at that moment, to us, it seemed like a dangerous mirage to chase. All these thoughts and visions ran through my head, as we sat by the broken road when help came to us in form of a migrating family from Hajij.  Exhausted, dispirited, and coated in layers of dust, we made such a sorry picture, that the family had actually stopped their car just to inquire us about our well-being.

Ashkan and the Taherians immediately launched our sorry saga and the family stood shell shocked, upon hearing that we were on our way to Hajij, the village they had just abandoned. The village was their home for generations until that day and much to our surprise, we found out that there was a series of villages named Hajij. The new discovery added to our misery as we had no idea of which Hajij we wanted to visit. According to the migrating family, all the villages named Hajij were razed to the ground to make way for the brand new dam. Nearly all the historical villages were reduced to rubble and they were abandoned by the resident families who were migrating to nearby towns. The remaining ones moved into the new constructions, located higher up in the mountains, and with their heartbreaking narration, my fantastic dream of visiting Hajij crashed badly.

With the new revelation, our day took a worse turn and we still had no directions, food, or connectivity. The Oramanat mountains and the bright blue skies glared with a harsh brilliance and it was very, very hot. The closest Hajij village was just one more tunnel away and we half-heartedly dragged ourselves towards it. It was late noon and our bellies rumbled from lack of food. Lunch was some hours ago and apart from some water, we had not had any nourishment since. The nearest town was three hours away and we hoped to get food, directions, and rest at the village. The so-called abandoned village of Hajij emerged right after we crossed the tunnel and our hopes soared at the first sight. A brown stony village had clung to the slopes of a mountain and we spotted clothes drying on rooftops.

Hajij was a sight for sore eyes

To our little team inside the car, it was the most beautiful sight and although the village consisted of mostly newly constructed houses, it looked lived-in. Hajij was also pretty. Surrounded by lush green forests, to our tired eyes, it was a welcoming oasis of life.  Construction and consecutive migration left their ugly scars and a great amount of rubble was piled at its base. However, the cheerful sight of fluttering clotheslines and laughing children playing hopscotch animated the entire scene and we rushed towards the village with a huge sense of relief. Incidentally, Hajij residents spotted us even before we sighted them and they rushed up to our car the moment we reached there. Curious elders crowded us with endless questions and the shy children stared at us with open-mouthed amazement. Unfamiliar with foreign tourists, they swooned over my nationality (owing to Bollywood) and welcomed us to their homes, singing excerpts of Bollywood songs.

Bollywood near the Iran-Iraq border

Once again, I was amazed by the reach of Bollywood and on that day, among the bunch of hardy Kurdish people of Oramanat, India’s iconic industry left me humbled. Hajij residents were one of the friendliest people, I have ever met during my travels and they opened up their homes, hearts, history, and culture to my curious foreign eyes. They provided us with the famous Hajij flatbread, places to rest, and later took us for walks around their village. Life in the Oramanat mountains was hard and along with the climate, political controversies also rocked their lives from time to time. The construction of the dam was yet another adjustment, that they had to make, and despite being, bereft of their heritage and heirlooms, those Hajij folks clung to their land possessively.

Life in the Oramanat mountains

They were technically been in the middle of nowhere and in that obscure wilderness, schools were hard to get. University and higher education for them seemed like impossible dreams and even the nearest hospital was a few hours away. Despite having so little, their happy adulation came as a beautiful shock to me and it felt amazing to be thanked for just being their guest. They gossiped over tea like old friends and during our walks around the village, revealed their clans and their marital network to us. Deeply rooted in their customs, land, and families, their lives remained mostly unchanged through ages and they seemed as old as the mountains on which they lived.

All they had were pomegranates, figs, grapes, and sour oranges groves and the comfort of a village community that was as formidable as the Oramanat itself. We lingered there as long as daylight permitted and finally after taking (and getting photos taken) of all families in the village, slowly made our way back to Kermanshah. Armed with precise directions, the drive back was quicker and easier and we even had time for a few quintessential breaks before reaching the city. At Bahareh’s insistence, we stopped at a famous ice cream parlour to sample the local product and it was another strange pit stop. The quaint local ice cream shop stood in the middle of nowhere and the old walls were adorned with photos of wrestlers, Bollywood movie stars, and a large poster of peaceful, smiling Gandhi. Vintage Bollywood movie posters stared back at me and the whole ambiance was as surreal as possible.

“Travel is the only thing you buy, which makes you richer.”

The much-renowned ice cream came complete with heavy cream and dry fruits and the entire experience of gorging gooey, sticky rice puddingy dessert in a shop adorned with Bollywood, Gandhi, and wrestling posters in the middle of Kurdistan seemed straight out of a movie. As if on cue, a most spectacular sunset happened and I rushed outside to see the entire Oramanat get painted in deepest shades of pink and orange. Thus my strange Oramanat day ended on a beautiful note and it was a befitting finale of the whole roller coaster experience. Difficult, adventurous, eye-opening, and humbling, the Hajij village of Kurdistan was one of the most valuable experiences of my life and I gratefully counted my blessings. It is rightly said, “Travel is the only thing you buy, which makes you richer.”

A blue truck on a Iran highway

The Kurdish men of Kermanshah

A Kurdish woman somewhere in the Oramanat mountains

Our group photo at Hajij village