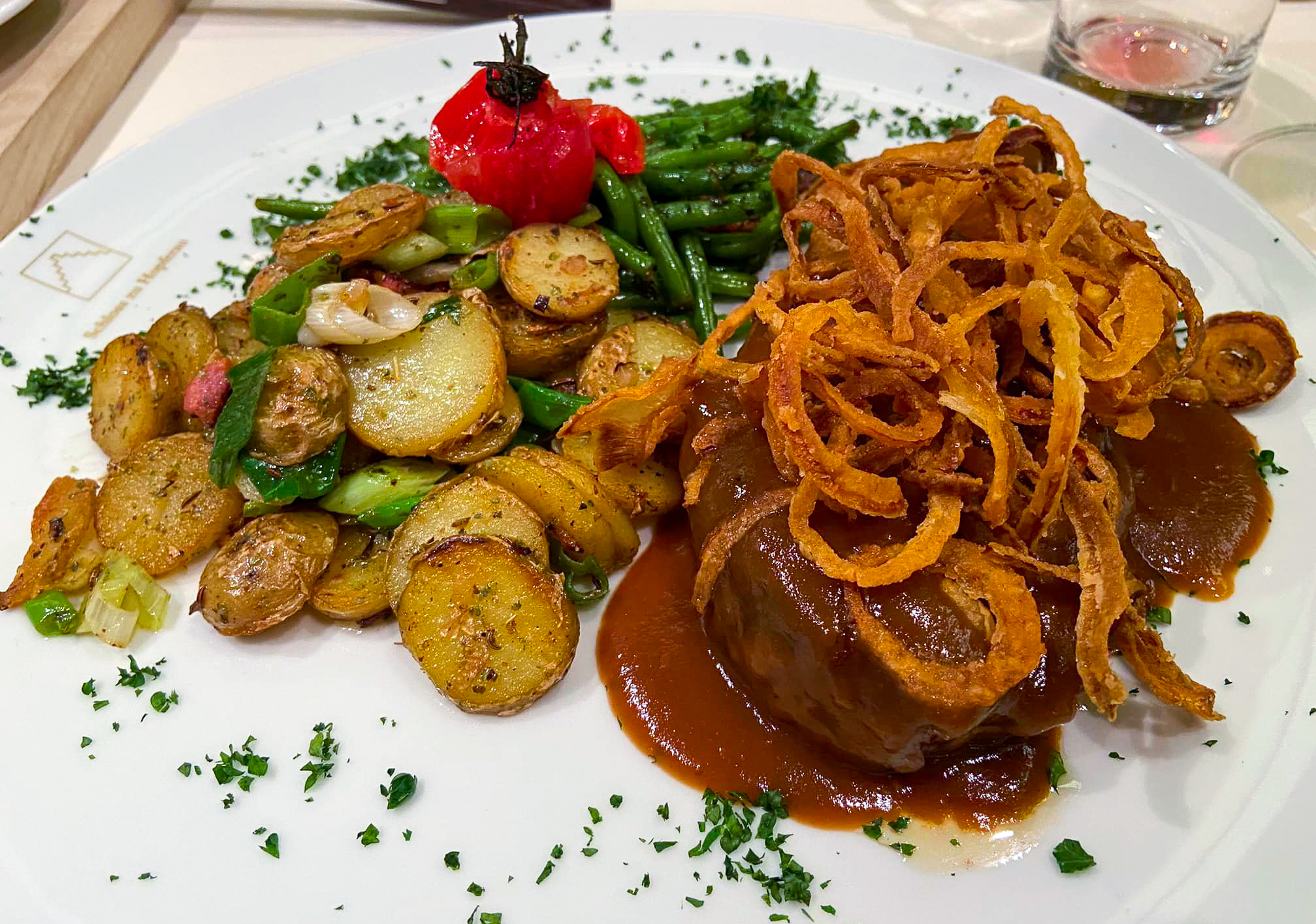 Bavarian dishes are meant for giants, peasants, and the mountain hale and hearty people. These dishes are monster trucks of fat, carbs, and proteins. Meat, dairy products, bread, and root vegetables form their base and these dishes are as wholesome as can be. There’s nothing fancy, light, or delicate about Bavarian dishes and their recipes are mostly handed down through generations of women folk in the family. Nearly every Bavarian recipe gives out the aroma of the farm and bears witness to the efforts of the hardworking wives of the alpine farmers to preserve fruits and meats for harsh winter months. Over generations, these women have mastered the art of preparing for adversities and they followed the ‘waste not, want not’ philosophy to the T.

Bavarian dishes are as hearty as the Alps

Thus Bavarian cuisine uses nearly every part of the slaughtered animal except hooves and horns, and even stale bread is not thrown away. They are used for making soups. Personally, I find the portions of Bavarian dishes to be too generous for even a hearty eater like me but then I am a small-sized person who leads a rather languid lifestyle. However, I guess, for a large, sturdy farmer who spent his days working hard on his alpine farm, the portions would be filling. I also find the Bavarian dishes or German cuisine, in general, favouring sour, tarty flavours and if there’s one taste that I cannot fathom, then it is the acidic sour flavour. Despite all these issues, I ate heartily during my winter holiday in Allgau. Nearly every day, I sampled different Bavarian dishes, and here are some of my favourite food.

Also called ‘eisbein,’ or ice leg, this dish consists of a slow-roasted pork knuckle served with the skin still on. The meat is marinated for days before being slow-cooked until tender. The whole pork knuckle is roasted for hours until it is thoroughly cooked and the skin becomes golden brown and crispy. This is then served with sauerkraut and potato dumplings. Schweinshaxe is probably the most famous of Bavarian dishes and it is commonly found in restaurants throughout the country and the region. It is also a quintessential Oktoberfest dish.

Schweinshaxe is one of the most popular Bavarian dishes

This is a traditional dish that is served in most German and Austrian restaurants in Bavaria and Vienna. It is made with a combination of beef, onions, flour, oil, butter, paprika, Dijon mustard, cream, beef stock, salt, and pepper. Onions are the stars of this dish rendering it the name – Zwiebel meaning onions. These are sliced into rings, dipped in a mixture of flour and paprika, fried in oil, and set aside. The steaks are then lightly pounded, seasoned with salt and pepper, coated with flour and paprika, fried in oil and butter on both sides, and removed from the pan.

Zweibelrostbraten, one of the most popular Bavarian dishes

Spätzle are typical Bavarian noodles made from a batter of eggs and flour with the help of a special grater. Käsespätzle is what the name suggests – Käse meaning cheese and Spätzle being noodles. It is a delicious dish made with layers of spätzle and grated cheese. It can be served with a variety of toppings such as fried onions.

Schweinebraten, the best of Bavarian dishes

Another meaty, hearty delicacy, Schweinebraten is a traditional German pork roast originating from Bavaria. It is usually prepared for Sunday lunches and consists of sliced pork roast that is served with homemade gravy, semmelknödel (bread dumplings), or potato dumplings, and either sauerkraut or rotkohl (red cabbage).

Semmelknödel, one of my favourite Bavarian dishes

These German bread dumplings–nutritious and convenient, Semmelknödel are one of the most versatile side dishes in traditional German cuisine. There are many varieties of semmelknödel, which come in various sizes, yet all have a recognizable round form and bread as the base ingredient. Traditionally Semmelknödel was made at home usually by Omas, German grandmothers. Sliced or diced bread pieces, which can be fried in oil, are usually soaked in plain milk to soften, then mixed with eggs to form a pliable, soft base. These bread dumplings are mixed with different spices and additional ingredients to form a myriad of flavorful varieties. Semmelknödel makes great side dishes.

The knödel is a typical Bavarian dumpling. Here, it is filled with powidl, a delicious plum sauce, and served with creamy pudding, vanilla sauce, and topped with poppy seeds.

Sweet steamed buns are a German specialty and should have a caramelized bottom and soft pillowy tops.

These tiny babies are classic Bavarian dishes. Cabbage doughnuts with bacon and roasted onion, and served with brown gravy, these are hearty, rich, and filling.