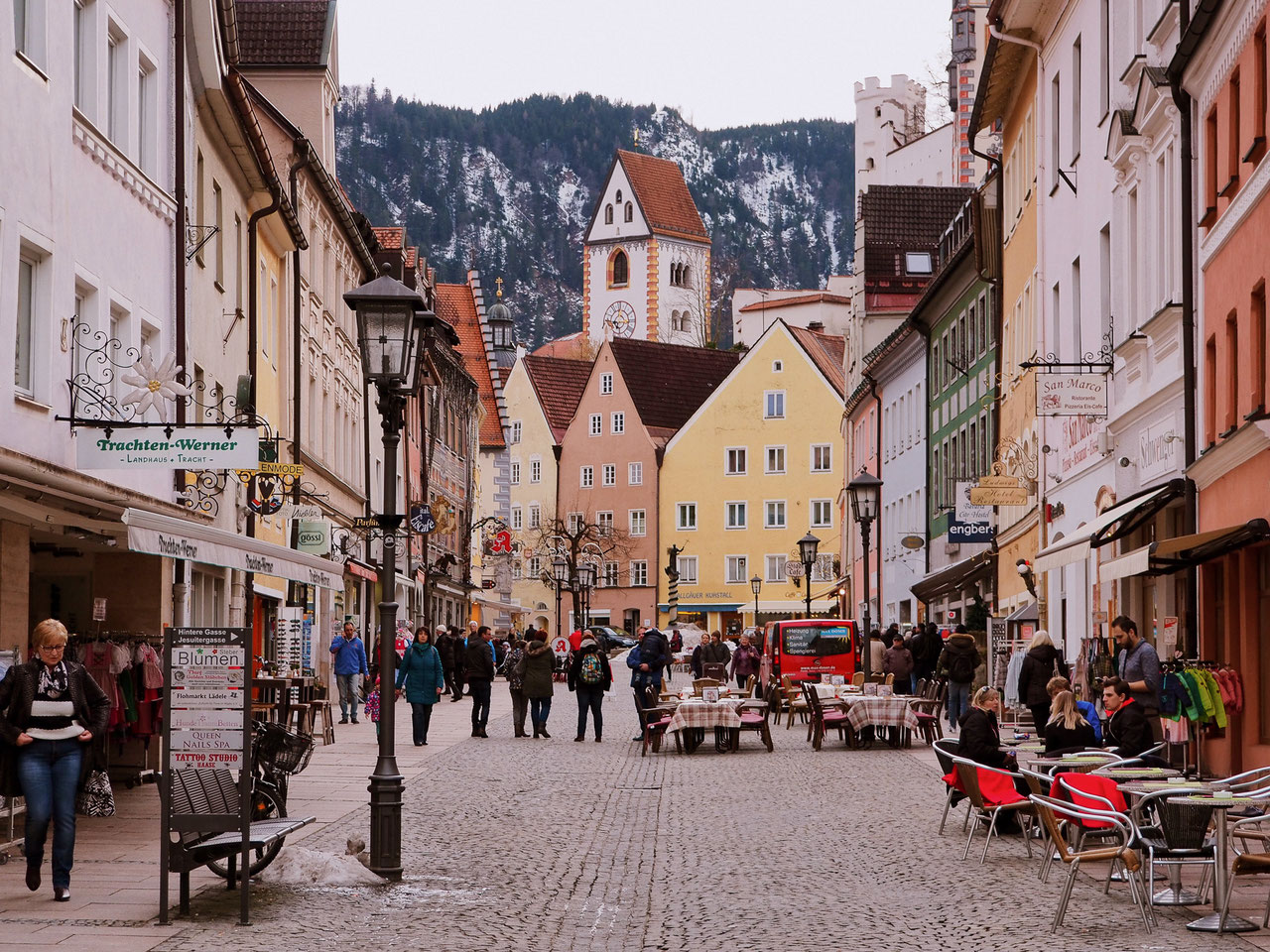 The Bavarian town of Füssen is as charming as it gets. It lies at the foot of the Alps and is the southern point of Germany’s famous Romantic Road. Since the nearby castles of Neuschwanstein and Hohenschwangau are the highlights of many German itineraries, it is no wonder that Füssen is extremely popular among travelers visiting the south of Germany. Although most people use it as a base to explore the fairytale castles of Ludwig II’s fame, Füssen has enough attractions to make its visitors linger longer than planned.

The colourful town of Füssen

The old town or the Altstadt is extremely pretty with a very interesting town hall and there are quite a few good Bavarian Brauhaus and restaurants. Füssen itself has a beautiful setting on the River Lech at the southwest end of the broad Forggensee. The Austrian border is close by and the town is crowned by the impressive buildings of the former Benedictine abbey of St Mang. Even though we did not stay at Füssen during our Allgau trip, we visited this town nearly every day. I loved strolling around the cobbled streets of the old town and people watching while enjoying a hearty regional dish.

The old town of Füssen

The heritage of Füssen

Füssen’s roots date back to the Roman era when a settlement developed on the Via Claudia Augusta, a road leading south to northern Italy and north to Augusta Vindelicum (now Augsburg), the former regional capital of the Roman province of Raetia. Füssen’s original name was “Foetes”, or “Foetibus”, which was derived from the Latin “Fauces”, meaning “gorge”, probably referring to the Lech Gorge. In the 8th century, the Swiss monk Magnus laid the foundation for the Benedictine Abbey St. Mang. At the end of the 11th century that the name Fuzin first appeared. It became later Fiessen or Füssen. This name probably referred to the town’s location at the foot of the mountain (Füße meaning “feet” in German). The town’s coat of arms has three feet and there are several local legends about the meaning of the three feet.

One of the oldest buildings of Füssen

Things to do in Füssen

In my opinion, it is a town that is definitely worth visiting, and here are ten fabulous things to do in Füssen.

The closest airport is Munich. From there, one can reach Füssen by bus and train.
By bus: 4 hours and around 15 EUR one way.
By train: 2 hours and around 22 EUR one way. It makes sense to buy a Bavarian Regional Card that allows you to travel by train in Bavaria as much as you want for a whole day for 25 EUR for the first passenger and only 3 EUR per additional passenger.

It should also be noted that you can get here on your own or in rented vehicles. In this case, it is worth using the A7 autobahn and the federal roads B310, B17, B16, and B179 (the latter comes from Austria).

Accommodation in Füssen is quite expensive and the luxury lovers can splurge on the famous Hirsch Hotel.