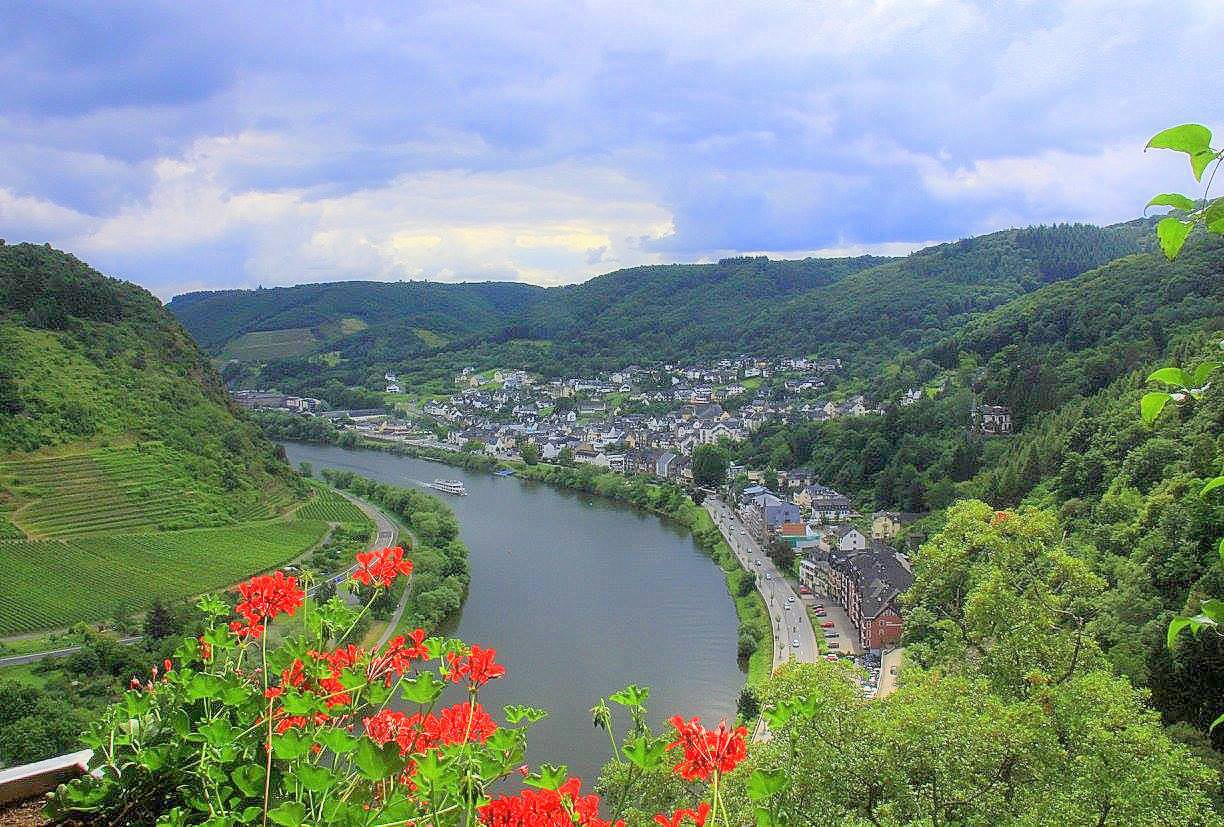 Following the Romantic wine route along the Moselle Valley

The Moselle Valley in Germany is as pretty as a storybook setting. The lively Moselle river meanders between hillside castles and neat rows of fields of wine-producing grapes and puffy clouds dot a clear blue sky. This is Germany’s landscape at its fairy tale prettiest and you almost imagine the princess in Sleeping Beauty peering at you from the turret of one of the castles overlooking the river. The forested hillsides alternating with craggy cliffs remind you of the seven dwarfs and the terraced vineyards exude romance which is almost magical. You feel as if you have stepped into a fairy tale when idyllic villages appear around each bend of the river and time stands still amongst their half-timbered houses and Gothic church steeples.

Call us crazy, but just a week before our son Akash was born, Tarek and I took a break and drove down the Romantic wine route along the Moselle Valley for a few days. It was meant to be a breather for taking our minds off from the discomforts of the end of the pregnancy and by that time, I had become too big for long distance excursions. Being restless souls, both of us found being pregnant to be quite tedious and so, on a clear Saturday morning in Cologne, after squeezing ourselves in the car, we headed towards the pretty Moselle Valley for a romantic break from the daily grind. While the end of the third trimester did not churn up the supposed romance, the getaway gave us some time off to relax before the rigorous schedule with a newborn set in.

You may also like: The stunning beauty of Aachen cathedral in Germany

The romantic valley along the Moselle is a wine lovers destination.

It was a beautiful day when we started for the Moselle Valley in Europe and the end of summer could be keenly felt. The month of August was at its glorious best and the sun had already begun mellowing down that year. The multitude of apple trees bore tiny greenish red fruits and the sky remained soft blue all the time. A constant mild breeze made the days balmy and the evenings were clearly starlit. The blazing hot days when the temperatures sweltered at 35 degrees were gone and the residual summer days pretended to be a preview of a glorious autumn. Only the wildflowers still bloomed riotously and the highways or the autobahns were bordered with masses of vivid yellow, white and violet. The lakes and the rivers remained warm enough to swim and the camping grounds were full of barbecue smoke. Summer was presenting its final show and the season had packed in maximum beauty for it to take a bow. The usually gorgeous Moselle Valley was predictably even more beautiful because of the season and this drew great crowds as well.

The crazy seasoned travelers in the romantic Moselle Valley

Visitors flocked from all over North Rhine Westphalia state and many of them arrived in campers from as far as Holland. This made the Moselle crowded with tourist barges and the roads snaking along its banks were choc a block full of cars. However, it was so beautiful that neither of us minded the crowd and we were happy to be out of the confinement of our house. The warm clear days brightened our moods and we sang to the radio while driving along the romantic Moselle Valley wine route. Having packed like seasoned travelers for any unexpected arrival, we had the hospital kit, medical insurance cards, gynecologist’s papers etc at our finger tips and there seemed nothing which could mar our last outing together as a couple.

It is a fairy tale pretty region steeped in terraced vineyards.

Today, being a year wiser and more experienced, both of us look back at our foolhardy impromptu babymoon with sheer disbelief, but secretly if possible, we would do it all over again. To begin with, the Moselle Valley gave us a lot of beautiful memories and it is a postcard-pretty place. Just being there among the vineyards, half timbered houses and cobbled streets make you feel as if you have stepped inside a postcard and the place is a wine lovers‘ delight. According to the legends, the rambling vineyards of the fertile valley were originally created to produce wine for the Roman legions who once occupied the region and till today, Roman antiquities are found scattered in the well-cultivated soil.

The fine Reislings and other wines of the Moselle Valley

In the present day, the Moselle River which starts from  France’s Vosges Mountains acts as the Luxembourg-German border before flowing into the mighty Rhine at Koblenz. The famed Route Du Vin of Europe or the Wine Road runs well into the Luxembourg side of the river and it is a great route for hiking and biking. All along this route, series of charmingly old fashioned villages border the river on both sides and each supposedly has its own microclimate, which produces the variety of grapes which are found there. Needless to say, the Moselle Valley is credited with a  lovely range of light, fruity, flavorful white wines and its signature product is the cremant, a dry sparkling wine similar to champagne.

The romantic Moselle Valley is riddled with medieval castles along the river.

Be a Bacchus at the Moselle Valley

Wine-tasting is a popular activity in the Moselle Valley and its vintner charms do not end there. The Roter-Weinbergs-Pfirsich Likör, a cordial made from small, tart “red peaches” unique to the Moselle Valley, is also a culinary highlight of the region and it holds some of Germany‘s best wine festivals. Though largely overshadowed by beer celebrations like Munich‘s Oktoberfest, German wine festivals are great ways to enjoy the region‘s bounty and every town along the Moselle Valley hosts its own wine fest. Every year, throughout the summer weekends and during the fall harvest, Moselle Valley towns reverberate with joy as wine celebrations begin with live music bands, colorful costumes, good food, wine, and dancing.

Traveling when pregnant? Then check out these handy tips for each trimester

This is one of the best offbeat Germany

Though the two of us did not participate in any of the region‘s specialties, we spent some very beautiful days slowly walking past young grape covered vines, watching golden sunsets and eating good food. Our finest memories are of exploring medieval castles of the region and discovering deep azure blue volcanic lakes by mistake. In the next few posts, I will share our Moselle Valley itinerary as it went and invite you into a fairy tale of sweet summer days, young vineyards, picturesque castles and quaint villages. This is the dreamy Moselle Valley, one of the best of offbeat German destinations.

The Moselle Valley charmed us

It was the end of summer

With mild days and

And lots of wildflowers.

When we set of for the Moselle Valley

And beyond, for some quiet time together

Before the arrival of our baby son.