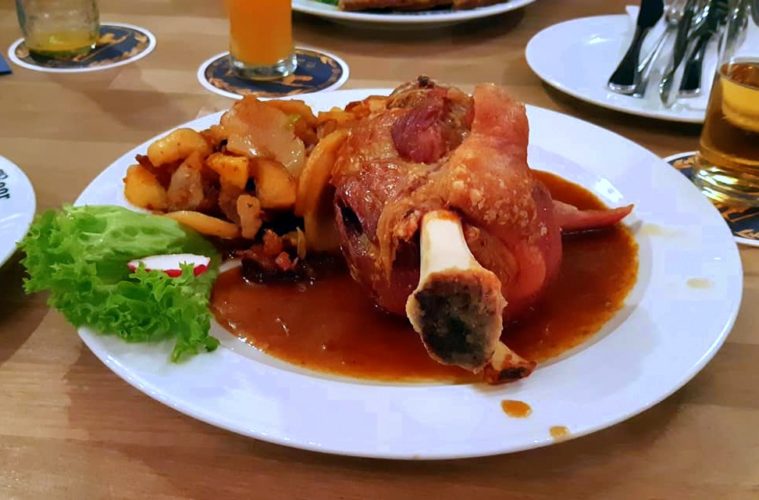 Kölsch, Schweinshaxe, and other joys of a brauhaus in Cologne

Earlier this month in Cologne, I went on a local food and drink binge with my friends. Since summer was at its peak, with bright hot days and blue skies, we barbecued meat, fishes, and potatoes as per the hearty German seasonal tradition. Wine and the light, hoppy local beer Kölsch flowed and we enjoyed a perfect summer. The mild evenings called for something more fun and apart from the lively Venloer Strasse Street festival, I visited a couple of Cologne Brauhauses for a more authentic Köln experience.

Now German Brauhauses are nothing short of culinary legends and you can compare them to the lively Indian dhabas. These places are charged in the evenings with red-faced, ale-infused hilarity, and the food served is hearty German fare. Cheerful and atmospheric, Brauhauses are full of character. Being very similar to the British pubs in nature, they double up as a lively food and drink place, which was originally meant for the locals. These relaxed venues often have a beer garden in summer and in Cologne, they serve the skinny 20cl glasses of Kölsch.

You may also like: The best of the German wurst

A pale and hoppy beer, Kölsch has a regional appellation and it must be made in Cologne to be granted the title. It is served in skinny glasses instead of giant beer mugs, and this keeps the beer cold until consumption. No Brauhaus visit is complete without sampling the regional dishes from the German Küche (kitchen) and my friends and I gorged on gutbürgerlich küche (unpretentious home-style food) that was filling tasty and good value. Brauhauses were originally meant to cater the blue-collared people and so the food served there did not come with frills and fancies. Instead, they used easily available local produce and churned them up to fill bellies of hard-working folks.

Till today, the Brauhaus cuisine has stuck to its original recipes and some of their specialties are Shweinshaxe, Himmel und Erde, Decke Bunne mit Speck, and Halver Hahn. This is not a place for the vegetarians or vegans and traditional German food consists of a lot of meat, potatoes, root vegetables, fruits, and cream. Shweinshaxe, for example, is a huge crispy knuckle which could have graced a medieval banqueting table, and the Himmel und Erde is a gutsy casserole of puréed apple, onion, and potato with black sausage. It literally means heaven and earth and Himmel und Erde tastes as heavenly as it sounds. The winter-warmer Decke Bunne mit Specke hails from the Middle Ages as a simple and satisfying poor man’s meal. Made of broad beans, with potatoes and bacon, it is high in protein and low in cost dish enjoyed best with large swigs of local ale. In my case, I stuck faithfully to Kölsch and sipping the iconic beer in a traditional brauhaus was a very interesting experience.

Some ‘good to know’ etiquette for visiting a brauhaus for Kölsch

Needless to say, visiting a brauhaus is a must do experience in Cologne and there are few “good to know” etiquette associated with it. A waiter in a brauhaus in Cologne is called a Köbe and they are famous for their dry, witty humour. Since Kölsch is served in 20cl glasses called Stange, the Köbe carries a special beer tray which holds a lot of these skinny glasses. You will be served a Stange of Kölsch immediately upon seating and order your alternative choice quickly if you want something else. The brusque Köbessen are hard-working men who rush about serving thirsty patrons, especially in the evenings and they are quite curt to wishy-washy guests.

Since the ambiance inside a Brauhaus is boisterous, with red-faced ale induced jolly guests, whoops of laughter and drunken snippets of hearty German songs, it is at times difficult to hear across the table. That is why expect the köbes to keep slapping cold Kölsch onto your table until you admit defeat and place a beer mat over your glass. The Köbe also writes a mark in your beer coaster each time you are served a beer and the total is added up on it.