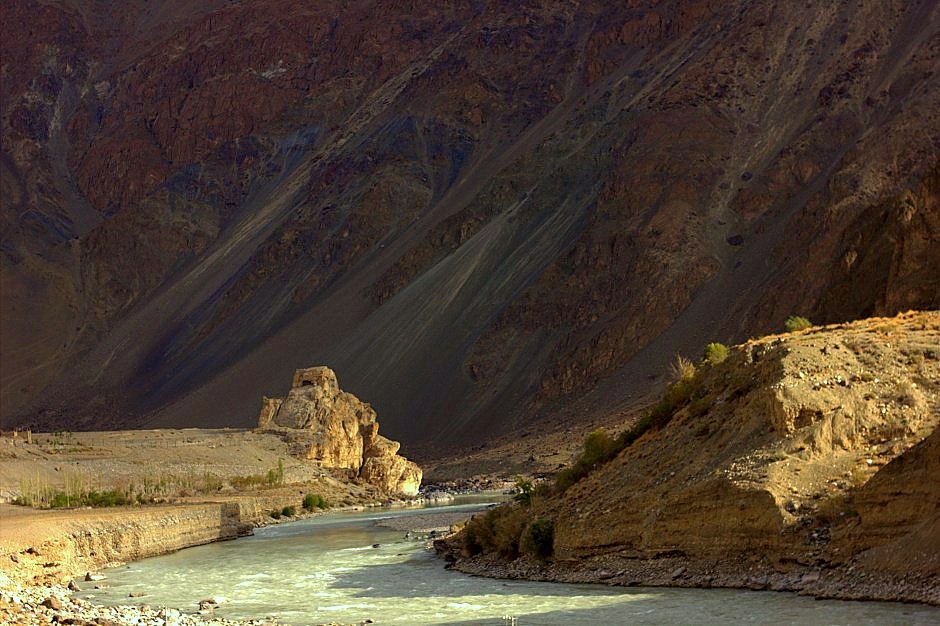 Reaching Ladakh by road from Kargil

Endless bleating woke me up to a bright sunny morning. I went out of my tent and saw a lovely bowl-shaped green forested basin surrounding me from all sides. The camp, where I rested overnight was called Nun Kun and it was named after the nearby twin Himalayan peaks which are separated by a snowy plateau. Mountains and tiny hamlets surrounded the campsite keeping it nicely buffered from the dusty crawl of Kargil and it was a lovely place to get your gearing for reaching Ladakh by road from Kargil. I was on the second day of the epic Srinagar Leh road trip and I was already bone-weary the moment I opened my eyes.

The morning after in Kargil

The cheerful bleating came from troops of curious shaggy goats which boldly marched close enough to inspect me as their watchful shepherds lolled in a distance. A few of these nimble footed creatures stepped into my friend’s zone and I shared a leisurely plain breakfast of hot, thick potato parathas (Indian savoury pancakes) with them. Soon, my tiny offerings from the breakfast drew birds too and it was a peaceful, calm start of the day. I loved being there with them, surrounded by stark mountains of strange shapes, something which I have not seen before and lingered longer than planned to cherish that tranquility. In retrospect, I am happy about my decision, because the journey immediately after leaving Kargil became more arduous than the previous day. My destination Leh was still 217 kilometers away and the mountains got higher and higher from there. The air thinned out more as I soldiered on towards Leh and my breathing became increasingly labourious.

You may also like: The first half of Srinagar Leh road trip

Leaving the gentler slopes of Kargil behind

The distraction of Ladakhi Shangri-La

The landscape, however, was so magical, that it pushed everything else out of my mind and I remained transfixed as “Shangri-La-esque” surreal beauty took over. The jewel-hued confluence of Zanskar and Indus rivers dominated the scenery and nature donned a raw, powerful appeal. It made me feel, very puny and helpless and the encircling mountains created a bedazzling claustrophobic feeling. I felt as if nature was showing off her magnificent might with a sneer on her face and the starkness was a chilling reminder of what she could do to us. Only the smiling faces of immigrant workers’ toiling relentlessly on the highway added the necessary human touch, to the otherwise very alien-like surreal landscape. Being my first face off with Ladakh in Jammu and Kashmir, I am sure, the region awestruck me more than the seasoned travelers, but until today, I have seen very few places on earth, which are as powerfully compelling as the cold, arid Himalayan ex-kingdom. The Lamayuru monastery arrived soon, along with its famous moon like surrounding natural beauty and the earth seemed to be composed of only the rocky mountains and an endless blue sky.

Suggested Read: The mountains of Dharamkot in Himachal Pradesh

The higher the altitude, the more rugged the mountains

The Moonland on the way to Ladakh by road

The dividing line between the two elements got lost among the jagged peaks and the sci-fi movie worthy rocky curves and their colours became strangely muted. A rich golden brown of various tones created more visual layers on the mountains and the fluttering of the Buddhist peace flags animated the whole scene. The slow whirring of prayer wheels joined the constant fluttering and these two were the only sounds which could be heard in that entire huge landscape. It was too beautiful to be true and I watched open-mouthed as the mountains appeared in bizarre twisted shapes resembling lunarscape. The Moonland seemed to be a fitting name for that area and the amazingly contoured mountains ranged from golden, steel grey, purple and green. A handful of blue-green rivers remain steadfast throughout the road trip as if balancing the still stony beauty of the mountains with some fluidity and I soon lost track of time and place. Giving yourself up to be one with raw, wild nature is easy in Ladakh and that is one of the best ways to experience this magical place to the fullest.

Recommended Read: Beyond paragliding in Bir in Himachal Pradesh

The white noise destination of Ladakh

Then there is Ladakh‘s ever pervasive silence, which is more powerful than any noise and the calmness it instills inspires awe rather than tranquility. For a cacophonic country like India, this muteness is a real treasure and Ladakh excels in sublime sounds. It often seemed to me in Ladakh, as if the huge upturned bowl of the blue sky had swallowed up the sounds, leaving only soothing hushed noises for our relaxation. Whether it was the humming Buddhist chants, silently stepping monks, small twitterings of birds or soft murmur of the local dialect, Ladakh was a white noise destination for me. Every night, lulled by the cool cotton wool silence, I slept like a baby there, woke up without a rush of sounds jamming my senses and during the day, even at touristy areas, could hear myself without being loud. The endless non-changing blue skies worked their magic too and Ladakh epitomized the land of smiling heaven. Only the rush of young rivers broke this pact of silence and they flowed with roaring reckless rush for the plains.

The astonishing Moonland near Lamayuru Monastery

The pull of the Magnetic Hills

Ladakh with its silence was a therapy, which I needed exactly at that moment and stage of my life and I guess, that will be my biggest draw for me to go back there again. This unusual lonesome charm of Ladakh is quite addictive too and during the road trip, I got so used to the solitary confinement of the landscape that any kind of human intrusion started to feel out of place. This realization hit me hard when apricot sellers came in flocks at a pit stop where we stopped for a while and I got more road weary of them, than the journey itself. I left from there quickly after buying some bags of local tarty fruits and traveled nonstop until the famous Magnetic Hills appeared. Located at a distance of 30 kilometers from Leh city on the Leh-Kargil highway, Magnetic Hills supposedly defy the law of gravity. Much popular among road travelers and day trippers from Leh, vehicles are often seen moving upwards on the hill when parked at a particular location. Though many theories refute this geological wonder as fraudulent, the Magnetic Hills is a beautiful place to be.

Moreover, Leh no longer seems far from there anymore and it acts as a perfect pit stop for tired travelers. I did not manage to spend much time there as a mighty storm brewed at a distance and the surrounding peaks got blurred by snowstorms. The sky suddenly darkened into late twilight and by the time, I passed the Patharsahib Gurudwara, rain splattered on the tired car like falling coins. Leh thankfully arrived in the next 30 minutes and being late evening, it resembled a ghost city. All the city markets were shuttered closed, houses became quiet and the streets looked lonely in the yellow light. I was starving, cold, breathless and exhausted by the time, I checked into the hotel and a warm bed made me crash out immediately.

Kargil despite being the necessary night stop for most travelers has poor tourism infrastructure standards and very limited options of accommodation. The town itself has nothing much to offer to the tourists except for Munshi Aziz Bhat Museum of Central Asian And Kargil Trade Artefacts. Owned and maintained by two brothers – Gulzar Hussain Munshi and Ajaz Hussain Munshi it was opened in 2004 primarily as a repository of artefacts associated with the Silk Route trade. These artefacts date back to the 19th century when Kargil served as a principal trading center along this passage. Most artefacts displayed in the museum were discovered and retrieved from Ek Sarai (a local rest house) and many have been donated by other local families historically associated with the trade route. The rest house was built in Kargil for traders in 1920 by the owner’s grandfather, Munshi Aziz Bhat and used to be a popular watering hole for frostbitten weary traders. For those wishing to go down this well-trodden trade route can visit www.indianmemoryproject.com for more information. Dedicated to the Silk Route which flourished during the reign of Alexander the Great this museum offers a very interesting time travel.

I started early the next morning

Leaving Kargil and my friends behind,

I soldiered past cheerful road builders

It was a fantastic journey

Which never seemed to end

And after two days finally reached Ladakh by road.