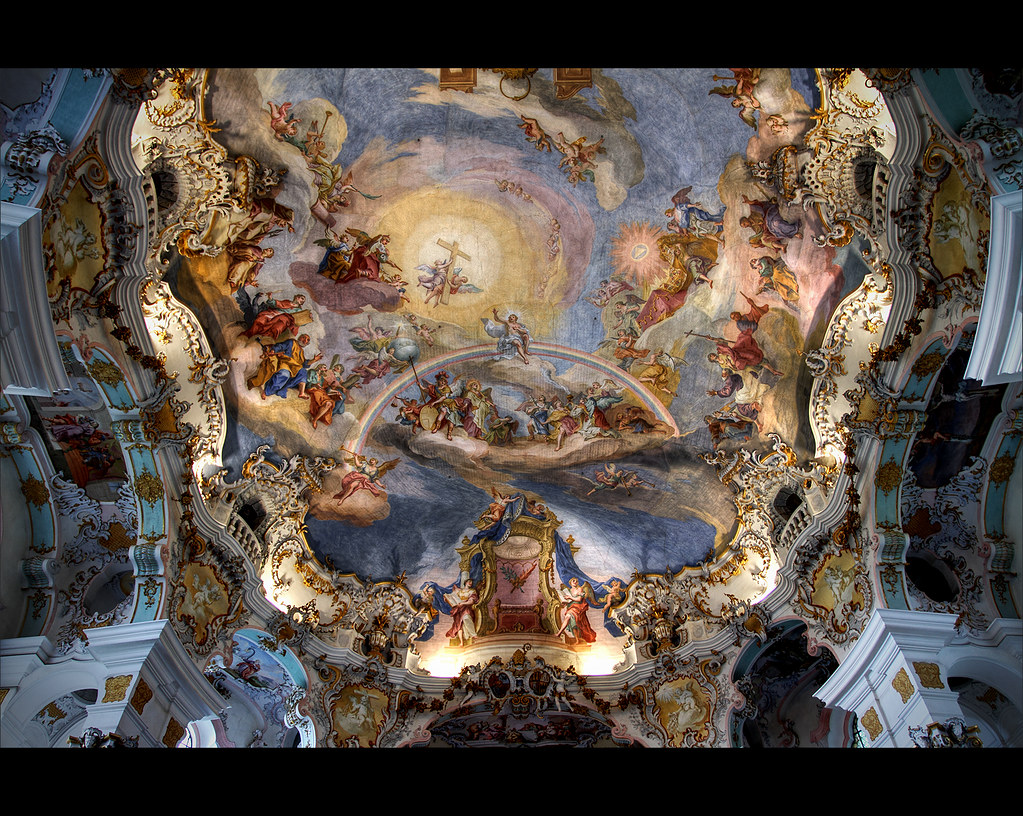 The story of Wieskirche is one of faith. A UNESCO World Heritage Site, it was created by the legendary artist-brothers Dominikus and Johann Baptist Zimmermann. According to the local folklore, in 1730, a farmer in Steingaden, about 30km northeast of Fussen, witnessed the miracle of his Christ statue shedding tears. It raised a huge hue and cry and pilgrims started arriving into the town in hordes. The number of these seekers increased so much over the next decade that the local abbot commissioned a new church to install the miraculous statue.

A building that ran out of budget

Consequently, in 1745 the work of Wieskirche began under the direction of the celebrated architect, Dominikus Zimmermann. He was to construct a house of god in one of the most polished Bavarian Rococo designs. Zimmerman did so and thus was created an opulent building of worship amongst the pastoral setting in the foothills of the Alps. The choir was consecrated in 1749, and the remainder of the church was finished by 1754. It is believed that this project was in grave danger of running out of money since the massive pilgrimage church ended up costing six times more than the original plan (180,000 florins instead of 39,000). Back then it almost led to the bankruptcy of the Steingaden Abbey. In hindsight, however, it was money well spent since the Wieskirche is one of the most remarkable day trips from Munich.

A contrast between the inside and outside

From the outside, the oval cream-coloured building of the Wieskirche looks quite plain. It is devoid of any ornamentation and is as staid as can be. Magic happens the moment one enters the hallowed interiors. A gigantic oval fresco dominates the scene and it is framed by stucco decorations and gilded sculptures. There is an abundance of angels, saints, and other holy figures crowding the pearl-like iridescent sky and the masterful Trompe-l’œil effects add to the magic. Despite the sensual overload, it doesn’t appear gaudy and instead, gives one the feeling of stepping into an enlightened holy area through the gigantic golden portal above the main entrance.

The most impressive feature is the usage of light and the way it creates an unstrung continuity and lightness of the whole ensemble. There is a diaphanous feel to the interiors and all art forms and techniques used inside – architecture, sculpture, painting, stucco work, carving, ironwork, etc. – were melded by the architect into a perfect, unified whole. There is a sensation of stepping inside something remarkably lights and airy. The soft yet lively colours of the paintings bring out the sculpted details and, in the upper areas, the frescoes and stuccowork interpenetrate to produce a light and living decor of unprecedented richness and refinement. The abundance of motifs and figures, the fluidity of the lines, the skillful opening of surfaces, and the ‘lights’ continually offer the observer fresh surprises. This remarkable stucco decoration is the work of Dominikus Zimmermann, assisted by his brother Johann Baptist – who was the painter of the Elector of Bavaria, Max-Emmanuel, from 1720. Master builder Dominikus Zimmermann remained closely associated with the Wieskirche in Bavaria until his death in a house he built himself, which today serves as an inn.

Wieskirche is located in Steingaden in Bavaria in Germany. It is close to Fussen and makes a great day trip from Munich.

The effects of the ceiling fresco

An interior full of light

Beautiful details of the interiors of Wieskirche