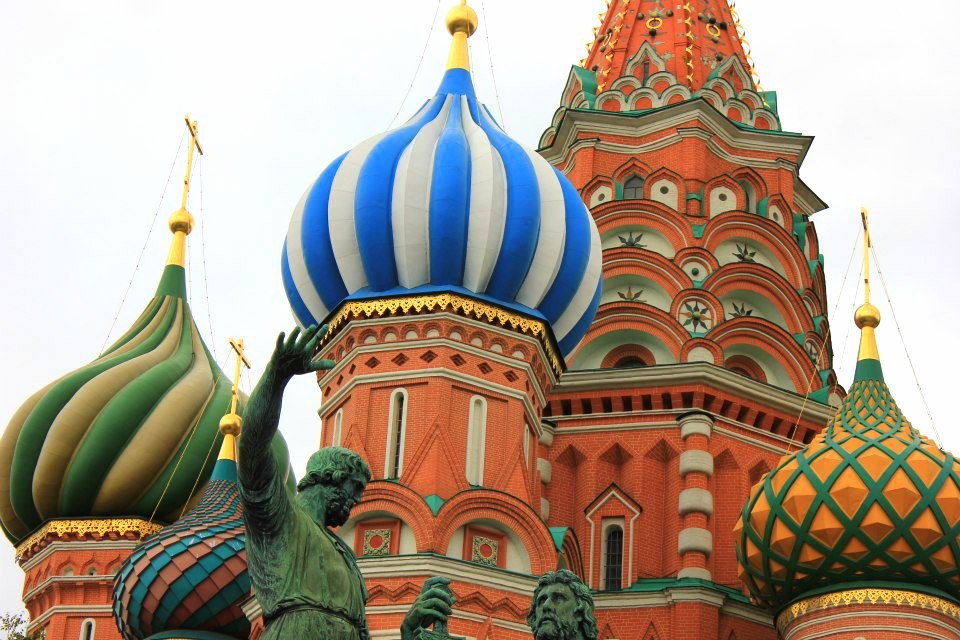 My Moscow trip in a nutshell

I woke up to cloudy skies the next day. It was my 2nd day in Moscow and despite the dreary weather, I was eager to explore the city. The hostel owner Timmy helped me with my itinerary and I hurriedly dressed to start the day. It was colder than the previous evening and the mood of Moscow seemed subdued. Perhaps this was due to the weather or the fact that it was a Monday morning, the first day of the week. My first stop was at the famous Red Square and the Kremlin. In Moscow, all roads seem to lead to the Red Square and I took in morning rush hour sights of Russia’s capital city while walking down a wide busy avenue. The scene was a regular one, found in every large metro across the world. Buses rushed, cars zipped by and trolleys trundled along the streets that were lined with stores and restaurants. Every vehicle seemed to be filled to its capacity and Moscow seemed like just another city on the planet.

Fashion and smoking habits of Moscow

People-watching in any place in the world is a lot of fun and in Moscow, this pleasure goes up by a notch or two. Russians by default are usually quite attractive and they are definitely some of the most stylish people on earth. Fashion and smoking seem to be raging trends in Russia and Moscow, being the capital city show off plenty of both. Because of the chill in the morning, nearly everybody from punk haired youngsters to bleach peroxide blonde old ladies seemed to smoke and innocent-looking nicotine puffs mingled with the already polluted air. Strange complicated sounding names met my eyes everywhere I looked and wedding cake style buildings with pretty embellishments lined the avenue down which I was walking. The walking did me good and I soon warmed up. Following a trail of fresh baking smells, I reached a hole in a wall bakery and bought a few crisp beef pastries along with a cup of Cha (tea). The wholesome breakfast cost me a mere 130 Rubles which was a fraction of the cost of breakfast at establishment eateries. That was my first lesson of saving money in Russia and I munched on the pastries while continuing my walk. Overall, it was a very pleasant start of the day and the only thing I watched out for was the fake police. Apparently, Russia, especially St Petersburg is riddled with the fake police scam in which uniformed men pretending to be policemen take away hapless unsuspecting tourists’ passports at some pretext to extort money.

Inside the gorgeous Red Square

Despite the glum weather, the Red Square was busy and lively. A spectacular UNESCO heritage site, tourists, and locals mingled excitedly there as street musicians played, tour agents announced their wares on megaphones and bells tolled non stop. Pigeons flew off in hordes and there was a general sense of excited awe in the air. I started my Red Square exploration with the gorgeous onion-domed  St Basil’s Cathedral and walked around for hours at the spectacular GUM, the Tomb of the Unknown Soldier and the pretty pastel-coloured Kazan Cathedral. All of the beauty of Moscow seemed to have got concentrated at the Red Square and the fall colours made the royal Russian opulence look even richer. The autumn leaves dropped like flecks of gold and the late-blooming flowers exploded with deep jewel colors. It was a beautiful day filled with so much grandeur that I did not even notice how the time passed. It was only when the sunset lit up the sky with a burst of golden light that I realized the time and left Red Square to visit the Cathedral of Christ the Savior.

See the sun set at the Cathedral of Christ the Savior

The Cathedral of Christ the Savior in Moscow is a stunning church in white with glowing golden domes that blush saffron during sunsets. Needless to say, it was a wonderful second day in Moscow and I remember going to bed that night with a happy feeling of self-confidence. Moscow is a vast city with a complicated Metro system and it is not the easiest place to navigate for a non-Russian speaking traveller. Nevertheless, I felt that I had managed quite well; figured out the Metro network, hacks on travel money, and avoided all kinds of scams. The next day was the last one that I spend in Moscow and I had plans to travel explore the famed Golden Ring cities. I did not have much time on my hands and to make the most of it went to visit the beautiful grounds of the Tsarisyno Palace.

Inside the Ekaterininskiy Park in Moscow

Created for Catherine the Great, Tsarisyno Palace is one of the loveliest attractions of Moscow. It has a beautifully landscaped park with beech forests, fairy tale bridges, grottoes, fountains, lakes, and ornamental hothouses. Originally intended to be the summer palace for the queen, Tsarisyno Palace was left unfinished as her money ran out. Lovely ponds, walking trails, bandstands, and archways fill this big park and I hopped on a buggy tour to enjoy the expansive grounds to the fullest. The palace itself did not impress me as much as the gardens. The mint coloured palace with its spiky archways seemed a bit Disneylandish but the fall foliage of the park made the entire setting gorgeous. I stayed there until late noon and on my way back to the Metro station, bought bagsful of dinner from small local eateries. Tsarisyno Palace being a bit out of the touristy areas has lots of amazing Lebanese diners around it. One can buy juicy shawarmas, grilled chicken, and cha for just 100 Rubles and I enjoyed my takeaway dinner at the shady park of the green-domed Trinity Church. From my location, I enjoyed a lovely panorama of the sunset setting over Moscow and it felt to be the most fitting place to say Dasvidanya to the exciting capital city of Russia.

The beautiful gardens of Moscow

Russia is perhaps not the cheapest country to travel and exploring Moscow can seem like an intimidating idea. With the following money-saving hacks, make your first visit to Moscow not only affordable but also a lot of fun.

For a more comprehensive Moscow on a budget guide, check out this detailed information.

The world’s largest country seems to have it all: awe-inspiring natural beauty, exquisite architectural jewels, ornate culture, intriguing folk rituals, glitzy metro cities, and lots of myths. This is the land of massive economic, political, and social power. It is also the land of shamans, bears, volcanoes, icebergs, and long unexplored stretches of taiga. Imagination runs wild when it comes to Russia and it is one of my favourite places in the world.