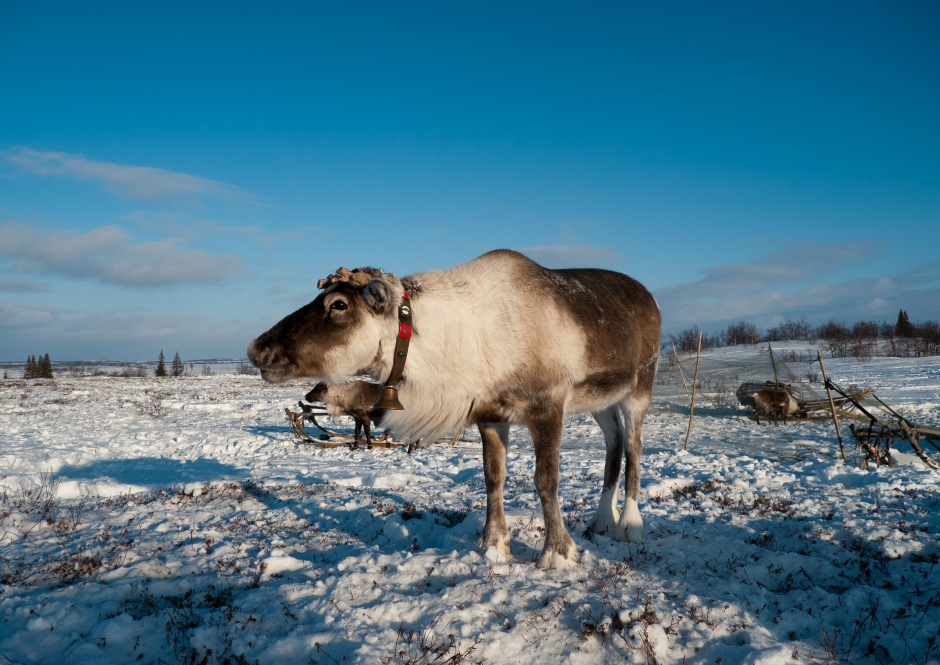 The lost Pomor village on the frozen White Sea coast

On the fourth day of my Arctic Adventure, my little group and I went deeper into the Murmansk Oblast federal subject (district) for Aurora Borealis sighting possibilities. Yet despite keeping constant night watches under clear skies in freezing cold temperatures, the fantastic ‘Dance of the Spirits’ Northern Lights continued to elude us.  We heard reports of astonishingly beautiful Aurora sightings all across the Aurora belt even around our campsite but somehow they never happened where we were.  So on our fifth day at Lovozero we decided to drive more south into the Kola Peninsula, cross the Arctic Circle, and head towards the White Sea. It was a long drive past mountains, lakes, and flat stretches of endless tundra and we came to a standstill at the brink of a time-warped Pomor village, in the middle of a white nowhere. Though we were on the Karelian coast of the White Sea, Kovda was officially located in Murmansk Oblast region and it was one of the oldest Pomor villages in the world.

The beginning of my Arctic Adventure in Russia

The time-warped Kovda village near the frozen White Sea

Many 15th century maps mention the Pomor village of Kovda and in the 19th century, it was a bustling hub of about 1000 residents. Complete with three functional sawmills which were operated by the Russians, British, and the Swedes, Kovda was full of historical importance. Originally inhabited by the Pomor people, modern-day Kovda had only 20 residents and the village wore an abandoned look. The curling Kandalaksha Bay, an arm of the gloomy White Sea lay frozen around us and all we could see were dazzlingly white. A deathly silence prevailed and somewhere a dog barked. Log huts and a 17th century made of wood stood silent and there were hardly any signs of habitation. The lovely Kovda river was blindingly white and frozen under the clear blue skies, and its namesake village resembled the long-vanished community it once had housed.

Who were the Pomors?

An ancient trading community from Russia (especially from the Novogorod region), the Pomors lived by the sea and were whalers, hunters, sailors, and fishermen. They thrived in the northern part of Russia and were Orthodox Christian in faith. That is why many Pomor villages are known for exceptionally beautiful wooden churches, though very few remain intact today. The most famous of them is in the village of Varyuga, where the famous Church of Assumption was built in 1674 without using a single nail. We left Kovda soon, pausing briefly to take in the last glimpse of the forgotten Pomor village perched on rocky cliffs above the point where the small Kovda River flowed into the Startsev Inlet. The city of Kandalaksha was our next destination and we detoured to experience the White Sea filled with ice-drift.

Leaving the Arctic city of Murmansk was not tough

Crossing an arctic pink sunset for the city of Kandalaksha

Kandalaksha meant going further away from the Arctic zone and it diminished our chances of seeing an Aurora Borealis. The thought made us pretty disheartened and the entire trip seemed to be a wasted effort. As exciting as the Sami and Pomor experiences had been, It was my dream to see the Aurora Borealis with my own eyes and I stared in disappointment as a beautiful sunset over the frozen Russian landscape. The retiring red globe dipped below the pink-tinged horizon and softly rolling mountains blushed a lovely shade of rose. Kandalaksha arrived with glittering lights and lit up evenings, and to us, it seemed like yet another featureless city, scattered by hundreds across the planet.

Reindeer herding Samis of Lovozero were an eye-opening experience.

Yet another Aurora Borealis night watch

At Kandalaksha we checked into a hilltop hotel which had a strange name. Sounding something similar to a Sanitarium and Spa, it was as an archaic dinosaur of a hotel. An old sagging institution, belonging to the Soviet Union times it was starkly functional, dark, and totally outdated. The rooms, however, were warm, clean and overlooked a nearby forest. We were all bone tired and longed for warm showers, so post an unmemorable dinner, quickly bade each other goodnight and retired to our rooms. Though scrubbed clean, and cosily tucked into my bed sleep still eluded me. I tossed about restless, staring at the pitch dark forested landscape outside and stayed awake all night praying for a celestial miracle called the Aurora Borealis. We were at the very end of the Northern Lights viewing belt and it was our last night (chance) before heading into the beautiful neighbouring Karelia.

Longing for more from the beautiful continent-sized country? Check out my beautiful photo series of Russia

Brought with many different experiences.

From visiting the Lenin Icebreaker in Murmansk,

Meeting the Samis at Lovozero, To an endless Aurora wait,

In the middle of a vast endless white expanse,

As extreme as it could be. Sights that took our breaths away and

And its Pomor heritage

Was another discovery on that trip.

The frozen White Sea dazzled nearby

And I loved the old wooden Pomor churches.

Although Aurora Borealis eluded us, we moved towards Kandalaksha in peace.

Disclaimer: A huge thank you to Nordic Travel for making my Aurora Borealis dream come true.  Though all the opinion is strictly mine, the photos of this series are copyrighted to Nordic Travel. Reproduction of this work is permitted only after approval from Nordic Travel.