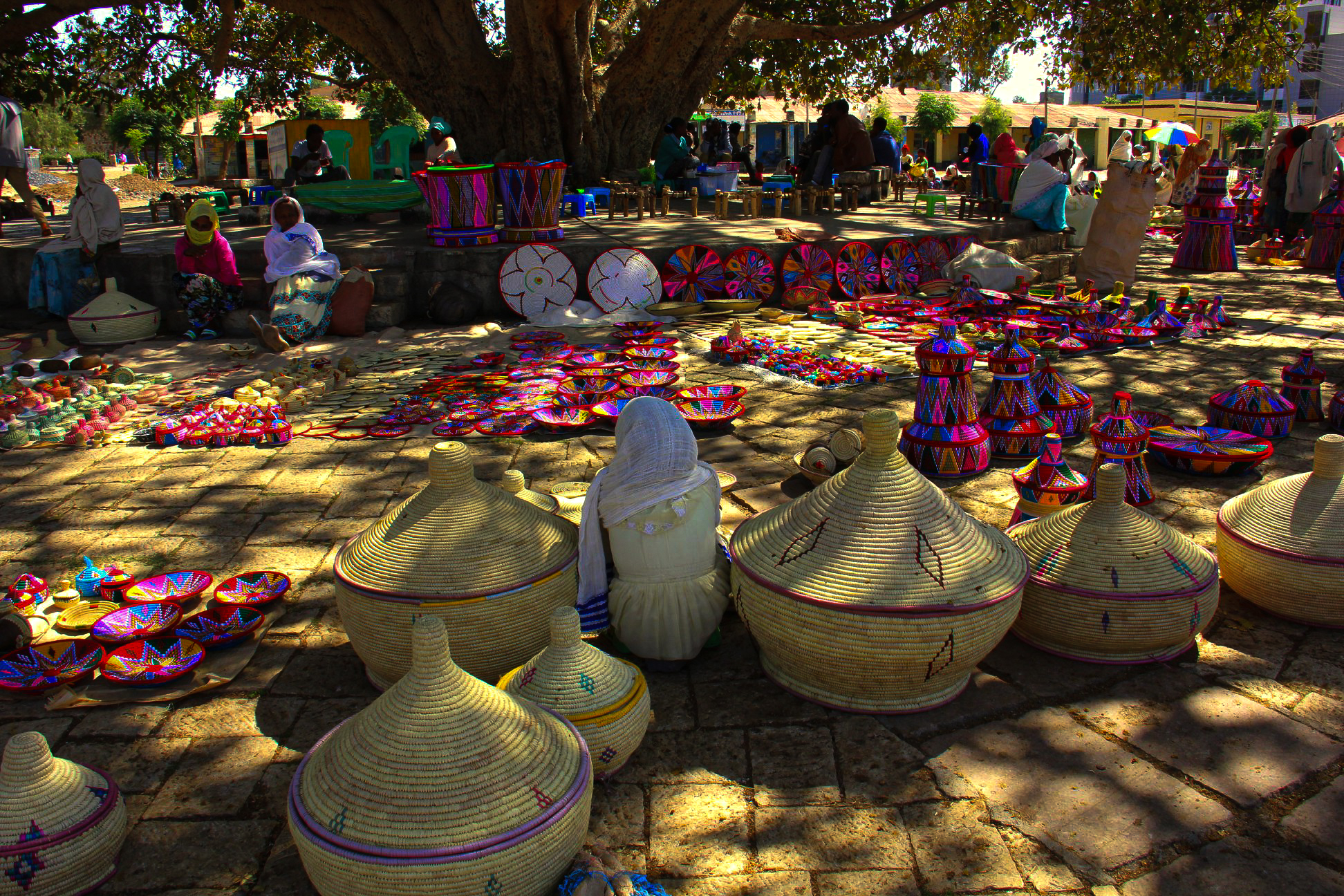 Aksum held no attraction for me except that I wanted to be in the Tigray region of Ethiopia. I was still relatively a travel newbie to Ethiopia, just 10 days old out of which 7 were spent in the remote Omo Valley. My overwhelming Omo Valley experience shook me up a bit and I longed for some relaxing, comfortable moments. So, one fine rainy morning in Jinka, I bought an Ethiopian airline flight ticket to Aksum and started preparing myself for Ethiopia’s northern parts. I read whatever I could find online on Aksum, wondered in amazement at its Biblical importance, and the fact that it was Queen Sheba’s hometown. The mysterious needle-shaped stelae intrigued me and I very much looked forward to Aksum.

Off to Tigray region in the north

Moreover, I was tired of Omo Valley; its brash commercialism, the lack of comfortable travel infrastructure, and remoteness. In Jinka, which is the biggest town of that region, I felt cut-off from the rest of the world, and my heart desired some semblance to the world I know. So, on one rainy morning, I hired a taxi to take me through the muddy streets that were crowded thick with banana plantations and crowing roosters, to the tiny patch of an airport for my flight to Aksum. Jinka airport consisted of a few corrugated metal-roofed sheds, a small strip of a runway, and lots of banana trees. Lush, wet, hilly greenery surrounded it from all sides and despite the pleasing beauty, I looked forward to my flight. Thankfully, the Ethiopian Airlines flight was on time and we landed in Addis on time for me to catch my connection to Aksum.

The landscape changed drastically as we flew towards the northern part of Ethiopia and gone were the lush, green sceneries of the south. We were approaching a dry, high-altitude land that comprised mostly of stony mountains, and a harsh sun-baked it into deep shades of brown. My flight from Jinka to Aksum was via Addis and even though it took half a day to reach the Tigray region, it was the fastest and the most comfortable way to reach there. Vast distances and lack of a well-established public transportation system are two unexpected hassles of traveling through Ethiopia and by the time, I arrived in Aksum, it was already seven in the evening. I had started from Jinka at 9 in the morning and after the long day, all I wanted, was a comfortable bed and a clean room.

A bunna woman of Aksum

Aksum is the best place to relax and rejuvenate

Ethiopis Hotel provided all that and more. In fact, I was so comfortable there, that I simply extended my stay in Aksum and rested my tired body. The hot Tigray sun made siestas wonderfully nice and the loud music from the next-door street bar kept me awake until late. So, I used to sleep until late, something that I had not done for many years, laze in bed reading books, eat meals at irregular times, and walk around Aksum cobbled stone streets around sundown. My hotel room balcony overlooked the arterial street and I often passed hours people watching from there. It was finally in Aksum, that I let my guard down, rested, relaxed, and enjoyed my travels the way you expect to be doing on a holiday. Sunsets meant beer at the hotel’s street cafe, and during my entire stay in Aksum, I patronized one bunna place (Ethiopian coffee shop), one restaurant, and one grocery store for my needs. They came to know me eventually and it was such a comfortable routine, that only the thought of a diminishing number of days from my Ethiopia stay made me head over to Mekele. In the end, one fine Saturday afternoon, after visiting the Basket Market at Aksum main square, I headed over to a travel agent’s shop and bought myself a tour to Gheralta rock-cut churches. It was a day trip that included visits to several rock-cut churches with the final destination being Mekele. I was to continue to Danakil Depression and Erta Ale with the same company and caught between the charm of slow traveling in Aksum and the excitement of visiting the famous rock-cut churches of Ethiopia, I completely forgot to see the famous stelae field of Aksum.

Even at that time and in retrospect, I do not regret it. Aksum remains my favourite city in Ethiopia. A small, walkable town with shady boulevards, cobbled streets, and friendly locals, I spent a lot of time connecting with the people there, something that I sorely missed in Omo Valley. Despite being a UNESCO World Heritage site, it is not overrun by tourists and this makes it a great place to catch a breather before heading over to the challenging Danakil Depression.

Aksum is a town in the Tigray region of northern Ethiopia. The Tigraian people, who speak a unique Semitic language called Tigrinya, are noted for their distinctive stone architecture, intriguing history, and the dramatic traditional hairstyles and flowing dresses of their women. It was the capital of the East African Empire of Aksum and thrived since the 1st century AD. The ancient world considered the Aksumite kingdom as one of the ‘four great kingdoms on Earth’ together with Babylon, Persia, Rome, and China. Located on a plain area between the hills of Beta Giyorgis and May Qoho, Aksum’s importance stem largely from its connection to ancient biblical culture. It is according to the Bible, the home of the Queen of Sheba. If legends are to be believed, the son of Solomon and Sheba captured the Ark of the Covenant and brought it to Aksum, where it is said to remain even today. Irrespective of whether the mysterious Ark of the Covenant resides there or not, Aksum is considered one of Ethiopia’s holiest cities, and it is a pilgrimage site for many. Today it is known for the numerous monolithic obelisks or “stelae” that back at least 1,700 years. Though their original purpose still remains a mystery, the stelae are a national symbol for the people of Ethiopia. Many of these obelisks are more than 100 feet tall, and each bear carvings. Many believe that they are landmarks for significant royal graves since many tombs have been found amidst these structures. Aksum is a must-see for all keen archaeologists and for those looking for a relaxing laidback town to take a break.

Aksum is a part of the Northern Historical circuit of Ethiopia. It is in the Tigray region and is mid-way between Gondar and Mekele.

A shared taxi to or from the airport which is 5.5 km away from the town costs around 100 Birr (US$3.50) A private tuk-tuk or Bajaj (as they are called in Ethiopia) costs 30 to 40 Birr to go from the town center to the Northern Stelae Field. Shared Bajaj is available for only 3 Birr and is an easy way to cross the town.

Except for the rainy season (May and September) when it is cold, wet, and muddy, Aksum is a year-round destination. Even though it is located at an altitude of 2130m, Aksum enjoys a hot, dry climate with bright sunshine and startling blue skies. It gets cold on cloudy days.

How many days to spend in Aksum

Depending on whether you want a touch and go visit or a relaxing stay, Aksum is best enjoyed in more than two days. For keen archaeology lovers and hikers, keep an extra day for the hikes to the site of Yeha or the famous monastery of Debre Damo.

Nowadays (in 2019-2020), Aksum offered a limited but varied number of accommodations. From cheap youth hostels to the comfortable two-star stays, one can take a pick according to their budget. I stayed at the centrally located Ethiopis Hotel and liked it very much. The Delina Hotel and the Armah are reputed to be quite comfortable as well.

Things to See and Do in Aksum

Most travelers head over to Gondar, Gheralta or Mekele from Aksum. Many fly to Lalibela from here or return to Addis Ababa.