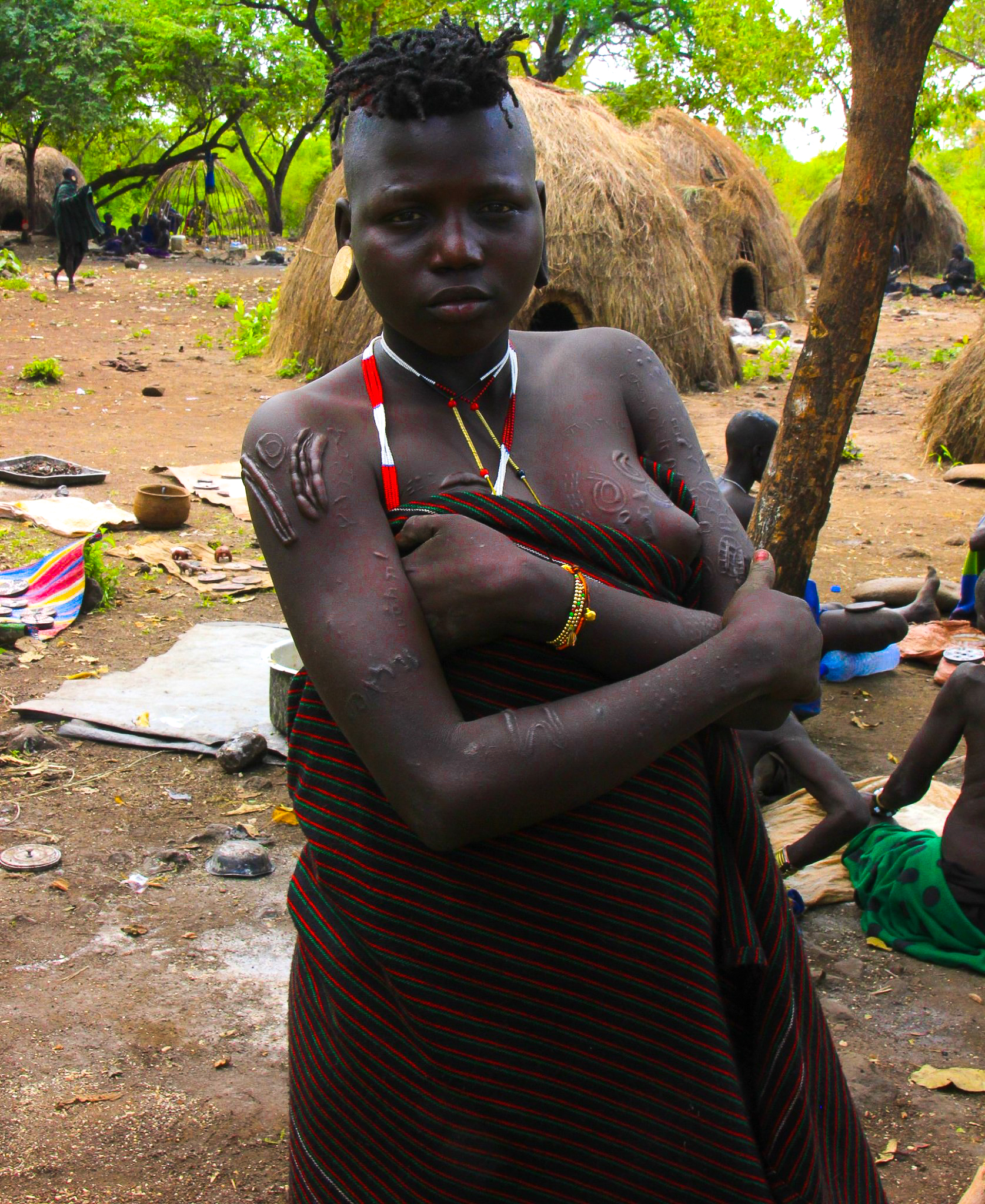 “Caramela, caramela”, “dollar, dollar”…little boys of around five or six, their faces and bare bodies fascinatingly painted, followed me around as they repeated this chant. Soon, they were joined by adults, young women with stunning haircuts, unabashedly bare-breasted, and beautifully bedecked in beads. They too repeated the same mantra as if on some kind of trance and jostled each other to offer me their traditional jewellery for sale. Their men sat under acacia trees, naked except for loincloths, and stared as I struggled to get away from the clawing crowd. Their upturned bowl-shaped reed huts stood in neat circles around me and cowbells rang out from the nearby rudimentary pen. Over a spit that was located right in the center of a neatly swept dirt square, a whole cow was being roasted and dried meats lay spread out on sheets on the ground.

Ethiopia’s Omo Valley is like a time black hole

I was in the middle of Ethiopia’s Omo Valley, being hassled, saddened, and fascinated. Human life existed here for the four major purposes: survive, produce, procreate, and celebrate. The raw basic lifestyle of some of the most fascinating tribes in the world amazed me and their child-like innocence from worldly things was equally surreal. Here I was a solo woman traveler, financially independent, and socially empowered enough to travel there, while most of these people lived in a sort of time black hole. They cared more about caramel candies, and pens rather than having much idea of the value of their land which they inherited through centuries. Neither did they completely understand the threat of manmade power plants and dams that was set to ruin their cycle of life forever. While they comprehended the lack of flooding of the Omo river, something that was essential for their livelihood (and has been for eons), the fact that it was caused by dams did not really strike them.

A world of pure primal needs

The world was still partially black and white for them. It was judged, evaluated, calculated, and counted on nature. Time was based entirely upon the position of the sun or the season, mating meant procreating and weapons were matters of pride, adornment, and protection. Even the standards of beauty are different with each tattoo or body marking telling a story of achievement, lip plates being used as symbols of marital status, and face paint marking tribal identities. Bare bodies are normal in Ethiopia’s Omo Valley with no shame being connected with nudity and in most tribal homes, the barter system still prevailed over monetary transactions. Each part of a slaughtered animal is used by Omo Valley tribes and death is accepted just like the sunrise and sunset. It is human life in its purest form, yet somewhere the modernity has muddied its pristine state.

This is no Garden of Eden

Declared World Heritage Site in 1980, Omo Valley is home to some of the most photogenic and culturally interesting ethnic groups. The landscape is beautiful and diverse, ranging from dry, open savannah plains to forests in the high hills and along the Omo and Mago Rivers and it is a remote area in southern Ethiopia. There is still no electricity, no running water, and no cars in the tribal villages and even in the 21st century, it is still a wild place. However, this cradle of mankind is no Garden of Eden and in recent years, the Omo Valley has fallen victim to the hit-and-run mass commercial tourism. Every year, increasing busloads of foreign tourists come from all over the world to take pictures, throw around money, and leave behind footprints that are changing this region forever. Since Ethiopia’s Omo Valley is a remote region inhabited by indigenous people, it is poorly suited to independent travel. This has led to massive growth in unregulated cultural tourism that indulges in a camera- and cash-based form of interaction that according to many is uncomfortably crass and voyeuristic. Important cultural ceremonies like bride whipping and bull jumping (which is an initiation ceremony into manhood and is extremely prestigious) are put on as shows thus somewhere diluting their status.

Inside a Hamar village

I thought about all these during my entire stay in Ethiopia’s Omo Valley and came back with a vow never to return i.e participate in such cultural tours unless they are mutually beneficial and ethical. It was strange to see a woman who has perhaps never thought of a life beyond her tribal community to want my phone or come running up asking for dollars. What would she do with my phone? Did she even know the real value of a dollar? It would serve her no purpose and neither would it be a natural part of her traditional lifestyle? However, there she was vehemently asking for “caramel, dollar, or phone”. Money has been a major game-changer in the Omo Valley region and hardly any of the tourism cash that flowed into the area reached the people.

Visitors at a Mursi village in Omo Valley

Would you pay to visit a human zoo?

The unregulated tourism mafia cleans off the cash leaving only crumbs for the tribal people and constant reminders of this during my entire trip made me question myself, “Am I paying to be in a human zoo?” Long story short, Omo Valley has turned into a human zoo, where we (foreign tourists) arrive to experience the exotic “otherness” and do not leave behind anything of any value to the tribal people. The locals are made to preen, beautify, and put on shows for hundreds of gawking visitors who come armed with blazing cameras, candies, pens, and money. Is this what we should encourage: a blatant dehumanization of indigenous communities for the sake of amazing travel photos on social media? Think about it because Ethiopia’s Omo Valley is on the irreversible path of destruction and while we cannot undo that, we can still minimize the impact with responsible traveling.

A Mursi woman adorned with a lip plate

Our driver with some Mursi boys