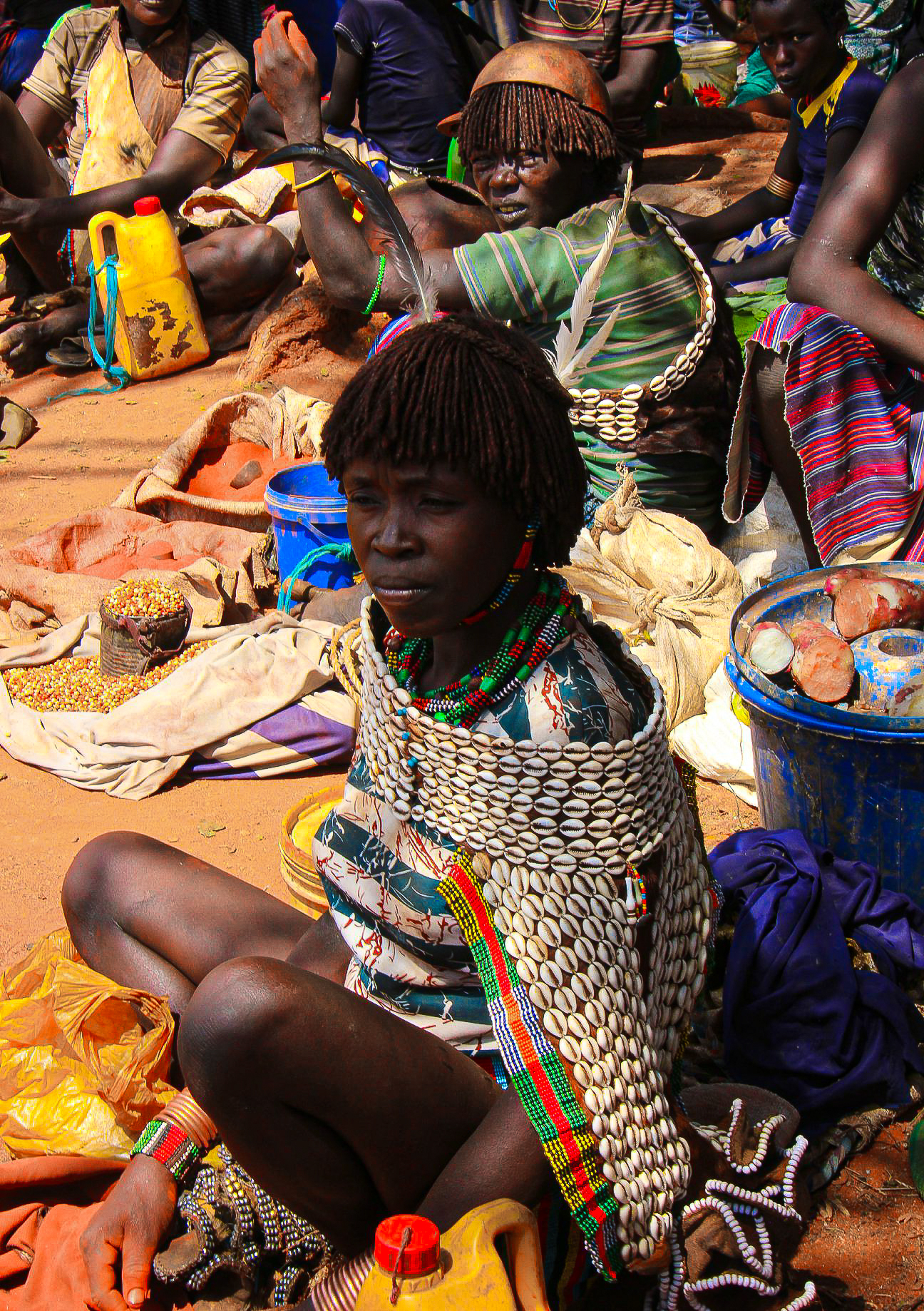 Introduction to the Lower Omo Valley in Ethiopia

The Omo Valley is all about its people and the fascinating timeless they live, or at least still did until recently.  The Lower Omo Valley villages are home very interesting ethnic groups and a trip to this still remote destination offers the chance to encounter an “exotic” primal culture. This vast semi-arid region stretches on both sides of the Lower Omo River before going into Lake Turkana in Kenya. Animist cultures and traditions prevail there and more than two dozen different tribes live in a kind of museum-like existence. This “museum-like” state refers to the lifestyle they lead, most of which is dependent on nature: the rise and fall of the Omo river tides, the forest foraging, green pastures, and rainfall. The tribes themselves are varied in their population, rituals, looks, and sometimes even languages. While many of the groups have body painting as their custom, others prefer lip plates, intricate headgears, clay patterned hairstyles, and detailed body scarification. The landscape is equally diverse and the scenery ranges from dry, open savannah plains to forested hills and the broad Omo and Mago Rivers. The financial status of the tribes depend on their accessibility and the Lower Omo Valley has turned into a highly exploited region, in terms of brash commercial tourism.

Since the Lower Omo Valley region is interspersed with small villages, hamlets, and often standalone homesteads, the weekly markets consist of the highlight of the locals’ social life. The larger villages host these markets on certain fixed weekdays and most travelers revolve their tours based on these gatherings. The two most popular markets belong to Hamar tribes who are both wealthy and large in number. The villages of Turmi and Dimeka host their weekly markets on Monday and Saturday respectively. While these markets are still mostly used by the locals to sell, buy, socialize, barter, and bargain, they are rundown by busloads of tourists bearing expensive cameras. One can get by speaking English here since these are full of self-appointed tourist guides and end up buying expensive, overpriced souvenirs. The smaller and more difficult to reach weekly markets lie on the main road between Jinka and Turmi. These belong to the Ari tribes of Key Afer and Koko. Monday markets are in Key Afer and on Thursdays, Koko holds its weekly gathering. The villages of Arbore (home to the Arbore people) and the Tsemai village of Weita have their markets on Saturday.

Mursi women with their cut out lower lips

It needs to be understood that being a relatively remote and a wild region, Lower Omo Valley is not suited for independent traveling. However, the recent spurt in tourism has resulted in a human zoo sort of scenario. To avoid being a part of this exploitation, a reputed travel operator is a good idea. This is not an “easy to access or explore” region and the services of these tour operators do not come cheap. My recommendation is Wild Philantrophy, an organization designed to build sustainable tourism with a mutually beneficial exchange between visitors and the people and land they visit. It is run by Mr. Will Jones, an innovative tourism entrepreneur born to English parents in Nigeria, raised in East Africa, and educated in England. His permanent camp, Lale’s Camp is a canvas affair consisting of sleeping mats and mess tents and caters to those who are interested in leaving positive tourism footprints in the region.

A Hamar woman with her ochre hair

In recent years, the Lower Omo Valley has received a lot of international exposure. Beautiful photos of the ethnic groups in their traditional gear have been splashed across travel and lifestyle publications all over the world. This has drawn keen photographers and photography enthusiasts in hordes and the people of the Omo Valley are absolutely jaw-dropping. Think intricately painted bodies, bare bodies adorned with detailed scarification patterns, massive lip plates, and animal skin attire. Add to that their penchant for assault weapons and you have some of the most naturally arresting people on earth. Though the region is inhabited by more than a dozen ethnic groups, the most important ones are Ari, Hamar, Mursi, Karo, Surmas, Tsemai, Daasanach, and Arbore. The Ari is the most populous ethnic group in South Omo. They also have the largest territory and are more westernized than the other groups. In rural areas, the Ari women wear their traditional attire made from banana leaves and hang beads and bracelets from their arms. Hamar is another significant group. Traditionally pastoralists, they speak one of the Omotic languages unique to South Omo. Their women wear plaited ochre coloured hair and leather skirts embroidered with cowries. Intricate body scarification is popular between both the sexes. The Hamar is famous for its manhood initiation ceremony that is held over three days. Known as the bull-jumping ceremony, this event is traditionally held between February and April, during which young men jump over 15 to 30 bulls naked. It is a Rite of Passage into becoming a Maza. Mazas are men who have successfully passed through this rite, become mazas or the “official whippers” and are allowed to marry. Another brutal Hamar initiation ceremony is the bride whipping rite. Known as Ukuli Bula, Hamar women invite the mazas to whip them to display their integrity, love, and courage.

A Mursi woman with intricate scarification

The most famous ethnic group of the Lower Omo Valley is the Mursi. Their territory is located on the Omo and Mago rivers. Mursi women are perhaps the most photographed Omo Valley people. They are famous for the saucer-sized clay lip-plates that they insert into a distended slit between their mouth and lower lip. The size of the plate worn by a woman will determine how many cattle her husband must pay her family when they marry. A comparatively smaller group, Karos are one of the most interesting ethnic groups of the Lower Omo Valley. Linguistically closer to the Hamer, Karo is renowned for its elaborate body painting, which involves spotting the body with white chalk paint and applying a rainbow of traditionally made pastes to the face. They live on the east bank of the Omo River.

Mursi women sitting outside their huts

The changes and the conflicts

Irrespective of their ethnic group, the Lower Omo Valley tribes live along the Omo river and are dependent on it for their livelihood. They have done this for millennia and have developed tried and tested complex socio-economic and ecological practices that are intricately adapted to the harsh and often unpredictable conditions of the region’s semi-arid climate. The annual Omo River flooding is essential for the thriving of the rich biodiversity of the region and guarantees food for the tribes. This is a low rainfall semi-arid region. The Lower Omo Valley tribes practice ‘flood retreat cultivation’ using the rich silt left along the river banks by the slowly receding waters. They grow sorghum (essential for their beloved sorghum alcohol), maize, and beans using shifting cultivation and also hunt game and fish for food. Cattle, goats, and sheep are vital for their existence as most tribes’ livelihoods depend on the production of blood, milk, and hides. Thus bridewealth comes in form of cattle and all parts of the animal, including the dung, are used by the tribes. Cattle are stockpiled as an important defense against starvation when the rains are erratic and crops fail. On certain seasons, families often travel to temporary camps to provide new grazing grounds for their herds to survive on milk and blood from their cattle during the harsh month. Cattle form the center point of their existence. The Bodi sing poems to favourite cattle and tribes often have deadly inter-ethnic group conflicts over cattle raiding. This has become more intense with the introduction of firearms and warriors who have killed men are the pride of his tribe. In the Lower Omo Valley region, you either live peacefully or fight to kill, and to comprehend the lifestyles and worldview of the tribes, all modern-day judgement needs to be suspended. This is a land of primal existence.

Today, this beautiful savannah region of the Lower Omo Valley is under threat. A massive hydroelectric dam project threatens the livelihoods of the tribes of the Lower Omo River. Associated land acquisition for farming projects and two national parks are shrinking their territories. The booming brash mass tourism is having adverse effects and much of their traditions and cultures are being diluted. However, it is not just the Lower Omo Valley, but the whole of Ethiopia that is undergoing radical changes. These are forged ahead by Abiy, who “wants the country to develop and leave behind its past of famine and poverty”. In these uncertain conditions, the question regarding their future, both existential and cultural, remains unanswered. Only time will tell if the thousands of years old pace of life here will continue following the mood of the river – sluggish and peaceful or destructive and violent or if the dam and the inevitable climate change will overwhelm the unprepared tribes with unexpected and untimely floods. Whichever way life takes them, the Lower Omo Valley people will never again go back to their pristine primal nature-based existence. Their Garden of Eden has been spoiled forever.

Mursi lip plates for sale for the tourists

Crocodiles basking in the Omo River

Inside a Hamar village

A Hamar man with his assault weapon

A Hamar mother and her child

Changes brought about by money and tourism