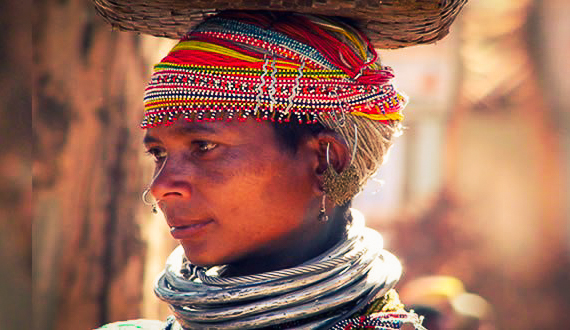 Towards the Onkadeli market of the Bonda people

I stayed at Jeypore before proceeding towards Onkadeli, the weekly market of the Bonda people. This town was a pleasant surprise. One of the oldest and most prominent cities of Odisha, it is tucked away in the Eastern Ghats and has a rich royal history. though not much of it remains. Dense forests, waterfalls, and lively tribal culture make up contemporary Jeypore‘s urbanscape and it sees a moderate amount of tourist footfall. Being located very close to Chattisgarh and Telangana states, Jeypore is home to many government offices, colleges, and research centers. That is why the local hotels are much nicer, cleaner and professionally run and the city has a lovely mixed linguistic culture. Interestingly despite being so regionally important, Jeypore retained a charming lost world feel. Droopy banyan tree tunnels, lively tribal markets, and hilly forested roads made the largest town of Koraput district of Odisha a very likable place.

This is the beautiful Koraput district

The Bonda people of Koraput

I liked Jeypore a lot and was happy to make it my base for the next few days. That night, post-dinner Sarat prepped me for my upcoming visit to the famous Onkadeli market and I listened to his strict instructions with open-mouthed amazement. The Onkadeli market is used by the famous Bonda tribe and they were quite well known for their hostility towards outsiders. Belonging to the PTG (Particularly Vulnerable Tribal Group) category, the Bonda people are found only in the undivided Koraput area (Khairput area in Malkangiri district) and are perhaps one of the most photogenic tribes of India. The ladies of these rather small-statured people adorn their bare bodies with multiple corals and antique coin necklaces, hollow aluminum and bronze neck rings, metal bangles, intricate ear studs, and hoops. Coin finger rings and elaborate headgear on their clean shaved head complete their attire and the only piece of cloth they sport is a tiny loincloth made from the bark of a local tree.

A heavily beaded belt holds the loincloth in place and they tuck a weapon or two inside it. On market days because of the exposure with the outside world, the Bonda ladies throw blue wraps over their bare backs, which they otherwise keep naked. Their men also wear a loincloth which covers only the front and they always carry multiple weapons on their persons. An axe always adorns their shoulders, along with a dagger, a sheaf of arrows, and a bamboo bow. In the past, these poison-tipped arrows were generously used and even today, the Bonda people are famous for being extremely hostile, pugnacious, and heavy drinkers. Due to gradual commercialization and growing contact with the outside world, the Bonda women have become friendlier over the years, but their men remain mostly hostile.

With such jaw-dropping photogenic opportunities, it seemed a bit sad that photography was strictly not allowed at the Onkadeli market. However, the heavy insurgent infestation of the area made the situation pretty grave. Despite, all the troubles, Onkadeli was a very busy market and residents of the neighbouring Telangana state frequented it too. They were joined by the Bonda, Gadaba, and Mali community people and each tribe were more eye-catching than the other. Held every Thursday, near the interstate border of Odisha and Telangana, the Onkadeli market of the Bonda people required a long drive from Jeypore and it was a beautiful journey through the pristine hinterland.

That morning dawned bright and beautiful and Jeypore was veiled with soft swirling mists. We left the city early to go with our long drive and the morning air was soft and scented. Flowers bloomed riotously scenting the air wild and huge patches of agricultural fields lay dappled in green and gold. Sarat, seeing my curiosity, stopped at a tribal village en route and we went for a walk around the hamlet. The village was called Janiguda and belonged to the Paraja tribe. It was big and well planned with a headman who also doubled up as the priestess. Fully equipped with a functional school, medical clinic, and a ration shop, Janiguda looked thriving. Huge tracts of government-allocated cashew nut plantations stretched around it and the villagers engaged in agriculture heavily. Animal husbandry, black pepper farming, and forest development work also seemed to be in full swing and large signboards proclaimed them to be government-funded enterprises. Deep connection with nature, being the essence of tribal life, the local government introduced the projects to help them be financially independent. It was an alternative perspective, something different from the usual deprived, exploited image of the tribal society.

Signs of integration into the mainstream

En route to Onkadeli market, if time permits, do stop by at the small Gunie Pada school in the Lamataput area. It is a residential school for the tribal children and the visit is guaranteed to be eye-opening. The entire education system, method of learning, etc are based around nature and the residential nature prevents children from skipping classes. Squeaky clean and fully equipped with learning materials, Gunie Pada school is just another example of progress in the tribal communities. Though slow, but steady, modern development has reached many of the tribal villages of the area and in spite of their clinging onto traditional lifestyles, the indigenous communities had access to bore wells, schools, medical dispensaries, modern toilets, and special housing loans.

The morning of the

With its neat rows of students

Made me see the Adivasi lifestyle

And its deep connection with nature

With a clearer perspective.

It is a culture embedded with sense, values

And gratitude to nature.