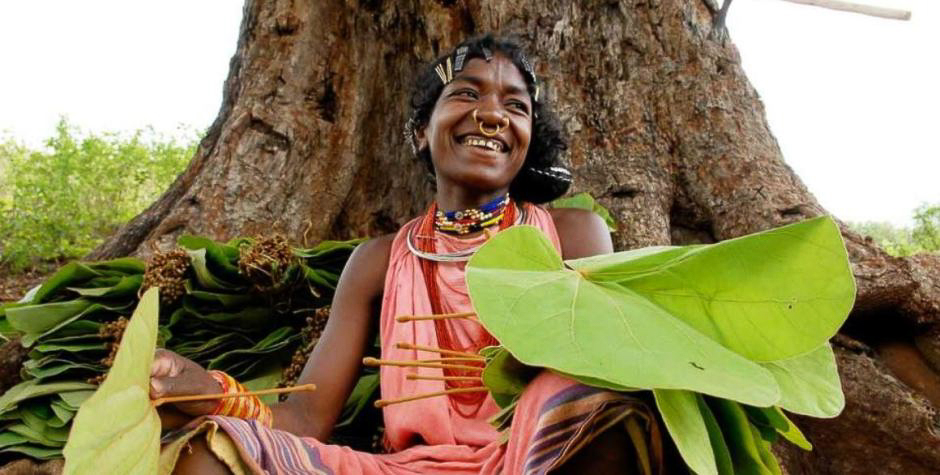 The Dunguriya village was tucked away in the depths of the Niyamgiri hills. Clean swept dirt alleys lead inside the village and a curious band of villagers followed us. The houses were made of mud, brightly painted with thatch or tin roofs, and were spotlessly clean. Several roofs held reed trays of wild ginger set out to dry. Huge mud-plastered reed containers held rice inside the rooms and reed baby bassinets swung inside little verandahs. Electricity had reached that village a few years ago and several homes proudly displayed obtrusive dish TV antennas. Shiny well-maintained motorbikes stood outside the neat rows of houses and women came out of their homes, with babies straddled on their hips.

A hand-painted house in the Dunguriya village

The Dunguriya women were exceptionally pretty. With bold dark eyes, vivacious smiles, and an elaborate style of dressing, they did not need any adornment, but they were bejewelled enough to attend a party. Beaded coral necklaces fell in loops around their necks and hollow aluminum rings covered their shoulders. Tattoos were artistically scattered on their chins, foreheads, and outer tips of their kohl-lined eyes. I was bedazzled by the way they looked and stared at them as they went about doing their housework, dressed so painstakingly beautiful.

They were a friendly bunch and offered me hollow gourds of salap (homemade sago palm wine). Their main festival of Baliraja Balirani was coming up and preparations were in full swing. Every community member came out of their homes to help in the preparations and they were singing, clapping, and laughing to musical beats. The activities were grouped at a spacious village square and a strange rectangular house stood alone in the middle of it. The empty building contained nothing except for a wooden beam with two breast-shaped carvings and a large headstone type of platform stood outside the hut. Fresh red flowers were scattered on it and incense sticks coiled perfume in the air.

Animism in the indigenous culture

It was the sacred sacrificial stone of that village, the holiest of the holy spots in tribal culture, and the root of their shamanic beliefs. Most of the world‘s indigenous communities believed in animism and the Dunguriya people were no different either. They worshipped nature and all essence of it. Trees, sky, rocks, water, sun, etc fill their world of spirituality and their existence revolve around it. Mother Nature is revered as the holy spirit and it was uncannily similar to Aiwa in the movie “Avatar”. The wooden breast-shaped beam was in fact their holiest deity-Mother Nature and the childlike simplicity of their faith made me smile.

In a world going crazy over-complicated religions, their pure animist beliefs which revolved around existential factors seemed sensible and practical. Suddenly it made me aware of my own urban life and I wished our things were as refreshingly simple as theirs. We stayed with our Dunguriya hosts until late afternoon and after lunch started our journey back to Bissamcuttack. Going back was not easy and we trudged down the dense forested hilly path until the Bissamcuttack railway station came into view. We started our onward journey towards Jaypore and my first day in the heart of the remote tribal belt of Odisha turned to be an overwhelming one. The drive to Jaypore was a visual delight and tobacco, mustard, and cotton fields bordered both sides of the road. The Eastern Ghats enveloped us in most parts of the journey and small nameless rivers flowed by quietly.

The Adivasi culture as we know it

I thought about the “Adivasi” existence and way of life during the entire drive to Jaypore. Basic, simple almost to a fault, their lifestyle was in close kinship with nature. Waking up every day at predawn for a day of backbreaking work, communal gatherings in the evenings, and living with stars, trees and flowers formed their daily routine. Dependent on off the field/freshly gathered/hunted food, natural medicine, and therapies, even organic wine and cigars, their whole lives revolved around nature and it was no wonder that they, worshiped her as their nurturer and protector. Though with recent introductions of modern amenities, medicine, and education system, the tribal life has changed rapidly, yet somehow the core essence of their “Adivasi “primal existence” remains the same.

This is a land primal and timeless.

And the reality of the forest dwellers

As romantic or sentimental as I may sound, I was not wholly unaware of their precarious social conditions and the blatant human rights violations they faced. I often wonder, why the urban societies feel that they have the right to hold these communities in condescension and coerce the state to strip them off their heritage, culture, and even ways of life. Is it the primal human fear of the ‘people different from us’ that force them to do so or the unsupported belief in their own superiority? Whatever the reason may be, my own urban mind could not but believe in the benefits of their lifestyle and wished that someday, they may introduce in our lives some essence of their harmonious existence with nature.