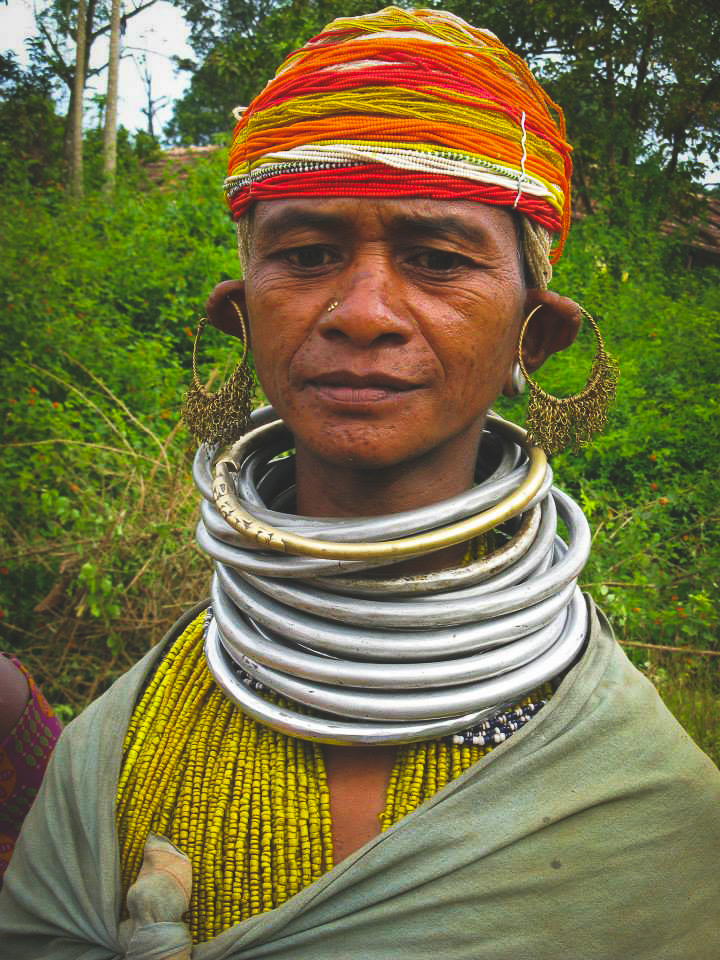 It took around 2 hours from Jeypore to reach Onkadeli. The distance was just 80 kilometers and the drive was beautiful. Koraput is a beautiful district and the morning weather was mild. The Onkadeli market arrived around 9 am and Sarat and I could hear it long before we reached there. Blaring horns, a gaggle of voices, and excited shrill laughter rose above the din of hens, scampering feet and clashing of metals. The Bondas saw me before I saw them and I quickly got surrounded by nearly bare naked ladies offering their tribal jewelry and handmade lemongrass beaded chains for sale. A few had hens struggled under their arms and they were really very short-statured.

The Bonda women of Onkadeli

I am a very petite person myself and the Bonda women had to look up to meet my eyes. Though a bit pushy, they were a gregarious bunch and I bought a few strings and hoop earrings to make gestures of friendship. That worked very well and soon, we were walking with them all the way to the nearest village. The nearest village was not near at any cost and after quite some time of crossing streams, pineapple fields, cashew forests, and agave groves, we reached the outskirts of a small clean hamlet. Marijuana clumps grew thickly around it and dried lemon grass-thatched the basic mud huts. Several large trees held pots for ancestral offerings within their hollows and army presence could be keenly felt everywhere.

A Bonda mother and a baby

The Bonda village, though equipped with most amenities was not as clean as the Dunguriya homes and the most prominent structure featured their main deity, Pathakanda. It is shaped like three swords and is highly revered by the Bondas. In fact, the Pathakanda festival held in February or March is one of the most important events in that region. The Bondas seemed to be extremely industrious folks and in that village, their women were busy weaving their loincloths, sorting their gathered medicinal plants, making sargi (bowls from green leaves), and keeping watchful eyes on their young husbands. The Bonda ladies traditionally married Bonda men who were of half their age and they took care of them till their husbands attained adulthood. This tradition is in hope that in their old age, the still young husbands would take care of them.

The Bonda way of living

The Bonda men, however, did not usually live up to the expectations and they drank, flirted, slept around, and fought till they died. Fighting is a constant feature in every Bonda village and the biggest reason is stealing of salpi, their favourite homemade wine. Very few things mattered much in a Bonda‘s life and salpi ranked at the top. Still being an extremely vulnerable group, the Bondas being till today shunned modern medicine, preferred to give birth in flowing streams, and bartered jungle fowl in exchange for poultry chicken on market days. The Onkadeli market clamoured with Bonda shoppers bargaining hard to barter jungle products for modern ones and they traded much with the Gadaba and Mali people.

The Gadaba women and their neck rings

Also, frequent visitors to the Onkadeli market, the Gadaba, and Mali tribal communities waned in brilliance in comparison to the Bondas. The Malis are strict vegetarians, who sported basil bead necklaces and decorated themselves with tattoos and sandalwood paste designs. The Gadabas were more photogenic with their multiple neck rings, beaded hairbands, and large copper earrings. They too were heavy drinkers like the Bondas and on market days made a beeline to the alcohol shops, after work. In fact, the sight of tribal ladies with babies on their hips drinking wine from bowls or hollow gourds is a very common one in that area, and sometimes, entire villages passed out on market days.

The myth of Duduma Waterfall

As interesting as Onkadeli was, the return journey to Jeypore was even more beautiful and the pristine countryside held hills, ravines, and forests in its depths. Uncountable mythological stories were based on that area and we stopped at Duduma waterfalls to walk all the way down to an ancient Shiva temple. Footsteps of Lord Rama, a Hindu mythological hero are supposedly embedded on a stone there and he had stayed on that spot with his family during his exile. Incidentally, it is locally believed that Sita, Rama‘s beautiful wife had put a curse on the Bondas and had stopped them from evolving with modernity. Mythology seeped from every part of that strange wildland and it was as beautiful as freedom.

The next day, we briefly visited the bustling Kundli market the next day and this was bigger, more modern, and crowded. Patronized mostly by the Parajas, Malis, and other modern tribes, Kundli was more of a rural bazaar than a tribal market and it was full of colours, easy laughter, and busy wholesale commerce. That was my last day at the Odisha tribal belt and the next morning I was leaving the lost world of Koraput behind. It had been an enchanting journey that took me to another space and time and introduced me to the remote interiors of a very beautiful,  uncrowded  India.

Where to base yourself

Other things to Remember

And their beautifully unique culture

made the Onkadeli market come alive

Along with the Gadaba people.

It was filled with excited shoppers

A real celebration of

As its surrounding landscape.

A remote and pastoral

All the way to

It was my last stop

The beautiful and rich