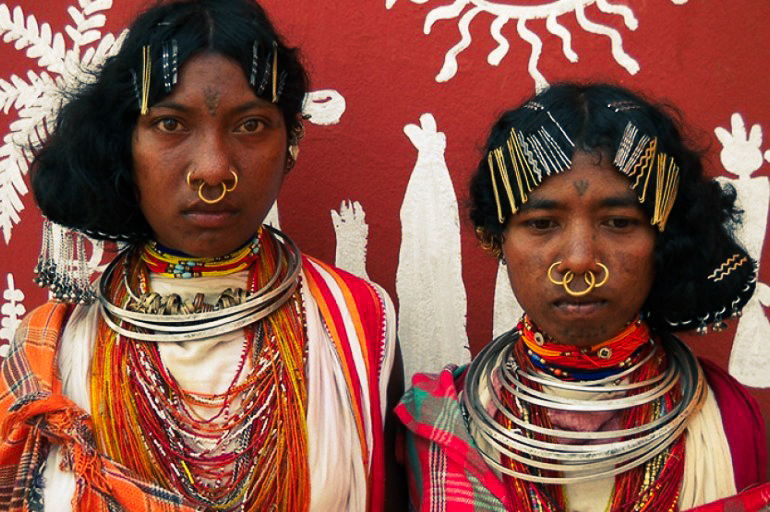 Tribal Odisha and its richness and controversies

My offbeat tribal Odisha trail started with the Chatikona market. Well, actually, the journey started off in Rayagada and the highlight was the weekly market. I caught the overnight Hirakhand special train from Puri to reach Rayagada and reached my destination at pre-dawn. It was around 4 in the morning, pitch dark with a handful of stars glittering coldly and I could only see glowing red ends of cigarettes moving on faceless crowds on the platform. At the time of my visit in 2014, there was no electricity (there was a power cut-off) that plunged the whole platform into complete darkness. Suddenly from somewhere, somebody clutched my hand. I nearly screamed out loud, when my guide Sarat Routray welcomed me to the tribal belt of beautiful Odisha.

Being welcomed to tribal Odisha

He was a kind, friendly man with affable manners and I immediately felt at home. He guided me along the railway tracks with the help of his flashlight, all the while describing in detail the tribal Odisha itinerary that he had planned for me. We trod across the railway tracks for some time exchanging our indigenous community experiences until the main road of Raygada town blazed in front of us. It was a sudden explosion of light and I squinted blindly at an ugly little town. Lights shone from everywhere, hurting my eyes with the naked glare and I found myself checking into a small inn. It was a ghastly place that faced a noisy busy motorway and I tried to get comfortable on a rough bed until clear dawn broke open the dark night. The sun rose rapidly and Sarat and I walked out in search of breakfast. Fried Indian bread called puris were being sold from every hand-pushed cart along with freshly steamed south Indian rice dumplings called idlis and the strange combination of the north and south Indian dishes made me realize my geographical position.

The beauty of these regions

The tribal Odisha belt shares a border with the southern states of India and a heavy South Indian influence could be seen in just about everything. Raucous south Indian film music blared from ramshackle roadside eateries and women with flowers in their hair went about their daily tasks. There were some North Indian traces too and Rayagada being an important transit point for trucks carrying Odisha‘s mineral wealth throughout the country, was a pitstop for drivers from all over India. The town‘s streets were lined with vehicles, inns, eateries, garages, and urine and petrol stench covered everything like a thick blanket. Needless to say, I disliked Raygada immensely and breathed a huge sigh of relief, when Sarat arrived in a sturdy rental car. We immediately started our journey and the landscape became magically beautiful, the moment, the city limits melted off. It was a beautiful young morning with an unbroken road stretching happily through a stunning countryside of tobacco, cotton, and sunflower fields. Pristine beauty stretched all around us, bordering both sides of the road until it ran into the silvery hill-bound distance.

The beauty of the tribal Odisha belt met my eyes immediately and their childlike simplicity left me speechless. It was a market day; the most special day for indigenous communities, when entire families walked for miles carrying on their heads, baskets of fresh produce, kindling wood, babies, chicken, and pots of homemade wine. We passed through troops of laughing gay ladies on the way and eggplants, pumpkins and tomatoes tumbled out from their fat, happy baskets. They waved, smiled, and chatted with Sarat every time we stopped under flowering mahua trees. Fresh young summer with its balmy heat made these enchanting giant trees burst in blooms and their intoxicating fragrance attracted bees in hordes. In the morning light, rural remote Odisha looked placid and soul soothingly peaceful.

The controversies of tribal Odisha

We drove for some time through a remote glassy smooth road, heading diligently towards the famous Chatikona weekly market. Located near the Bissamcuttack railway station, it is definitely a ” Not to be missed tribal Odisha market”. The flamboyant Dunguriya people gathered there for their weekly shopping and they were joined by equally spectacularly attired Desiya Kondh groups. Apart from their gorgeous culture, strong religious common grounds tied both the communities together and then there was the awe-inspiring tale of Niyamgiri Hills. Revered by the residing Dunguriya and Desiya Kondh tribes as the life spring of their existence, the Niyamgiri Hills of Odisha is rich in the mineral bauxite. This caught the interest of the UK-based mining giant, Vedanta, and they, along with the local government forces were all set to strip the hills off their natural resources. This meant, denuding the forests on and around the area of the hills, breaking down Niyamgiri into bauxite ores, and eventually violating the homes of the Dunguriyas. For the Dunguriyas, who lived there, clearing off the Niyamgiri Hills entailed not only the destruction of their homes but also their deity Niyam Raja’s abode. This meant breaking off their spiritual connection with their souls, their ancestors and exploiting their social, cultural, and religious rights. They loved the hills more than their lives and fiercely opposed to its destruction. This battle raged for nearly 10 years until the Dunguriyas chose death over the destruction of the Niyamgiri.

The good over the evil and the battle rages on

Finally, on April 18, 2013, the Supreme Court gave a clear verdict that mining clearance of Niyamgiri Hills can only be given if the gram sabhas (village councils), comprising Dongrias, agreed to the project. In what is stated as India’s first environmental referendum, all the 12 tribal Odisha villages selected by the government voted against the project. So, the Supreme Court of India ruled in the favour of the Dunguriyas, with immediate order to stop clearing the forests around the Niyamgiri Hills and the victory of the downtrodden Indians rejoiced throughout the country. Although the Vedanta verdict showed some positive signs for the downtrodden, the bauxite rich Niyamgiri Hills controversy did not end there. Ever since the Dunguriyas community turned down the Vedanta mining proposal in 2013, it has found itself in the crosshairs of the State government.

This is a land primal and timeless as time itself.

Simple to the point of rudimentary,

This is the beauty of tribal Odisha.