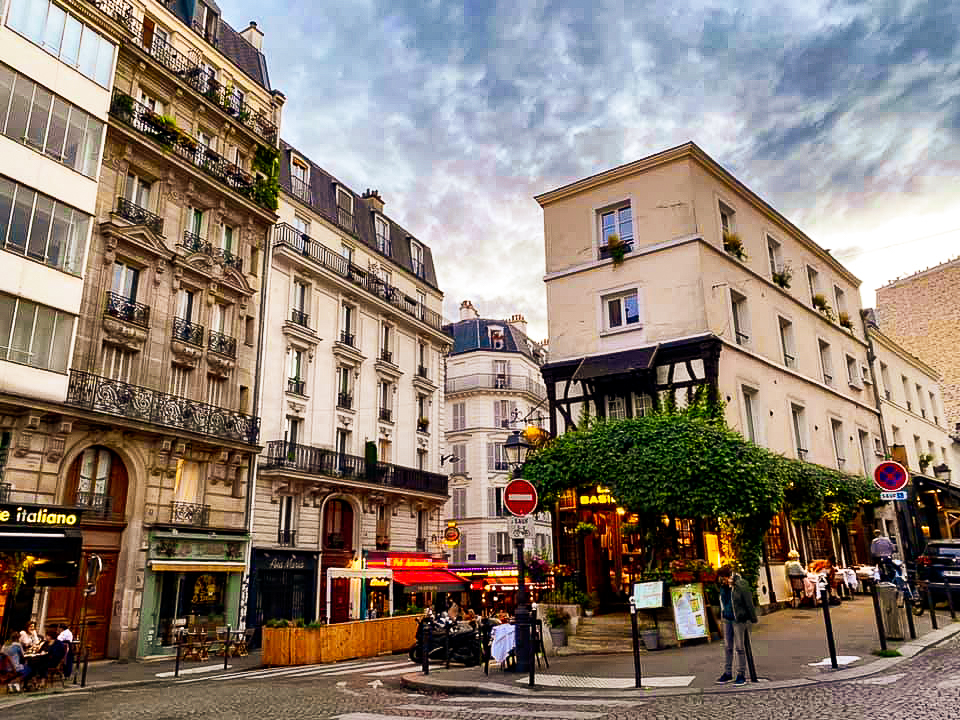 The cliche and intrepid in Paris

I was in Paris this summer. I went there to heal a broken heart. Sounds like a cliche, doesn’t it? But that’s exactly how things were. I remember tears flowing down my cheeks as I boarded the Thalys in Koln Hauptbahnhof. The year had been tough on me. It brought all sorts of illness, injury, personal loss, and family issues. To top them all, there were deceit, lies, and other nasty stuff in my personal life. Long story short, I was a complete nervous wreck when I reached the Gare du Nord and did not notice the beauty of the building at first glance. Now in normal circumstances, that is unusual for me since I like noticing beauty and beautiful details around me. But then as I said, I arrived in Paris to heal heartbreak and the first step to that is good food.

So after a hearty ‘American’ steak and fries dinner (can it get any more cliched than that?), I flagged a taxi for my Montmartre hotel. The rakish young taxi driver who was from Algeria or Tunisia or some other French-speaking nation charmed me with his pretty manners, gave a running commentary of the places we passed, and overcharged me with a smile. I had still not recovered enough to get a grip on the situation, but I started getting conscious of the beautiful surroundings.

I noticed the timeless Paris sights: stylish swagger of the residents, cigarettes sticking from painted lips, the excited gaggle of tourists – except that their cameras had been replaced by selfie sticks, crowded sidewalk cafes, and golden sunlight filtering through the Haussmannian buildings. The streets were narrow, crowded with traffic, and people jaywalked. There was an energy in the air, that was suave, streetsmart, and edgy. It was a world apart from Germany and I already missed Koln’s wide streets, wide pavements, and organized traffic. But that was Paris; at least an aspect of it, that attracts — its fiery nature, its rebellious spirit, and its penchant for beauty, freedom, and national pride. The Parisians seemed to walk with their heads held higher, their cheeky flirtatious words were more confident, and they definitely had chips on their shoulders.

A cafe in Montmartre

I spent a few days in Paris at that time; walked a lot, ate many French dishes, and spent hours traveling through the city on the Metro. Parisian metro seemed to recognize the human fallacies better than the German counterparts. In good solid Deutschland, you can board public transport without buying a ticket and pray that the ticket checker doesn’t arrive. In Paris, however, you cannot even enter a Metro station without buying a ticket first. This made me smile. It was typical of the French to acknowledge the cheekiness in human nature and be prepared accordingly. It was a plain matter-of-fact acceptance with no naivety involved. No ‘we trust you will buy the ticket and not cheat’ innocence. Just a tarty pay and go, ‘you get what you paid for’ attitude.

The stylish side of Paris

The human layers of Paris

All these subtle details about Paris charmed me. I liked going through endless Metro journeys; taking in the local sounds and smells; seeing the people’s attitudes, ethnicity, clothes, and voices change with different stations; and mingling with the crowd. I noticed for example that the number of African mothers pushing prams or carrying infants bound to their backs was higher in Basilique de Saint-Denis station, while at the Madeleine, there were mostly stylish white professionals or exceptionally beautiful Asian women in dazzling garbs. In the same manner, the crowds changed with the streets. Their voices either grew shrill and loud or became lazy and drawling. They either carried groceries baskets or shopping bags from premier departmental stores. Their priorities changed too. On some streets, tired women dragged shopping carts on wheels while in others young girls with backpacks and cigarettes talked on their expensive phones. The cafes changed their character along with the neighbourhoods. While in some arrondissements, little rattan tables held sheesha and backgammon boards, in other quarters, chairs cradling velvet cushions clustered under striped awnings.

I watched all of these things, breathed in Paris in many of its moods, enjoyed its people, and in due course, felt better. The luxurious side of Paris, however, was hard to miss too. So I frequented some very sumptuous restaurants, went to the Opera, and watched a cabaret show in Montmarte. I could not enough of both. There was a constant struggle between the local and the cliched sides of Paris and I gave in to both with equal interest. Thankfully, the weather was perfect at that time. The sunshine was bright, the sky was blue, and there was not a single drop of rain. From my hotel window, I could see pink sunsets over the Sacre Coeur, and in the evenings, sounds of revelers floated in from the street. Not once did I step into any of Paris’s famous places and not once did I regret it. That was my Paris visit — edgy. grungy, sumptuous, and a constant struggle between the offbeat and the cliched. How was yours?

Rue Crémieux in the 12th Arrondissement

Inside the Palais Garnier

A beautiful cobbled street in Paris

And lots of French food.

That was Paris for me.