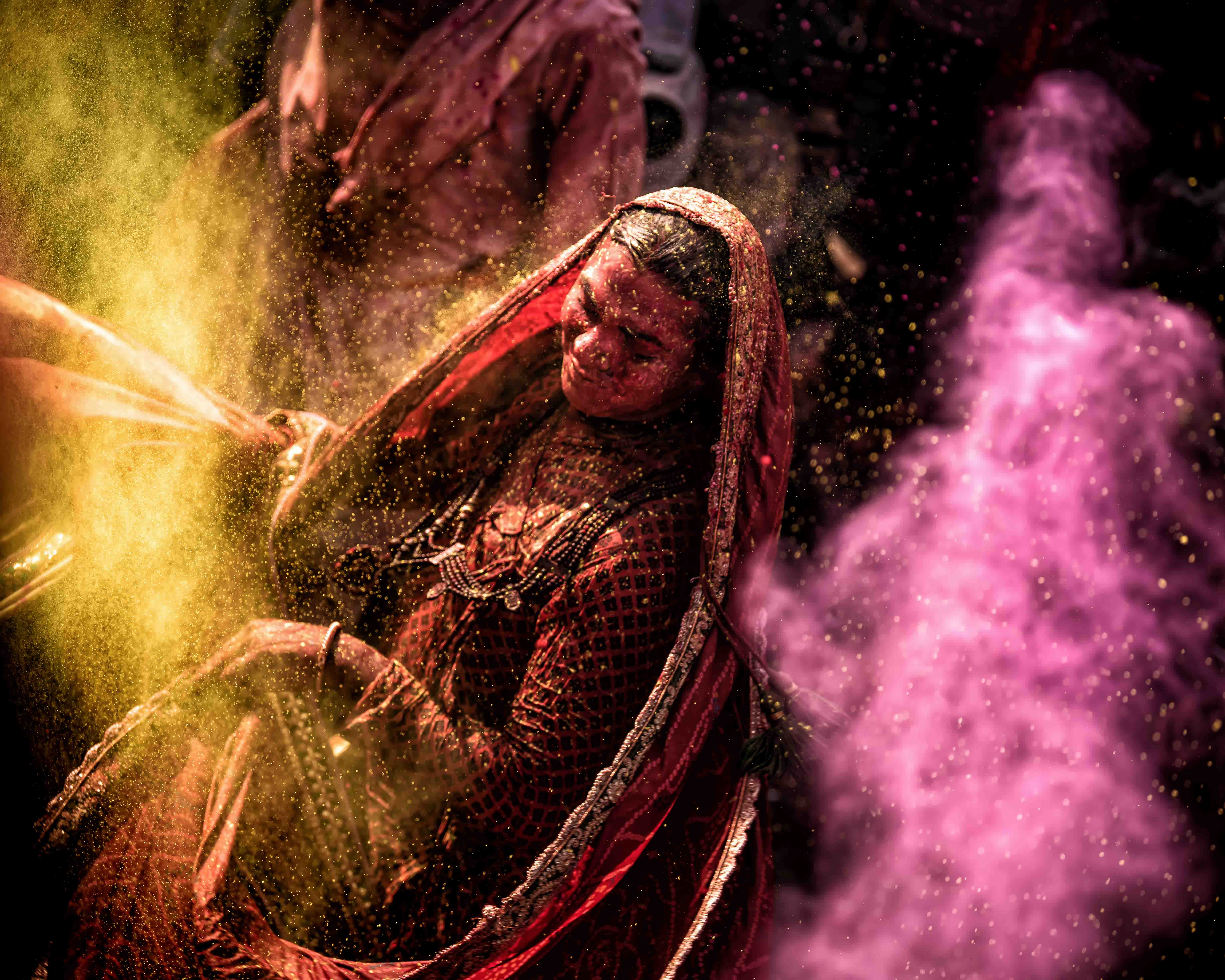 “A woman dances away in bliss, a sublime smile playing on her lips: a group of men painted pink, green, yellow, and red, congregate in a joyous circle, their joy pouring out for the world to see; a foreign couple splashed in techicolour stares at each other in a silent embrace as the humanity around them reverberate with action, her eyes seem to say, “I can’t believe that I am sharing this with you; this special moment that will forever remain with us”, feminine foot pads softly on liquid magenta, its heavy silver ankles dripping coloured water, and puffy powdery clouds of colours light up a courtyard filled with expectant happy faces.” I am experiencing Holi, one of the loveliest festivals through the eyes of someone else; someone who has always struck me as what we call in India a “bawra”. Although literally meaning a crazy person, ‘bawra’ is a very endearing term referred to those eternal mystics, answer seekers, and learners. Incidentally, ‘Bawra’ is a Sufi word meaning a poetic wanderer lost in a state of wonder and meditation and that is what I believe Mirza to be.

An image of Holi celebrations at Nangram Temple, Nandgaon during Braj Ki Holi

Festivals are connected with life and celebration

Mirza Tariq’s Holi festivals photographs transported me to Holi, something that I have never really celebrated as an adult, his energy, his joie de vivre behind those pictures is quite palpable and I see Holi in all its glorious beauty. My memories of Holi in comparison are childish and they date back to a time when the highlight of the festival afternoon was wearing our oldest clothes, filling water balloons with coloured liquid, and spraying everyone with our thin, plastic water pistols. “Splotch splotch”, the water balloons would burst upon landing on the streets below and as kids we nearly always missed our marks. However, that did not deter us and we would continue with the revelry until it was time to get scrubbed clean by our mothers and sit down for the festive feast of phulko luchi (fluffy fried bread), spicy alu dum (potato curry), and pathar mangsho jhol (young goat meat).

Photographer Mirza Tariq in a spiritual bliss among festivities of India

My memories also remind of another time, when my best friend Ali would help me and my mother prepare for the household Lakshmi Puja for which she would reward us with an extra helping of coconut dumplings (narkel naru) and he would never eat his Eid feast without me. Those were days when India seemed like a village; a place where everybody lived in harmony and no one questioned our religion in public. In fact, for a very long time, we, the 80’s children did not even understand the difference and celebrating all festivals with equal fervour seemed natural to us. A festival was a festival; period; it was a time to enjoy a holiday, spend all day with friends, eating, talking, and having fun. What did it matter what religion it belonged to? Our childish selfish minds only took the good and ignored the bad. I was discussing this with Mirza when we Skyped recently to talk about his Holi pictures. My own memories, feelings, and thoughts reverberated with his and all of a sudden, we felt lost in our own country.

India’s festivals through the eyes of the modern Raskhan

I came to know Mirza through a social media platform. His festivals photographs caught my attention and the quiet, sadhu-like humble artist interested me. Over a year or two, we followed each other’s work diligently and it was by a sheer unfortunate turn of events that we missed meeting in Delhi on my last India visit. That, however, did not dent our mutual admiration and when we agreed to work together, I was elated. I have always wanted to know the artist behind his award-winning photographs and recognize the truth he seeks. From his much applauded social media posts and photographs, Mirza seems to be everywhere; observing, connecting, celebrating life, and seeking. It was his search that interested me a lot and I wanted to know what he sought. So I poured forth my curiosity, searched into his artistic soul and here is an excerpt from our conversation. Though natural to our 80’s minds, in the present scenario of a secularly disturbed India, Mirza’s thoughts present a uniquely different perspective. It is an insight different from what is rampant on the media and so presenting the thoughts of a Muslim Krishna loving photographer; the modern-day Raskhan.

When religion was personal and festivals were public

Q1. Your posts and addresses start with “हर हर महादेव V”, “Radhe Radhe”, your photos literally burst forth with energy, and you seem to observe everything around you with equal measure..the street child, the flower, the monument, and a smile. Where you always so open and immersive? Tell us a bit about your growing up days that created this openness.

Sufism, a oneness of god and love for Sanskrit

Q2. Set aside a divided India of today and share with us memories of a truly secular India that made you into what you.

“Of Shruti, Puranas, Agamas and Smritis, Love is the essence of all. Without the knowledge of Love there is no experience of Ananda [bliss], Knowledge, action, and worship, all of these are the root of pride.” – Raskhan

Festivals mean a connection with humans to me

Q3. My biggest strength and inspiration comes from connecting with other humans. I seek knowledge and everybody provides me with clues to my answers.

“When the traveller on the mystical path begins to understand the nature of true love, then external rituals and bonds begin to lose their meaning for him. The rules of the world, the Veda and the world, shame, work and doubt, All these you give up once you practise love, For what are regulations and negations when compared to Love?” – Raskhan

20 years ago, when I started my professional career as a software consultant, my life took a huge change and for 15 years or so, I got sucked into the corporate rat race. I traveled all over the world, changed my perspective about different cultures and involuntarily (and unconsciously) started getting closer to perennialism, Today, I understand that it was my curiosity that made me embrace human differences so openly even though my original ambition of wanting to do something for the grass root level people got lost. Then suddenly something good happened that I realize in perspective as a blessing; I lost my job at the peak of my career. That was the best thing to happen to me. Somebody introduced me to Vipassana (the spiritual meditation practice) and I finally found my path. I realized what I was seeking: that I need to connect with the grass-root level people and God is one and that spirituality is a universal selfless, boundless love. It is like the love between Krishna and gopis.

Photography for a cause

Q4. What drives you to photography and what do you seek behind a camera?

Festivals of India and what they mean to me

Q5. Keeping in mind India’s communal problems at the moment, how do you feel being so immersive in your country’s diverse celebrations? Are your interests purely artistic or are you also seeking an answer to the present communal confusions?

The dwelling of Love is Shrimati Radhika, the son of Nand [i.e. Krishna] is Love’s colour, Everybody says: “Love! Love!”but nobody knows Love.” – Raskhan.

Celebrating their love for Lord Krishna, a group of “Sakhi” dances during Holi, near Vrindavan

Stay put as we follow Mirza Tariq as he re-discovers love at the time of Holi, the spring festival of colour of India. For more stunning visuals, check out his work on his Facebook page: Photos by Mirza Tariq and on his Instagram Handle: MirzaTariq.Photos