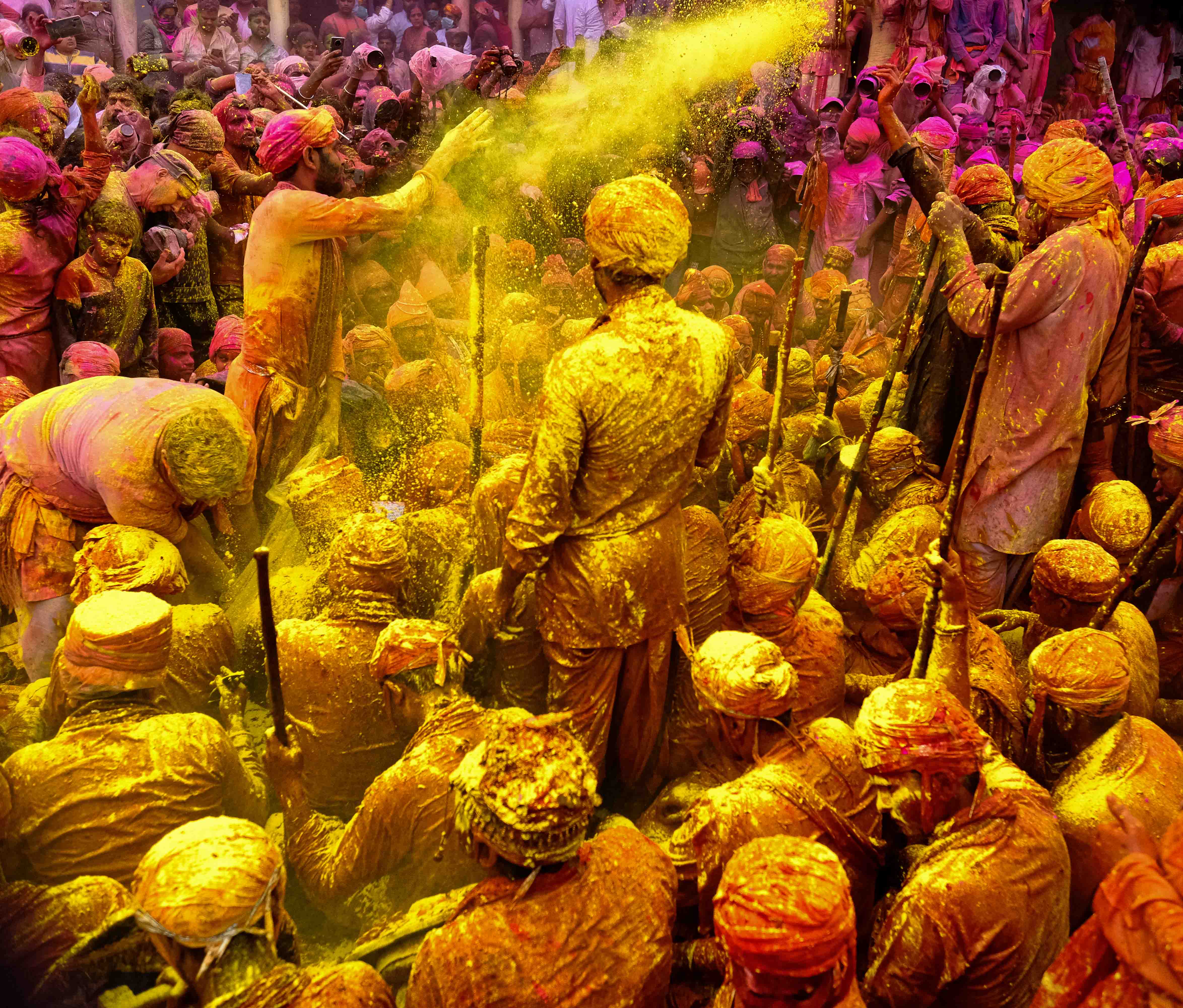 The beauty of Braj Holi: some memories and tips

My earliest Holi memories go back to my growing up days at the paramilitary camp where we stayed during my father’s CRPF service days. In those camps, all festivals are celebrated with equal fervour and as kids, Holi was our favourite. Playing with water is huge fun for all children and we used to celebrate Holi with lots of water, colours, and water guns. Those were good old days of innocence. My recent Holi experiences are mostly in the Braj region. In fact, according to me, the most beautiful place to experience and photograph Holi is the Braj region. When I say the Braj region, I mean the areas around Vrindavan, Mathura, and the adjoining smaller towns and villages like Barsana and Nandgaon. Lord Krishna is said to have been brought up in Nandgaon and it is also where he lived his mortal life. Barsana is believed to be Radha, his consort’s village.

Braj Holi is more than just a celebration

The mythological aspect of these two villages adds more charm to the celebration of Holi, a festival considered by many as the spring festival of love. The eternal love story of Radha and Krishna is much enhanced by miniatures showcasing the couple’s Holi games and this connection perhaps adds zeal to the Braj residents’ Holi fervour. For a documentary and a travel photographer, the energy that is palpable here is absolutely breathtaking and you simply cannot but get immersed in the Braj Holi celebrations. When I visited Braj for the first time in 2017 as an amateur photographer, I went totally crazy. The whole atmosphere, the vibes, and the energy were so overwhelming that I simply gave my camera to an accompanying photographer friend to join the festivities and started dancing with the villagers.

You may also like: FESTIVALS OF INDIA THROUGH THE EYES OF A MUSLIM PHOTOGRAPHER

Celebrating their love for Lord Krishna, a group of “Sakhi” dances during Holi, near Vrindavan

I realized that there is more to just the Holi celebrations in Braj; the people are warm and welcoming and you form connections for life.

However, for this, you need to often shed your photographer’s avatar and mingle with the people as fellow humans. Another thing that probably helps me connect better with the locals is that I always dress up like the “Braj-wasis”.a.k.a the locals. I wear a Kurta-Pyjama, put on a “Topi” (a local hat), similar to what they wear in Braj and tie a scarf around my waist (as is in this photograph). For me, this human connection made during Holi is very endearing and I have nurtured these intimacies on all my Braj trips. You see, experiencing Holi in Braj is not just about taking amazing pictures but to understand the local traditions, respect the mythological connection, and share that revered joy of the festival with the people. That is when you find yourself completely immersed and empathetic with the locals and they in return, accept you within their folds with open arms.

A visual captured during the “Lathmaar” Holi in Barsana Village. As part of the tradition, “Bhabhis” or sisters-in-law of Barsana hit their brothers-in-law or “Devars” from Nandgaon village with the “Laathi” or sticks.

The folkloric variations of Braj Holi

What makes Braj Holi so special is its duration. In most places, Holi is celebrated for just one day or two days i.e the Holika Dahan night and the main Holi celebration day. In the Braj region, however, it goes on for 8 to 10 days and many folkloric traditions are practiced. For example, the locals of Braj have many different variations of Holi like the Lathmar Holi, the Laddu Mar Holi, Phoolon ki Holi/Flower Holi along with the recent bold, progressive addition of Vidhva Holi or the Widow’s Holi (traditionally Hindu windows are forced to abstain from all celebrations). The Lathmar Holi, amongst them, is perhaps the most unique one and it owes its origin to a Radha-Krishna tale. As per the legend, in his days as a young man, Lord Krishna was mischievous and playful. He often visited Barsana, the village where his beloved Radha used to live. Once, days before Holi, the Indian festival of colours, Krishna visited Barsana with his friends and, together, they teased Radha and her companions. Taking offence to this, Radha’s friends chased the men away with sticks. Lath Mar Holi festival is a re-enactment of this legend.

“Bhabhis” or the sisters-in-law all set for Lath Maar Holi at Barsana village.

The famous Lathmar Holi of Barsana

On the day of Lathmar Holi at Barsana village, the men from Nandgaon reach a location on the outskirts of Barsana. They get battle prepared with headgear and protective clothing, sing ballads and slowly proceed towards the Radha Rani Temple in Barsana. They represent Krishna’s army. The women of Barsana prepare for Lathmar Holi for months ahead by oiling thick wooden staffs kept specially for this occasion. After their visit to the temple, the Nandgaon men reach the “Rangeeli Gali” (the central point for all the action in Barsana) where the fun starts. There is the usual jest to invoke some drama, after which the Barsana women start beating up the cowering Nandgaon men. This is an extremely dramatic, picturesque and difficult situation to capture. The costumes, the colours, the energy, and the action get overwhelming and then there is the danger of either getting hurt or having your camera destroyed if caught in the middle of this celebration.

A scene captured at Nangram Temple, Nandgaon during Holi celebrations.

Picture a courtyard full of people singing love ballads while swirling clouds of colours dance in the air. It is impossible to not feel the magic of the place right then and there.

The stunning beauty of Nandgaon Holi

Despite all this, for street photography there is a winning experience, not only because of the amazing shots you capture but also because of the way the locals welcome you. Many times, I have been invited by the villagers to their houses for tea, meals, and chats and they somehow remember the people they meet. I got recognized by the villagers on the next visits and the connection now is such, that some of them phone me before Holi to confirm that I will be visiting. However, as I mentioned respect begets respect and you need to be prepared to be more than just a visiting photographer looking for that perfect shot. If you ask me to choose between Nandgaon and Barsana, I will say that Nandgaon is more organized and the Holi street photography there is extremely rewarding. The best spot for Holi photography in Nandgaon is in the Nandgram Temple. This is because of the ample space on the temple terrace for the photographers to take their shots. Holi in Nandgaon is celebrated on the immediate next day after Barsans Holi. On this day, the men from Barsana come to play Lathmaar Holi with the women of Nandgaon. Around 4 PM, the “Samaj Kirtan” ceremony starts in the Nandgarm temple. In this ceremony, locals from Nandgaon village and Barsana village participate. They sing the love ballads of Radha and Krishna while showering the air with colours. Soon, the courtyard gets full of colours and it is one of the most stunning visuals in the world. The ambiance is also outstanding: picture a courtyard full of people singing love ballads while swirling clouds of colours dance in the air. It is impossible to not feel the magic of the place right then and there.

Vrindavan is another place to enjoy Braj Holi

The Bankey Bihari Temple in Vrindavan is another place to take great Holi shots. This place is, however, the most challenging since being a prime spot, thousands of visitors flock there and the chances of a stampede are quite high. Alternative places in Vrindavan for Holi photography would be Radha Raman temple, Iskon temple, and the Prem Mandir. There is also Vidhva Holi in a Vrindavan ashram in which the Hindu widows play with flowers. Flower Holi is celebrated in many Vrindavan temples and it is a magical sight to see people being immersed in ballads while throwing hands full of petals in the air. Apart from the Braj region, the two other places to experience Holi are Varanasi and Pushkar in Rajasthan.

Devotees singing the love ballads of Radha-Krishan inside the Radha Rani Temple, Barsana..

Know that its Holi. You and your camera are bound to get wet. So be prepared.

Our aim is to capture the moments, we cannot do it at the expense of interfering with their festivities.

Understand and respect the cultural sensitivity of Braj

The most important message I have to give to those aspiring to go on a Braj Holi tour is to respect privacy and be prepared to face slight hostility. This might come across as very hard especially if it is your first visit to the region. Many photographers complain of Nandgaon and Barsana locals to be often rude. This can seem like a bit of a turn-off. However, we have to bear in mind that it is their home turf, their culture and we are the outsiders. On too many occasions, I have seen photographers disrespectfully getting too close to get that perfect shot or pushing themselves in the midst of festivities despite being told to back off. These kinds of behaviour have created some hostility for photographers in general. Moreover, these are small villages that have close-knit communities. Now, imagine, thousands of strangers arriving there and invading their space, their festivities and many times, not in a respectful manner. We as their guests need to understand that it is not a staged show and we, photographers need to maintain a distance, a limit and not intrude in the local celebrations in a way that makes them uncomfortable. We need to be mindful of that and respect what they are doing. Even if, our aim is to capture the moments, we cannot do it at the expense of interfering with their festivities.

A moment captured during Holi celebrations at village Barsana

In the sweetness of friendship let there be laughter, and
sharing of pleasures. For in the dew of little things the heart
finds its morning and is refreshed.
― Khalil Gibran

Locals playing holi in the street of village Barsana

This article is based on the edited interview excerpts of ace photographer Mirza Tariq Mustafa. He is renowned for his festival based series and these are his experiences of the Braj Holi. For more stunning visuals, check out Mirza Tariq’s work on his Facebook page: Photos by Mirza Tariq and on his Instagram Handle: MirzaTariq.Photos