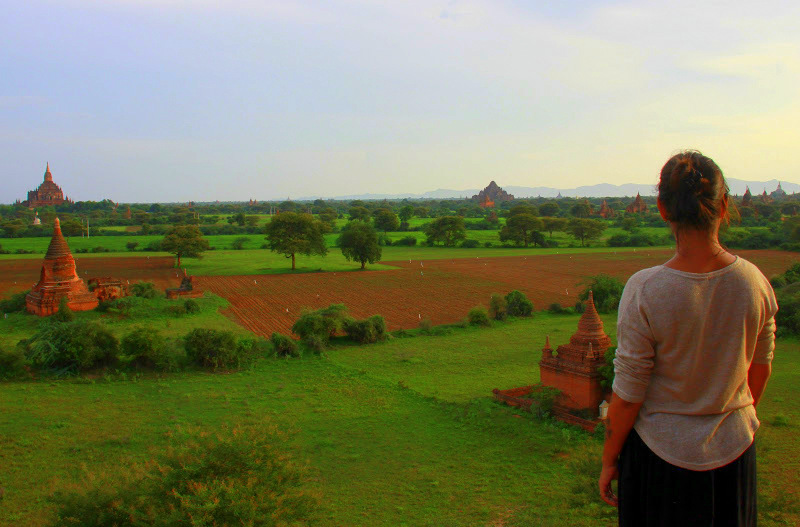 The unbelievable beauty of Bagan

Bagan is one of the most surreal looking places I have ever visited. Imagine tall terracotta temple spires and stupas dotting a vast, dusty red earth plain as the river Irrawady lazily meanders by. Now, add semi-arid neon green vegetation, timeless hamlets, floating hot air balloons, trotting horse carts and gorgeous sunsets to the entire scene. The result of this breathtaking combination is Bagan and it is undoubtedly one of the most photographed spots on earth. The beauty of Bagan’s sunsets/sunrises are legendary and the temple town is one of Myanmar’s most important tourist attractions.

The gorgeous skyline, sunsets, and frescoes of Bagan

Touted as one of the richest archaeological sites in Asia, the sheer scale of Bagan is staggering and the archaeological zone spreads over 67 square kilometres. More than 2000 Buddhist structures make up the Bagan Archaeological Zone and every temple, stupa and monastery is individually impressive. They are memorable for either their beautiful frescoes, their graceful structure or sheer architectural bulk which make them loom over the surrounding flat land. When put together, they create one of the most photogenic vistas and the fantastic combination of nature and archaeology of Bagan is perhaps comparable only to Angkor Wat of Cambodia in Asia.

Bagan is the crown jewel of Myanmar

I had visited Bagan last year during the dreaded monsoon period and though most of the sunsets had been washed out, the place had not failed to mesmerize me. The month had been June of 2015 when most of Myanmar or Burma had been inundated by heavy floods and only a few places had remained accessible and dry. Bagan, apart from being Myanmar tourism’s crown jewel, had been one such destination and hence, had been mostly sold out during that time. The bulk of rain stuck travellers had headed towards Bagan and Mandalay and I had struggled to find a seat on one of the domestic flights from Yangon.

The dusty plains of Bagan

The short (yet expensive) flight had been comfortable enough and we had landed at Nyaung U in no time. Bagan had been blistering hot, with the noon sun high in the sky and red dust had risen in soft clouds. The temple town had been located in the official dry zone of Mandalay region and my first sight of the famous site had been from the plane. The land that had unfurled underneath had looked vast and rural and it had been difficult for me to believe that once upon a time, a great civilization had called it home.

The terracotta temple of Bagan

A bit about the kingdom of Bagan

The kingdom had been of Bagan or Pagan, as it had been officially called and the town had been its grand capital. The era had been from the 9th to 13th centuries a.k.a the Golden Period of Burmese history when a tiny obscure settlement had risen to become one of Southeast Asia’s greatest empires. The Pagan kings had unified the region of Myanmar thus establishing the foundation of Burmese culture, ethnicity as well as Theravada religion in their empire and during their 250 years rule had built more than 10,000 stupas, temples and pagodas. This had been a huge display of their power and wealth and soon Bagan had morphed into a thriving nerve centre of politics, economics and culture.

You may also like: New Year at Angkor Wat

The cultural grandeur had attracted scholars and students of religious and secular studies from far and wide and the capital city of Pagan kings had offered scholarship programmes in grammar, philosophical-psychological studies along with astrology, alchemy, medicine, and legal studies. Students, monks and travellers from as far as India, Ceylon as well as the Khmer Empire had flocked to Bagan and this affluence had also, unfortunately, brought along with it the empire’s impending doom. Repeated invasions by the Mongols had finally crashed the grand kingdom of Bagan and the empire had collapsed in 1287. Sadly, the once bustling capital city of around 200, 000 residents had soon reduced to a sleepy small town and Bagan had never regained its former glories.

Bagan is breathtaking despite having fallen from glory

The area, however, had continued to be an important Buddhist pilgrimage site until devastating earthquakes had damaged most of the religious structures in severe states of disrepair. Today, only 2229 pagodas and temples of Bagan had remained intact and unfortunately, their “rude, unprofessional” restoration had robbed Bagan of a very justified UNESCO World Heritage Site title. This has, however not stopped Bagan from being popular among travellers and photographers from all over the world and it had been one of the few places in Myanmar, which had been seriously tourist oriented. The main area of Bagan had been commercially sliced into 4 parts and each had been aimed at a different category of travellers.

The modern revival of Bagan as a tourism hub

The dusty small town of Nyaung U, which had been Bagan’s transportation hub had a very rural feel and it had offered a wide range of accommodations for budget travellers. The traditional Mon-style lacquerware village of Myinkaba had been more of a shopping destination and many bamboo weaving workshops had been located there. The spanking clean New Bagan settlement had some lovely mid-range hotels and a few rivers facing restaurants had added to its charm. It had been, however the Old Bagan area which had sat impressively within the remnants of the old city walls and had most of the loveliest temples located all around it. Some of Bagan’s priciest resorts and hotels too had been housed there and every single one of them had either river access or great temple views or both.

The lost kingdom of Bagan

Bagan was a dream come true for me

I had not been aware of all these intricacies when my small Air Mandalay flight had dipped low over the historic plains and Bagan had appeared like a magical vision. Visiting Bagan had been a much-awaited dream for me and I had wanderlust after the Myanmarese beauty after seeing a photo of its incredible sunset. Ever since for years, I had quietly worked towards achieving the travel bucket list and so, my excitement had nearly brimmed over the moment, I had stepped out in the hot Bagan sun. After collecting my bags, I had rared to visit the famous temples, when the heat and the airport hassle had made me change my mind.

The Nyaung U airport had been typically tourist town functional and it had been hot, crowded with taxi operators, hotel touts and guides. Red teethed betel nut chewing men in lyongis had lunged towards every passing tourist and I had hailed the first taxi to get out of that mess. The drive from the airport to my hotel had been surprisingly pleasant and the taxi had glided over smooth flowering oleander bordered roads. Apart from the usual offers of tours, there had been no more hassling which had come my way and I had checked into the quiet Shwe Poe Eain – 1 hotel in New Bagan without any problem.

Suggested Read: The charm of Georgetown

The sleepy stupor of Bagan

The hotel had been located on a wide shady tree-lined road and the whole area, despite being dotted with restaurants, souvenir shops and stores had a distinct village-like atmosphere. Bullock carts had rested under big shady trees and their betel nut chewing drivers had snoozed underneath. Strains of old-fashioned radio programmes had floated out of the stores and women and children sporting thanaka makeup had peeped from behind the goods. A quiet siesta lull had enveloped New Bagan and I had waited in my comfortable air-conditioned room for the sun to go down. Exploring the open vistas of Bagan Archaeological Zone in the heat had been repeatedly discouraged by nearly all travel experts and I had also wanted to experience its famous sunset from atop a pagoda.

To visit Bagan is to experience timelessness

The tug and pull of righteousness over Myanmar tourism

So, I had whiled away time on the internet until 4 in the evening, reading about Burma’s incredible journey into the 21st century and the fierce determination of the very controversial Aung Suu Ki. Despite being neighboured by two massive Asian giants of Thailand and India, Burma had come a long way in maintaining its individuality and the Burmese archaeological heritage has been the epitome of the proud nation. I have often questioned my decision of visiting Myanmar (and inadvertently supporting the current human rights oppressive regime), but there had been something so magnetically powerful about the little jewel of a troubled nation, that it had been hard to stay away.

Bagan was my second stop in Myanmar

It had been perhaps, due to the way, Yangon had looked familiar to old school Calcutta despite being very foreign; the gleam in the eyes of proud tattooed faced Chin grandmothers as they had twinkled defiantly at travelers’ cameras or that the blood-red sunsets of Bagan had continued to attract travelers despite being refused the UNESCO World Heritage Site title. There is a lot of beauty and spirit left untouched in proud Burma and the newly opened up to tourism country had been a pure pleasure to discover. Although my journey into Myanmar had started at Yangon, it had been at Bagan that I had really started to feel its sublime aura. Bagan had been yet to reveal its magic at that moment and I had already been in love; Love with the old world feel, the easy relaxed pace and the incredible joie de vivre called Burma.

Can be seen at one of the

Most impressive sights of

And that is at a place called Bagan.