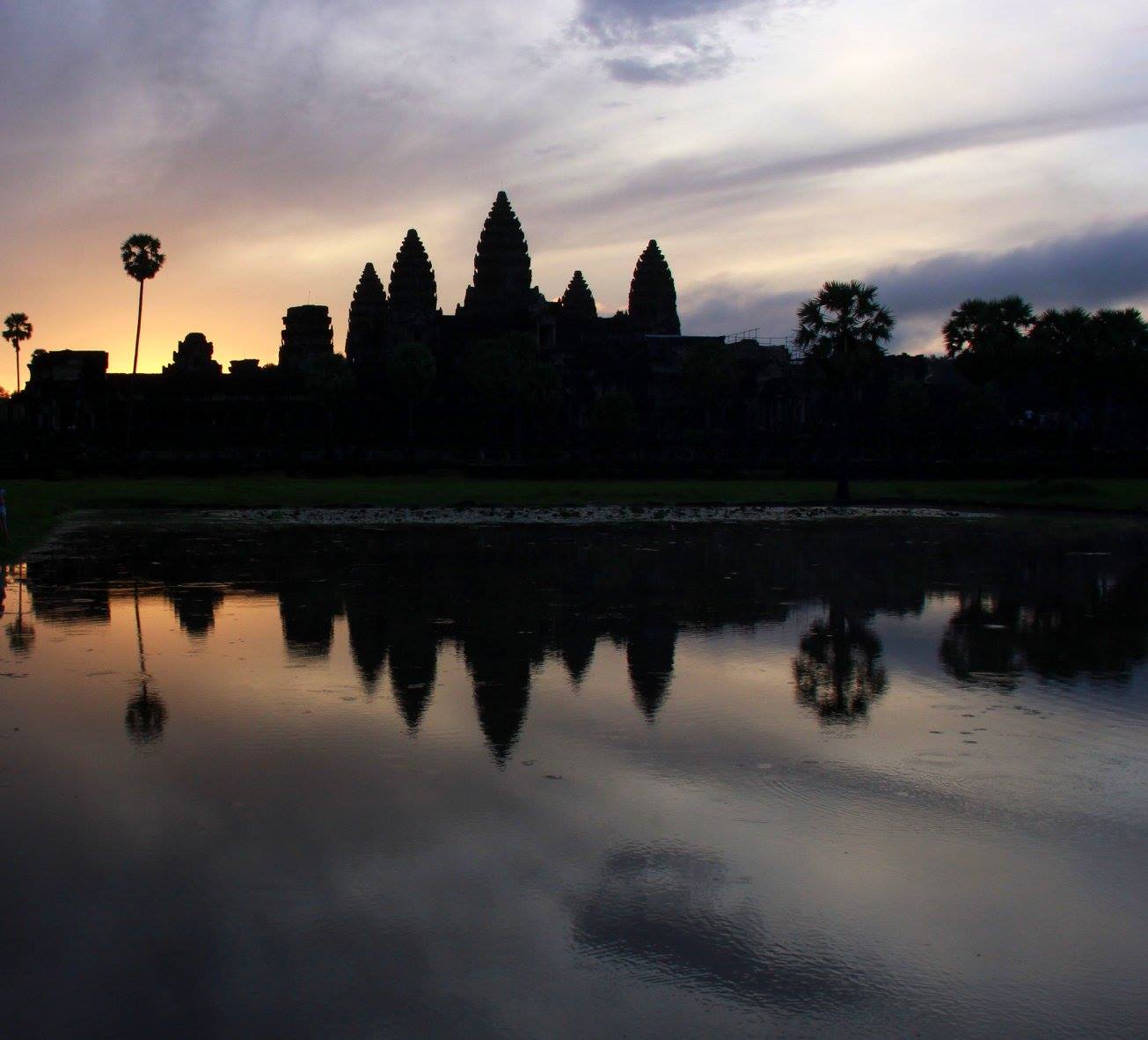 Angkor Wat, the masterpiece of Khmer heritage is undoubtedly one of the most impressive places on earth. The majestic temple is dedicated to Lord Vishnu and it is the national pride of Cambodia. Built by Suryavarman II, few destinations in the world match the aura that envelops Angkor Wat and the temple has been photographed incessantly through centuries. It took 30 years for Angkor Wat to get completed and the result has been worth the wait. Stupendous logistical operation has made this magnificent architectural feat to be successful and according to inscriptions, 6000 elephants and 300,000 workers had laboured on this project. Sandstone blocks sourced from the holy Phnom Kulen mountain, nearly 50 kilometres away, have been used to build Angkor Wat and the Siem Reap river had been busy with rafts carrying them from the quarry to the temple site.

Filled with exquisite relief work, five tapering corn cob towers, intricately carved balustrades, stone courtyards, graceful avenue and the Gallery of a Thousand Buddhas, Angkor Wat is a sight to behold and light filter through it in a most magical way. Though drop dead gorgeous during sunsets and sunrises, Angkor is a pleasure to visit at any time during the day and the lucky ones can see its dawn being framed by floating hot air balloons. Angkor Wat‘s reflection on its moat is one of the most popular travel photographs and I am in love with this Khmer piece of art. My most poignant 1st of January has been spent on the ancient stone steps of Angkor Wat and I have watched a young sun usher in a brand new year. The sunrise has been magnificent, one befitting Angkor and the first day of the year, and I remember being completely mesmerised.

The magic of Angkor Wat

The sky which was stained with various pearly shades, had later turned so vivid that it had seemed as if a rosy sea shell had upturned on top of the Khmer temple. Lilacs, pinks and mauves had slowly taken over the palette and Angkor Wat had stood silent, proud and timeless in black jagged silhouette against the play of colours in the sky. Needless to say, the moment was magical and nature had welcomed the new year with positive vibes. This was a strange juxtaposition with death, the life event which many historians associate with Angkor…but then what is death, if not an extension of life.

What awed me most about Angkor Wat, was its grand scale and intricacy and the temple has been designed on the lines of Hindu mythological universe. Angkor experts believe that visitors who walk the causeway, into the main entrance and through the courtyards to all the way to the main tower, are metaphorically going back to the creation of the universe. The main tower had once contained a statue of Vishnu and it is replicated as Mount Meru. The smaller towers are like peaks surrounding Mount Meru and the lower courtyards are considered as continents binding them all together. The moat represents the mythological oceans and the seven headed Naga causeway is supposedly the bridge which connects man to the abode of gods. Detailed bas reliefs depicting mythological and historical stories cover the temple and alluring celestial beauties called apsaras call it home.

The perfect place for a new beginning

In fact, Angkor‘s apsaras are one of the most stunning carvings in the world and their decorative detailing are simply beguiling. Each lovely lady sport a different elaborate hairstyle, which has influenced the apsara dance attires throughout centuries and much effort has been taken to restore the charm of these stone beauties. It is popularly accepted that its patron, King Suryavarman II had built Angkor Wat to be his mausoleum and I had found it to be an amazing place to start a new year. The experience had been spine tingling and goose bumps had popped on my skin as Angkor had bathed in the golden light of the first day. To me, it had been surreally similar to traveling back to the first age of creation of the universe and the entire cosmos had been contained within its periphery. Birth of universe, the finale of death, enchantment of beauty and the passage of time as represented by the stories on the bas reliefs had made Angkor an epitome of completeness and I had stood amidst them all to welcome 2015 with open arms. Incidentally, 2015 turned out to be the year of completeness for me (read marriage, settling down, digging my roots deep, conceiving a baby etc) and I too, achieved my full circle of life there. Can a new year‘s day get any more symbolic and magical than that? At Angkor Wat, magic just happens.

Place to usher in

Had been an unforgettable experience.