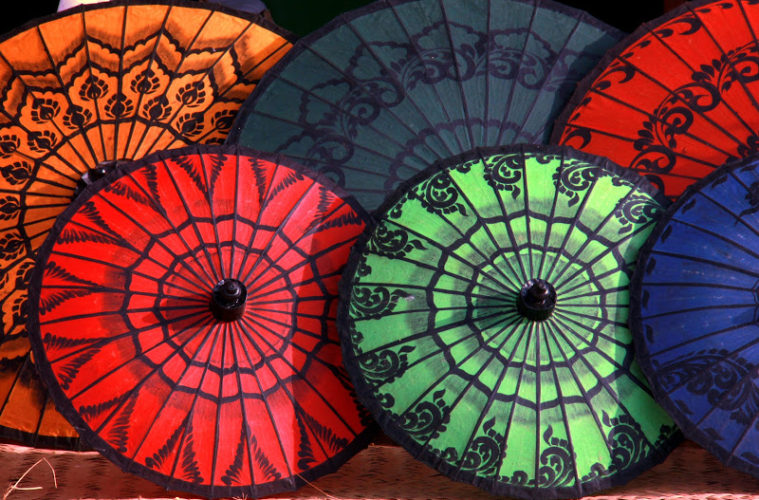 Bagan Myanmar on a short visit

Bagan Myanmar can be explored in many ways. Bicycling through the scattered temple tapestry is very popular and horse or bullock cart guided rides are pretty awesome too. The animal carts add to the timeless aura of Bagan and the combination of clip-clop of trotting hooves along with jingling bells against the beautiful backdrop is simply magical.

The region of Bagan Myanmar is naturally very beautiful and the fat and lazy Irrawaddy river runs through it. It is a dry country with blood red earth which is topped with neon green semi-arid vegetation, palm, betel nut, and other tall trees. Most of the times a wide blue cloudless sky spans overhead and the sun shines brightly. The flat land is broken into sleepy hamlets of farmers and artisans and in the distance, Mount Popa can be seen on clear days. All this and more met my eyes when I went exploring the Bagan on a motorbike with my guide. He was recommended to me by the hotel receptionist and it turned out to be a great idea to hire his services on the first day. Not only, did he help me explore the famous sites of Sulamani, Ananda, and the pyramidal Dhammayangyi temples, but also treated me to a delicious Burmese local meal.

The beautiful countryside of Bagan

Enjoy a taste of Burma at Bagan Myanmar

That was at the Golden Myanmar restaurant near the pristine white Ananda Temple and the traditional Burmese buffet came at a great price with all you can eat fun. Thus, it was no wonder that, being a foodie that I am, the greater part of my first Bagan day was spent tucking in an enormous lunch. The staple meal of rice was served with a tamarind leaf-based hìn-jo (sour soup), tray of freshly par-boiled vegetables and herbs accompanied with various dips like ngăpí ye (a watery, fishy dip), balachaung (a dry, pungent combination of chillies, garlic and dried shrimp fried in oil), bowls of goat meat curry, fish, vegetable curries and desert of pickled tea leaves and jaggery.

Unlimited cups of green tea was served along with the humongous lunch and I happily indulged in the gastronomic delight till the sky got tinged with red. The setting sun made me and the other travellers rush to one of the isolated temples and it was already occupied by people wanting to capture one of the most magical sunsets in the world. The sunset is hands down Bagan’s most magical moment of the day and it is indeed been a breathtaking sight. Though at the time of my visit, monsoon rains made the falling light was less dramatic than usual, we saw the setting sun draping a golden veil over the ancient kingdom. The deep ochre coloured temples lit up against the falling light like a thousand lamps and the monument dotted plains of Bagan Myanmar looked like one classical painting. From our vantage point atop a looming temple, the Irrawaddy river glowed like molten gold and rising dust from the touristy bullock carts trailed on red dirt roads between flat green farmlands.

Bagan Myanmar after the magical sunsets

The sunset was the most awaited time of the Bagan day and it drew huge crowds of tourists atop its highest sites. Their laughter, excited chatter, and jokes, which rang louder than the calls of the incoming birds hushed down after the sunset and a cotton wool soft silence gently fell over the old plains. Bagan Myanmar, despite not being at its most glorious self at that time, managed to mesmerize and I returned to the hotel, feeling stunned by the beauty. That night, after a quick dinner at The Green Elephant Restaurant, I searched the net to create my own Bagan temple list and early next dawn, set off to explore the area with another traveler on an e-bike.

Recommended Read: The smile of Angkor at Bayon

Start your Bagan Myanmar day as early as possible

Bagan was still sleeping when we rode through the silent stupas and a chilly mist blew in from the river. The land was partly visible in the awakening light and we quickly covered most of the listed temples in the refreshing coolness of the morning. In the hazy spell of dawn, Bagan seemed to be from another planet and spired temples, banana flower shaped stupas and ceremonial umbrellas peaked up from the dew-drenched earth. There were terracotta monuments at every turn in Bagan Myanmar and we soon lost track of the temple watch.

In Bagan Myanmar, I had a typical case of being templed out and this is quite usual among travellers visiting glorious heritage sites. The sheer opulence and grandeur often get too overwhelming and it takes a day off by the pool clear the head. After my early morning temple exploration, I spent the rest of the day enjoying the quiet village life and reading a book by the pool. New Bagan is a pretty mix of quaint village life with a cool hippie vibe and it is quite fun to walk around it. Radios of the locals of New Bagan blare grainy old songs, while reggae pours out of hip cafes. Old gnarly trees shade roads which empty in the afternoons and everybody takes a siesta until sunset. Life rushes back with the setting sun in Bagan Myanmar and it is a  relaxing routine for a few days in the famous temple town of Asia. The only break from this routine is usually made for a visit to Mount Popa and to me, it revealed yet another different face of Myanmar.

The blood red plains of Bagan

The intensity of Bagan

Can be very overwhelming

And the best way to

Is at a relaxed pace

No matter whatever you do