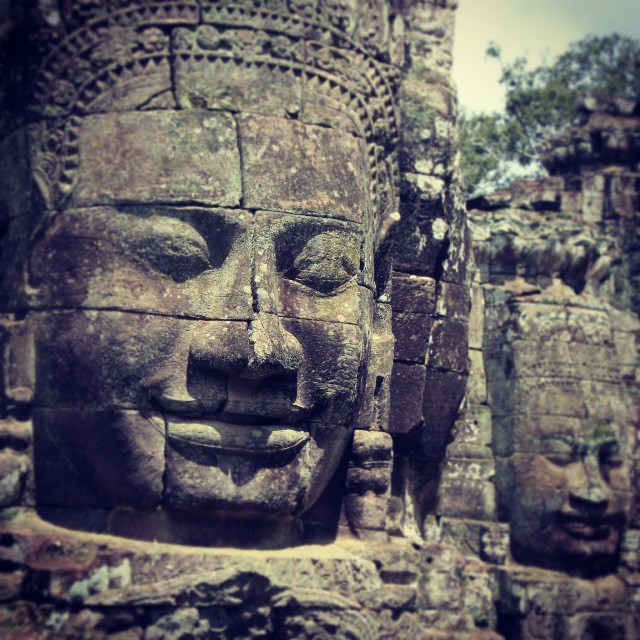 Bayon, the smile of Angkor

The mesmerising Bayon temple is one of those few places on earth which looks breathtaking at all times of the day. Famous for its towers of gigantic smiling faces, this 12th century Khmer temple reflects the creative streak of Cambodia‘s most legendary king, Jayavarman VII. These gargantuan faces belong to boddhistava Avalokiteshwara and they give Bayon its slightly unnerving character. With their broad foreheads, thick nostrils, slightly curving full lips, serene composure and deep set downcast eyes, the Bayon faces exude a strange aura and one often feels sneered at or calmed down by them. Their quiet “know it all” smiles are often described to be as enigmatic as Monalisa‘s charm and they have coined, the famous “Smile of Angkor”.

Incidentally, Bayon has a lot going for it to smile about and located slightly north of Angkor Wat, it is one of the most richly decorated Khmer temples. Technically, it was built to be the spectacular central temple complex of the ancient city of Angkor Thom and it is believed to represent the intersection of heaven and earth. Bayon was Jayavarman VII‘s ego wall and the smiling faces bear strong resemblance to the famous king himself. The architectural grandeur of Bayon lies in its massive scale and detailing and its 2 outer walls bear extraordinarily beautiful bas reliefs and they depict stories from history, mythology and everyday life. The eastward oriented temple, though built on a simple 3 level plan, maze of galleries, connecting low ceiling passageways and steps make it a very complex site to explore. Light filters through it in mysterious ways and the omnipresent smiling faces overwhelm the scene.

This is Bayon temple

Though placid, the mind bending positioning of the faces, seem to make them watch over each other from every angle and there is no avoiding their gaze. Their downcast eyes follow you everywhere and make it especially hard to concentrate on the exquisite carvings, Bayon is so famous for. 12th century Khmer life pours out from every inch of the walls and Bayon can actually take one on a trip back into time. Upon entering the temple complex from the east gate, if one moves clockwise, then the first bas reliefs he/she experiences are the famous, “Cham on the Run”. Contained in 3 levels, nearly all of them depict fierce battle scenes where Khmer soldiers fight off the Chams in every possible way. King Jayavarman VII himself appears on the third level and he makes a grand entry on parasol shaded horseback and troupes of following concubines.

Apparently, King Jayavarman VII lead a full life, whether in battle or in royal splendour and all around him, his people seem to be content just by his majesty‘s powerful presence. This is especially quite stark in Naval Battle panel, where the Khmers fought with the Chams on the banks of Tonle Sap lake. Life at Tonle Sap had gone on undisturbed and common lake people had been shown giving birth, hunting and relaxing while the Khmer army had vanquished the Chams. The war reliefs slowly give way to victory scenes and from a much relaxed king with a bow to an entertaining circus, Khmer 12th century life seem relaxed and uneventful. With so much action happening at Bayon, it is difficult to not dedicate a photo essay to this highly absorbing and breathtaking temple and this post is dedicated to the ‘Monalisa of South East Asia’, the creative genius (and massive ego) (of Jayavarman VII.

The creative genius of Jayavarman VII

TRAVEL TIP –  To enjoy Bayon in limited time, enter it from the east, go left at the first gallery and follow the arrow marked temple route plan. The pillar carvings in front of the entry tower in the east are exceptionally beautiful in classical Bayon style. Apsaras appear frequently and a typical Bayon composition sees them in a group of 3 dancing on bed of lotuses. Being roofless pillars beautiful stream of light falls through them and allow visitors sufficient light to view and photograph this motif throughout the day. The best way to view the galleries of bas-reliefs is in a clockwise manner and smiling faces can be enjoyed on the third level.

There are 2 galleries of bas-reliefs at the Bayon temple. Mythical scenes are depicted in the inner wall and on the outer wall, scenes from everyday 12th century Khmer life come alive. Bustling markets, fishing folks, festivals with cockfights and circuses, jugglers vie for attention with fierce historical battles and mythological characters. Bayon temple because of its architectural design can be beautifully photographed the whole day and sunsets are glorious there. Catch a setting sun casting a dark golden hue on the smiling faces, while lighting up the sky in blood orange colour. The temple remains open from 0730 to 1730 hrs. Entrance fee is included in the Angkor Archaeological Park ticket and it is priced at USD 37/62/72 for 1/2 and 3 days respectively.

Located in the heart

Of ancient city of Angkor Thom

Bayon temple is an architectural marvel.

It is famous for its massive scale,

It is also a great place

To catch a breather or a soulful sunset.