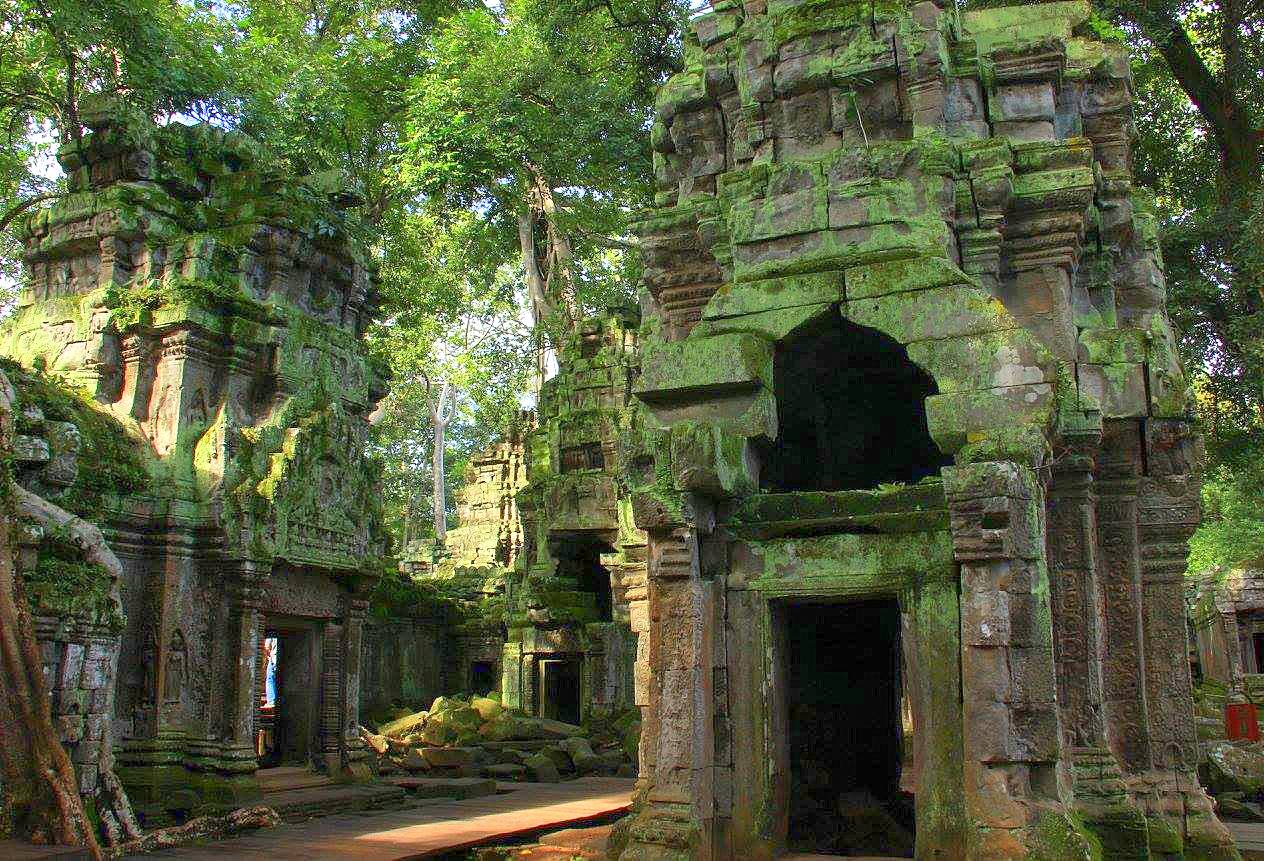 Ta Prohm is my favourite among Angkor temples and is is perhaps one of the most photographed places on earth. Crumbling moss covered stones filled with carved figures and scenes from daily life of long gone eras struggle for existence with the jungle which has nearly reclaimed the temple and sun peers mysteriously through the shadow dappled nooks. The hauntingly atmospheric ruins of Ta Prohm takes its visitor‘s breath away at first sight and the temple looks lost, like it has fallen through the cracks of time. Needless to say, this desolate mysterious aura has been captured in many Hollywood movies and Lara Croft‘s “Tomb Raider” has famously planted it on the tourism map of Cambodia.

Though not very substantially spread out in area, Ta Prohm needs a few hours to be explored completely and it deserves half a day for soaking up the strange beauty of the maze of corridors and tightly embracing tree roots. Most impressive during early morning, the sun and shade dappled ruins with their crumbling towers and hidden rooms, speak of a queen mother, whose son, king Jayavarman VII had dedicated the Buddhist temple to her. Originally known as Rajavihara, Ta Prohm was built from 1186 and the temple had nearly 80,000 people at its beck and call. Nearly 2700 officials and 615 dancers were required to attend or maintain the temple and its ruined old stones are filled with Sanskrit inscriptions which whisper about the inhabitants and dependants of the monument. Once an extremely wealthy temple, the UNESCO World Heritage Site of Ta Prohm is now in a photogenic state of neglect and it is being stabilised by ASI (Archaeological Survey of India) along with APSARA (Authority of Protection and Management of Angkor and the region of Siem Reap).

Though touted as the Khmer temple which has been swallowed up by the jungle a.k.a Jungle Book style, in reality, Ta Prohm‘s restorers have carefully weeded the dense foliage out, retaining only the large trees and the think curtains of drooping roots. This has rendered the Khmer temple its famous lost world look and it is a strong reminder of the reclamation power of nature. In fact, the jungle plays the most important part in enhancing Ta Prohm‘s appeal and the sinuous python thick tree roots seem to strangle the temple out of existence. The seeming struggle for existence between the temple and the jungle is unforgettable and Ta Prohm leaves very vivid green memories. A temple with a nice collection of towers, closed courtyards and narrow sunlit corridors, its delicately carved blocks of stones are covered with every possible kind of foliage and beautiful apsaras hide behind curtains of muscular roots.

Silk cotton, fig and other large leafy trees create a surreal green canopy and bas reliefs are carpeted with moist lichen, neon green moss and creeping shrouds. The hundreds of years old trees filter the brightest of Khmer sun in subdued shadows and a green pall shrouds the entire complex, making Ta Prohm look like a place yet to be discovered. However, this spell is quickly broken by the crowd of tourists who float in and out of Ta Prohm the whole day and aggressive sneaky touts catch lone explorers unaware. They usually pounce upon solo travellers like yours truly, tempt them with off beaten spots to be photographed and after showing them a working shrine or two, hustle for money. Despite, all these hitches, Ta Prohm remains one of Angkor‘s most atmospheric spots and it is indeed, like an Indiana Jones fantasy come true.

TRAVEL TIP – Ta Prohm is among the largest of the monuments in the Angkor complex and it includes 260 statues of gods, 39 towers with pinnacles and 566 groups of residences. The whole complex of Ta Prohm comprises of a series of low buildings built on one level, which are enclosed by rectangular laterite wall. Hardly any traces of the wall remain visible. The central part of the monument is accessible by a series of towers connected with passageway. Many parts of the temple are impassable and have been closed off to the public. The rest are reachable by narrow dark passages and carrying a temple route plan or hiring a guide is highly recommended to avoid getting lost.

The best time to visit Ta Prohm is early morning and the temple remains open from 0730 to 1730 hrs. Entrance fee is included in the Angkor Archaeological Park ticket and it is priced at USD 37/62/72 for 1/2 and 3 days respectively. For selfie fans, don’t miss the iconic Crocodile Tree. The most popular among Ta Prohm‘s muscular tree roots, Angelina Jolie‘s famous Lara Croft movie scene was filmed here. Ta Prohm hangs delicately on the thin thread of survival and much efforts are put in its restoration. Thus, it is necessary to follow the regulated guided route or wooden boardwalk and avoid climbing onto the damaged galleries. Some of these precariously poised stones are very heavy and have collapsed causing much damage to the temple and the explorer.

Once a very wealthy

It is now a photogenic ruin

Nearly reclaimed by the jungle.

It is a must visit spot

For all those Angkor visitors

From the usual Khmer opulence.