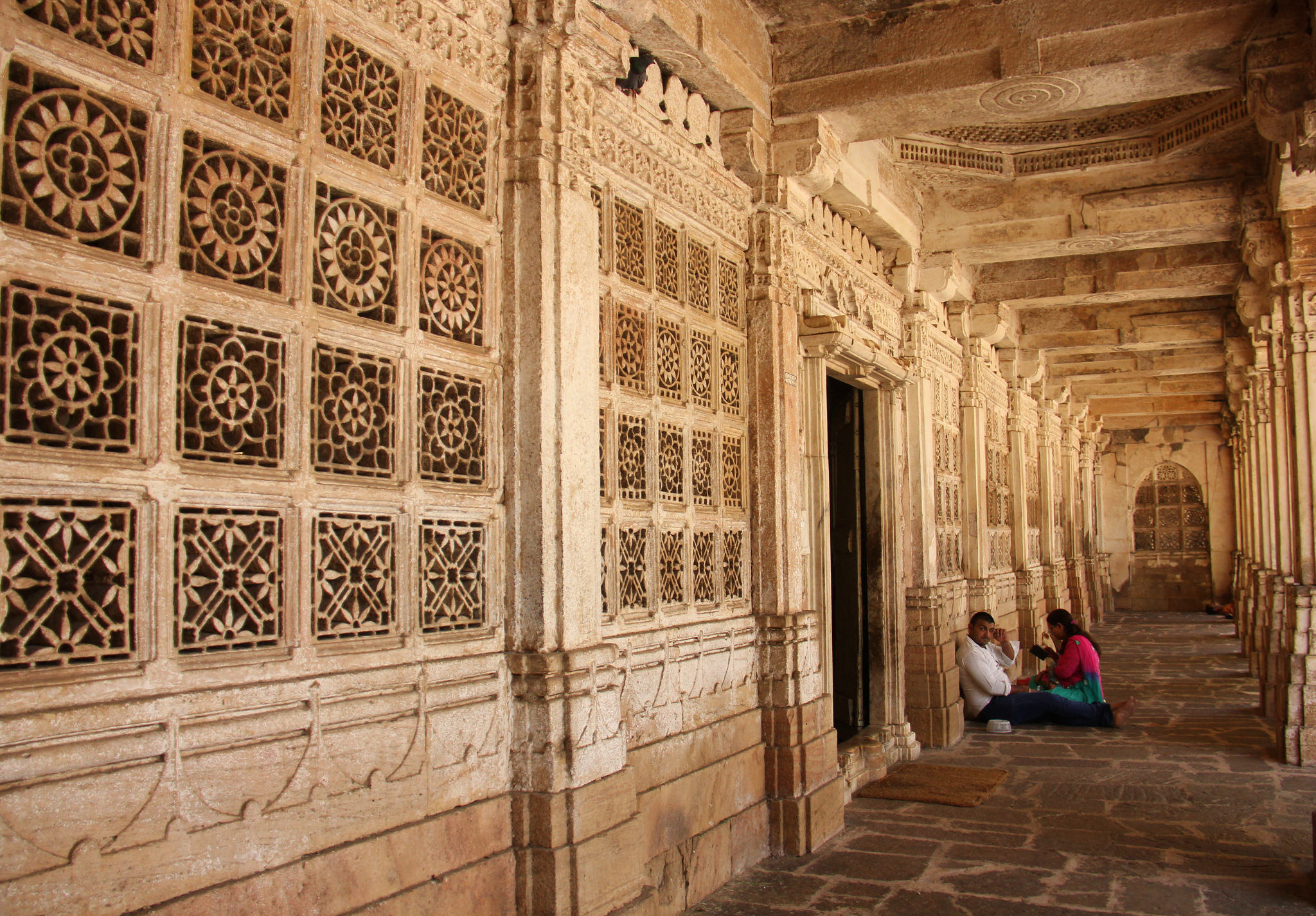 The silence of Sarkhej Roza

Some monuments are talkative. Full of motion, they pour out their emotions in endless chatter. The Western Group of Khajuraho Temples, for example, are some of the most voluble monuments I have ever experienced. The monumental edifices are full of actions, which are portrayed by their stony residents and it seems as if all of them are talking at the same time. Although drop dead gorgeous, I always found them a bit noisy and overwhelming. It is a breathtaking experience to indulge in their beauty, but the thought of spending an introspective sunset in their midst, somehow just does not feel right to me. For this purpose, I had biked over to the stodgier Eastern Group of Temples and that silent Khajuraho sunset had been an unforgettable one.

The power to be silent and soothing belongs to many monuments across the world. Their silence is louder than words and they whisper only to those willing to give them their whole hearts. Those structures do not allow commotion to build up. Rather, it seems as if they somehow manage to expand spatially in a way, that no matter how many people seek shelter within them, there is always a quiet corner for them all. I found Sarkhej Roza of Ahmedabad to be one such soul soother. An elegant, but slightly dilapidated architectural complex Sarkhej Roza consists of a cluster of monuments, which include a mosque, tombs, mausoleum, palaces, a tank, and pavilions. All the monuments are built around the tank and stone stepped embankment run all around it. It is located in the village of Makarba, around 7 kilometers away from the city of Ahmedabad and came into prominence when the famous French architect Le Corbusier compared the design of the mosque with the Acropolis of Athens.

Marked by a stark absence of an arched entrance, the mosque of Sarkhej Roza is indeed very unique. It has a flat roof which is topped by 10 flat domes and as many as 120 pillars make it different from most mosques from around the world. Built during the beginning of the Sultanate era in Gujarat, the complex was a very important center for Sufi culture. The great Sufi saint, Ganj Baksh lived there and upon his death, the reigning monarch, Mohammed Shah ordered the mausoleum to be built in his honour. The saint whose complete name was Shaikh Ahmed Khattu Ganj Baksh, was an extremely revered spiritual figure of his time and he was the official advisor of the sultan. Upon retirement, he left the city bustle of Ahmedabad and moved to Sarkhej for its quiet tranquil environment. Interestingly, at that time Sarkhej was a predominantly Hindu village consisting of weavers and indigo dyers and the great saint lived there until his death at the age of 111 years.

The construction of his tomb and the mosque got completed in 1451 AD and in the second half of the 15th century, the central tank, beautiful pavilions, and a small private mosque were added. This changed the purpose of Sarkhej completely, and it became a summer spiritual resort for the royal family. The prevalent ruler also constructed a mausoleum for himself and his family within the complex and eventually a garden grew around it. After Ahmedabad fell into the hands of the Mughal forces, Akbar took over Sarkhej Roza and he too left his mark by adding many more constructions inside the complex. These constant additions from different rulers made Sarkhej Roza an interesting hodgepodge of architectural styles. A beautiful fusion of Persian, Hindu and Jain influences can be seen its gorgeous stone trellis, decorative brackets, and the sun streams on them in a most mesmerizing glow.

In fact, that is my most poignant memory of Sarkhej Roza. It was mid day when I reached the complex and the merciless Gujarati heat made even the air smell burnt. The blue sky glared down harshly and I ran inside the cool stone complex for some respite. What I saw, stopped me in my tracks and it remains one of the most beautiful sights I have ever seen. A long stone tunnel glowed amber from the afternoon heat and intricate stone trellis of geometrical designs filtered in the rays. The play of sun and shadow created hundreds of patterns of light on the floor and the old stones seemed to bask in the warmth. An absolute silence enveloped the whole complex like a nurturing cocoon and for the first time, I came face to face with the power of Sufism.  Needless to say, I was humbled and healed.

TRAVEL TIP – The atmospheric Sarkhej Roza is located in the village of Makarba, around 7 kilometers away from Ahmedabad old city center. It is open daily from 9 am to 6 pm and is a complex. There are beautiful mausoleums, an interesting active mosque, beautiful pavilions and the tomb of the Sufi saint Ganj Baksh. It is mandatory to take off the shoes and cover the head before entering the saint‘s mausoleum. Since Sarkhej Roza is a spiritual site, sensible culture sensitive clothing is also advised for the visit. The buildings of Sarkhej Roza are unique for their complete absence of arches and generous use of beautiful pierced stone trellis. A return trip to Sarkhej from the old Ahmedabad city center by autorickshaw will cost around 200 Rs. Go there with some time on your hands and enjoy the tranquility of the complex.

More from Gujarat  Glimpses of Kutch

Famous for complete absence of arches

Today it is a crumbling heritage

And an oasis of tranquility.