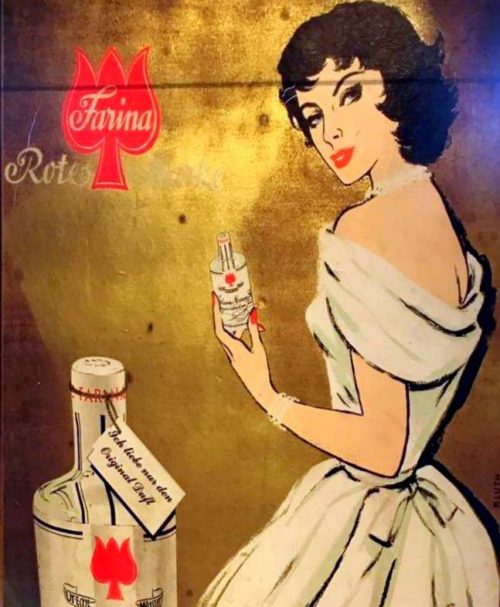 When I was a little girl, I loved smelling my freshly shaved father. He knew that I liked it, and I would get scooped up in his arms after every barbered session. I buried my face in the crook of his neck to take lungsful of his fragrance. My father used to be a very dapper man and he smelled of leather, soap, and something wonderfully fresh. I loved that smell and often found traces of it on his big cotton handkerchiefs. I remember confiscating some of his hankies, just to have that fragrance at my beck and call. That smell became one of my strongest childhood memories and till today I associate it with my father. It was much later during the grooming training of my flying days that I identified the fragrance as Eau de Cologne and it originated from a city in Germany which went by the same name.

Call it sheer coincidence or destiny, today I live in Cologne and its name is one of the many reasons why I love it here. Cologne‘s German name is Köln and the city is the origin of the famous Eau de Cologne. Also known as Kölnish Wasser, Eau de Cologne was a tribute of an Italian perfume maker to the lovely city which he called home and he also started his fragrance business here. In the year of 1709, a young Johann Maria Farina created a spirit-citrus fragrance and called it Eau de Cologne. He was from Santa Maria Maggiore Valle Vigezzo in Italy and was probably a bit homesick in the German riverine city. In one of his letters to his brother in 1708, Farina wrote, “I have found a fragrance that reminds me of an Italian spring morning, of mountain daffodils and orange blossoms after the rain”.

The new fragrance caused an immediate stir among the elite of that time and they started ordering it in large batches. It was delivered to nearly all European royal households and found takers even as far as China. Those were days when baths used to monthly (and sometimes yearly) rituals and body odour was a huge personal problem. Fashion included voluminous clothes and heavy wigs which made the stench even stronger and the addition of a heavy perfume to it created a vomit inducing aura. In such a scenario, Farina‘s fresh, light citrusy fragrance came as a boon and the demand for cologne soared. Considered as a master perfumer, Farina had an extraordinary talent of mixing many exotic ingredients and creating new fragrances such as never been experienced before.

This is Farina House.

He mixed dozens of mono essences and came up with such sensational creations, that during his time a single vial of his Kölnish Wasser cost more than half the annual salary of a common man. Thus it was no wonder, that his fragrances were popularly termed as aqua mirabilis (miracle water in Latin) and he ruled his perfume empire with an iron fist. Farina was a shrewd businessman who was a romantic at heart and he kept track of his debtors and chemical compositions with equal fervour. His vials used to be delivered in specially handcrafted casks and he monopolized the perfume business for a very long time. The popularity of Eau de Cologne, however, was too tempting for speculators to give it a miss and when free trade was established with the French in 1797, many Köln businessmen copied the name to sell their products.

You may also like : Camellia spring day in Cologne

They were often of much inferior quality and the difference between the original and the new Eau de Cologne was very stark. The secret to Farina‘s success apart from his inborn gift of an extraordinary sense of smell was the use of essences sourced directly from their region of origin. The extraction of the oils also took many months and the whole process was an expensive, time-consuming affair. He was very stringent about the quality of his ingredients and often waited years for a single consignment of ambergris (intensely sweet smelling secretion of the sperm whale which is sometimes found floating on the beach). It is said that in 1719 he complained to a Belgian supplier about his bergamot. “The most expensive bergamot you have is not good enough for me. We must find something better. I have written to Fleury how he should water the trees, but I think he took no notice. On your next trip, notice how he waters them since the whole scent depends on this”

Being a taskmaster, his essence extraction processes were also physically punishing and he had jasmine petals constantly kneaded in pork fat for days until all the oil had been absorbed by the lard. The essence was then separated from the fat and remnants of the blossoms using alcohol. His accuracy and professional excellence were very well known and he spared no room for imperfections in any aspect of his business. Even the packaging and transportation methods were supervised by him and he went great lengths to deliver only the best fragrance in the world. The popularity of his creations continue till today, and the Farina family has been producing the same product at the same place for 300 years.

Look out for the red tulip trademark.

Farina‘s fragrance formula, however, remains a top secret and it is known to only the family business members. His shop at Obenmarspforten in Cologne is the world‘s oldest fragrance factory and recently it has been turned into a museum. Interestingly, despite all these accolades, the most famous Original Eau de Cologne does not belong to the house of Farina. Known as 4711, this famous fragrance was named after its location at Glockengasse No. 4711 and it was developed in 1794 by Wilhelm Mülhens, a German rival of Farina. Both the houses have been at loggerheads ever since and in 1924, Farina‘s Eau de Cologne registered a red tulip as its trademark.

Today, cologne is a widely used generic term for any fragrant concentration of 2%-5%. Many essentials oils and their blends are used as extracts with a 70%-90% base of diluted alcohol. Usually, Eau de Cologne uses a mixture of oils of lemon, orange, grapefruit, bergamot, tangerine, clementine, lavender, thyme, oregano, neroli, jasmine, lemon leaf, olive, and tobacco. These create the loveliest and freshest pick me up fragrance and they are deliciously invigorating on a hot, sticky day. So, if you happen to be a lucky recipient of a bottle of Eau de Cologne, you are in for a pleasant experience. Splash a bit of cologne on your neck and behind your ears for an immediate mood lifting. Dab it on your hands to be applied under the arms. The alcohol kills odour causing bacteria and the scent is breezy fresh. Spritz a bit on your cotton handkerchief and rub on yourself for an instant cooling sensation.

Or simply keep a bottle or two at home, if it reminds you of someone you love. Eau de Cologne can be a great comforter and we are never too old to be daddy‘s little girl.

P.S – This blog post is part of the weekly series called the Cologne Diaries. Every week, Maverickbird will take on a new theme, emotion and beauty of an expat life in Cologne.